April 1st - When Daddy is in Charge 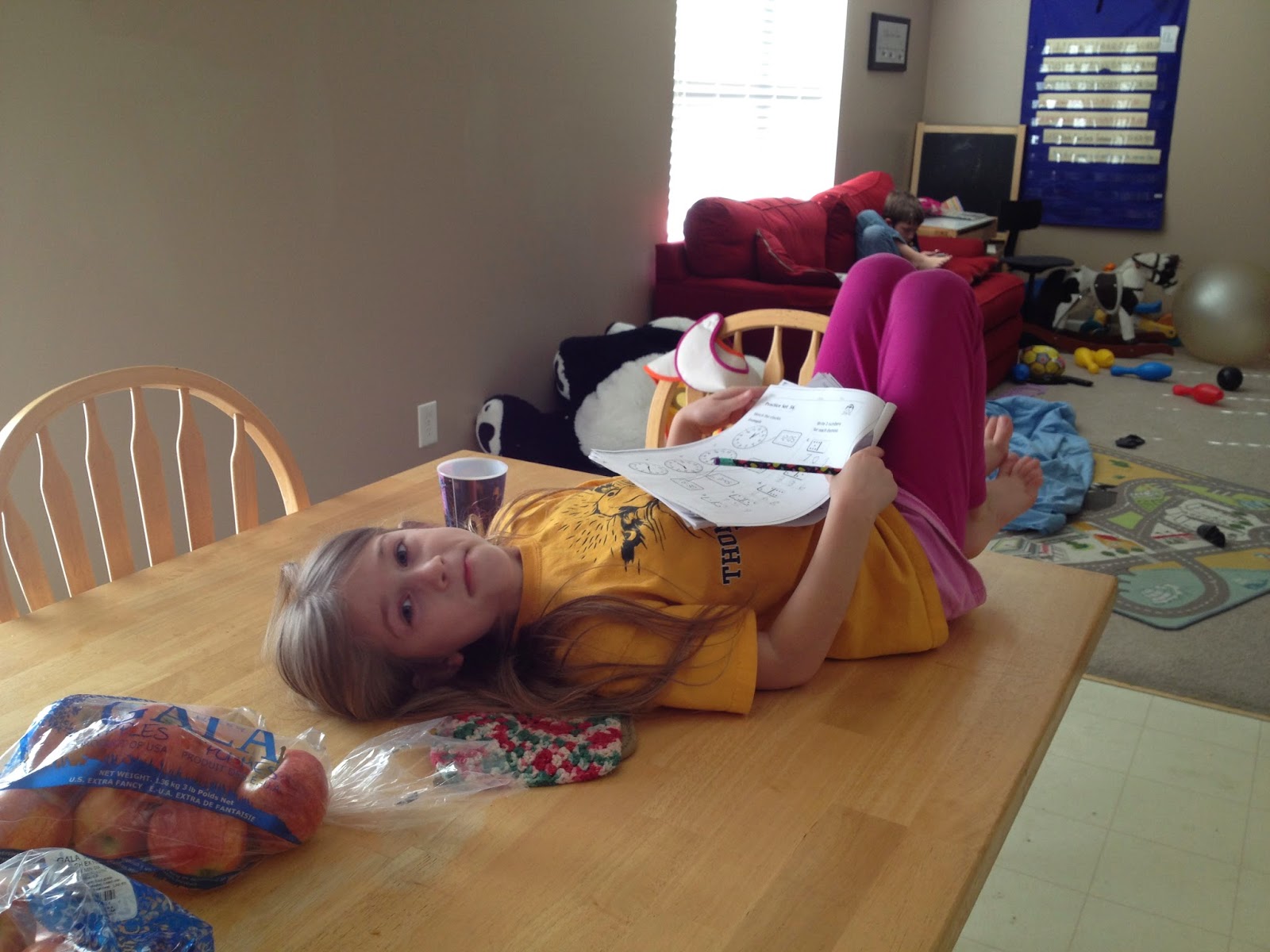 There are some years when I go through elaborate April Fools gags on my kids...mainly involving trick food but this year I just didn't have any new ideas so I just didn't worry about it.  I did get a good kick out of Gigi's choice of homework sites.  She still has a few pages of her massive homework packet left to finish and while she is not thrilled about it, she is still chugging along.  Doesn't she looked thrilled about it?  She keeps telling me this packet is not worth one lousy piece of pizza (the reward for finishing your packet).  I keep telling her keep working girl.  I probably border on the mean side of mean mom. 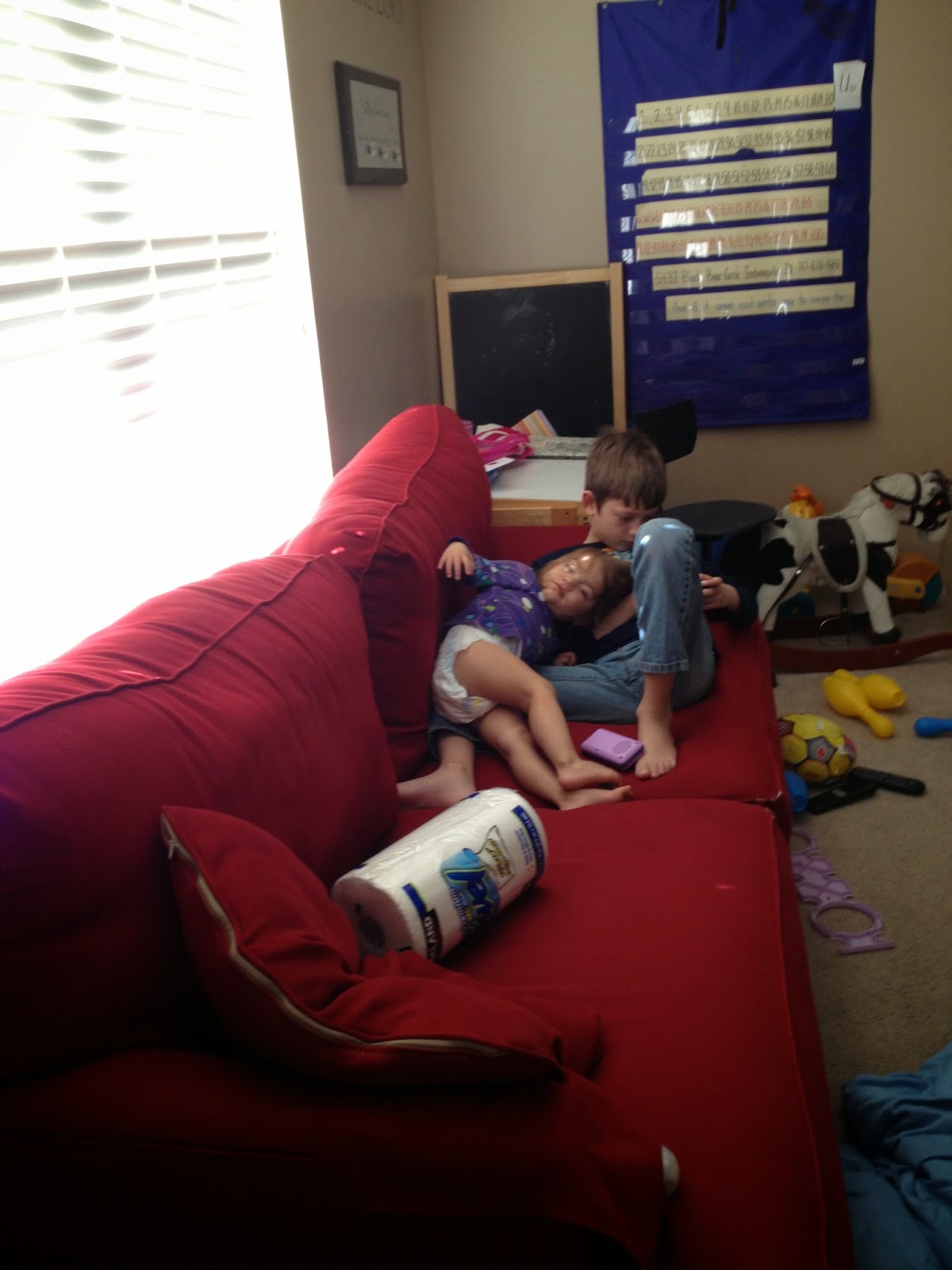 I also got a good kick out of this picture of Captain E and Cheetah.  This was during school work time.  E doesn't have a homework packet to work on so he just has reading to do.  Last night though he stayed up until two in the morning reading.  That has pretty much been the layout of the vacation.  Play all day.  Watch movies until ten pm.  Go to bed and read books until long after midnight.  Sleep in as late as mom will allow.  Going back to school next week is going to be rough stuff!  So since he's been doing all his reading at night he got some ipod time.  Cheetah loves the ipod so it wasn't hugely surprising that she hopped right up on his lap to watch some angry birds and plants versus zombies.  She is constantly trying to steal my phone so that she can watch the little movies these games put out.  Current gamer and a future gamer.  Guess that's what happens when your dad is a gamer.

Last night was a Relief Society Enrichment.  Dr. J was actually home and it was about gardening so I decided to head over.  That meant daddy was in charge.  The girls were of course thrilled with the idea.  Well at least all of them were until Peach's pants fell off.  Then she was embarrassed.  "Oh my goodness, that was so embarrassing," she said as she pulled her pants back on.  But it must not have been to embarrassing because guess what story I heard when I got home.  Apparently Dr. J let the kids out to play in the backyard while he was cleaning up after dinner.  When he came out to gather them Peach's pants and underpants were down.  "What are you doing?" he asked her.  "Dad," she says, "I really, really, really had to pee."  This is what I get for letting her pee on the side of the highway on Monday!  Then Peach says, "Dad watch out, you almost stepped on Cheetah's poop."  Because guess what people, Cheetah was out of her pants as well.  Oh boy, never a down moment with these kids. 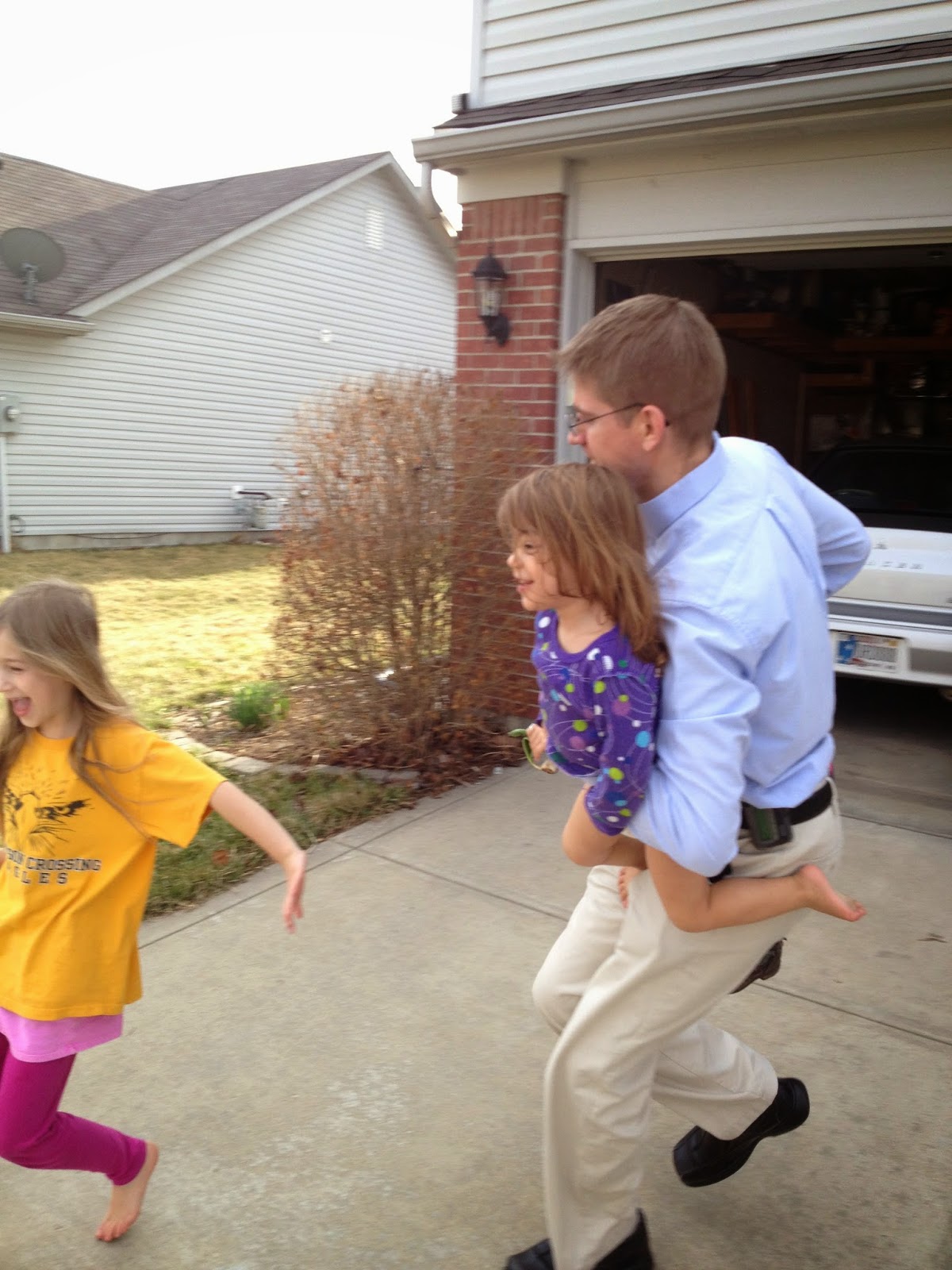 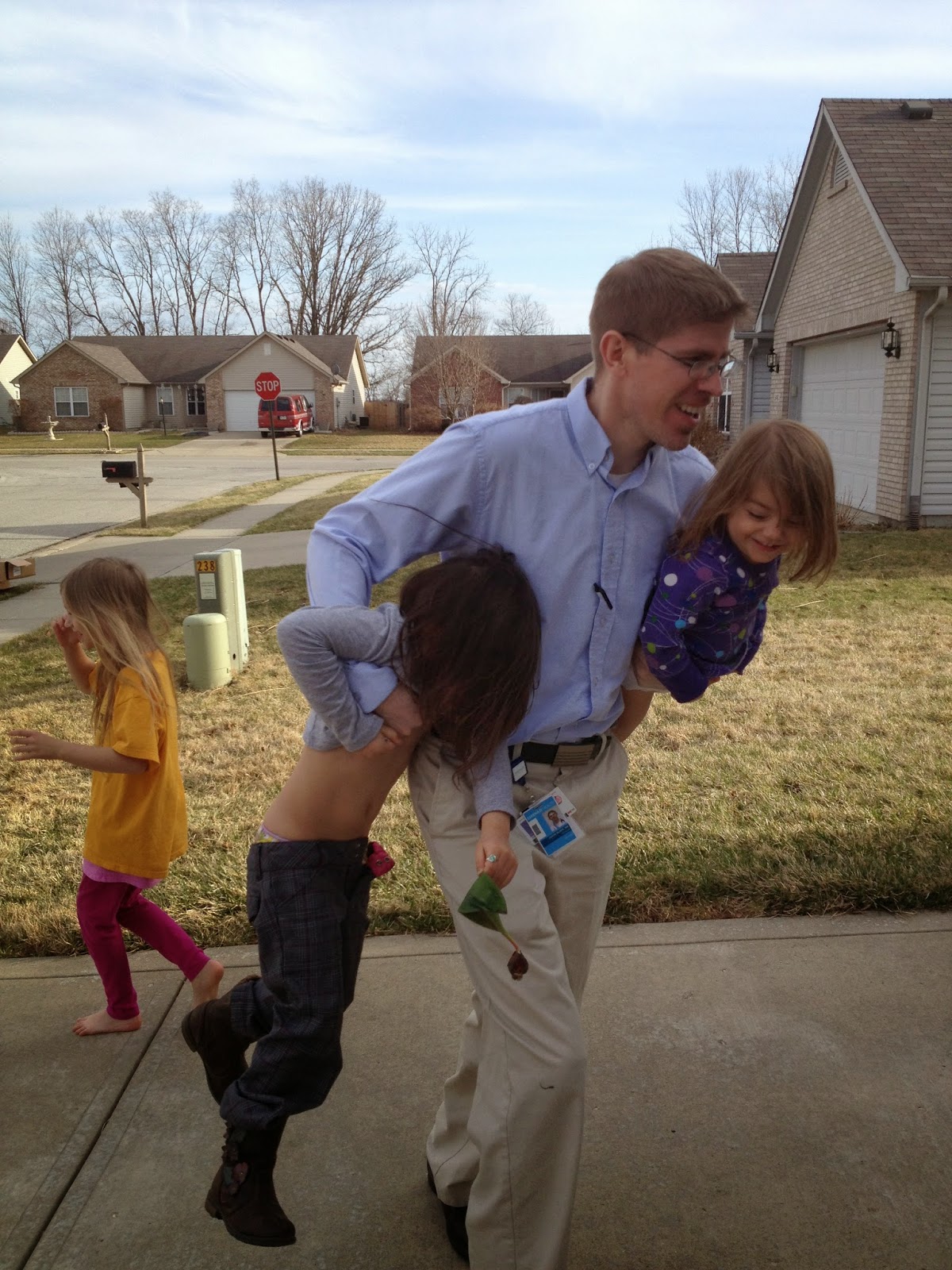 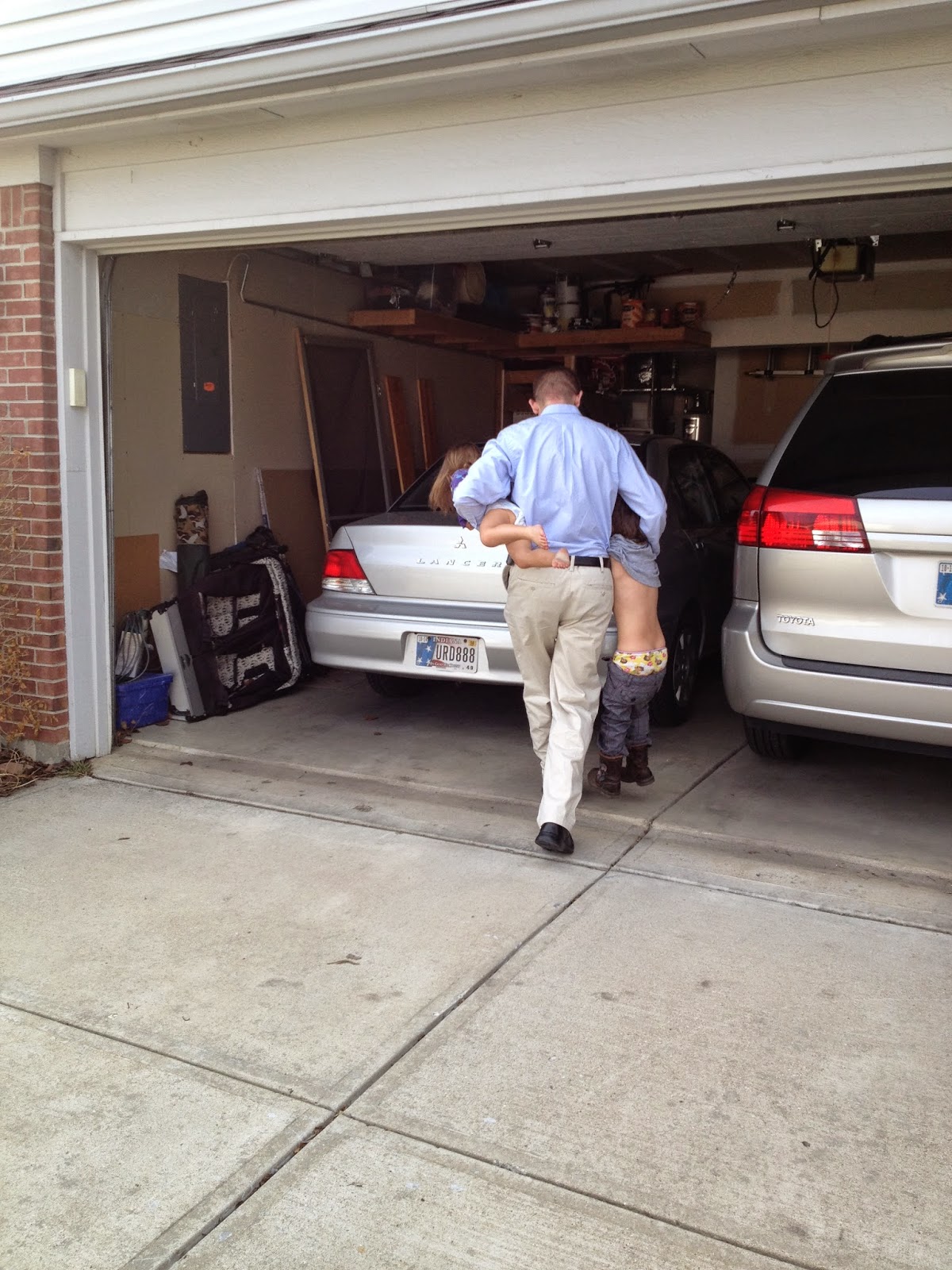 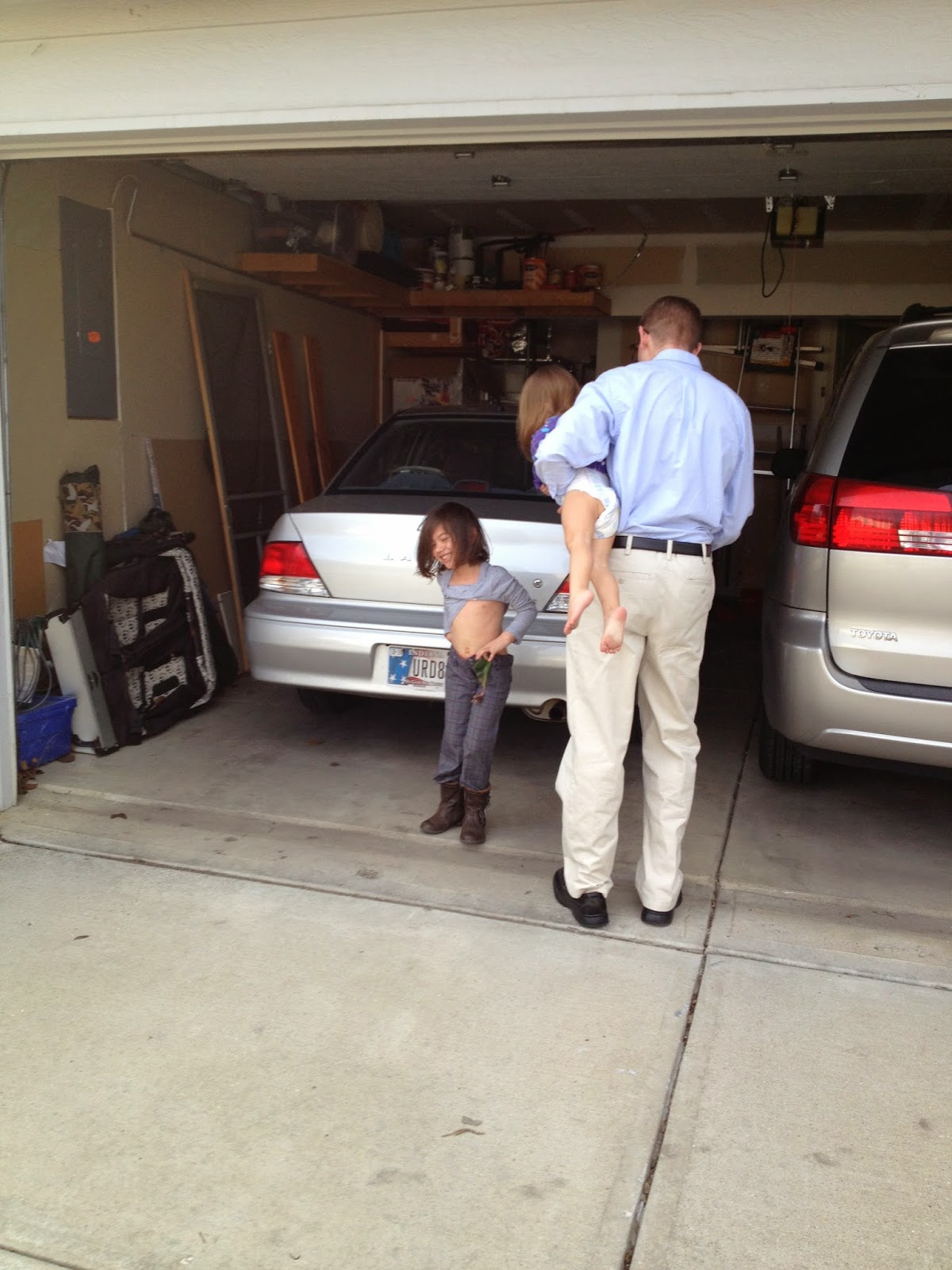 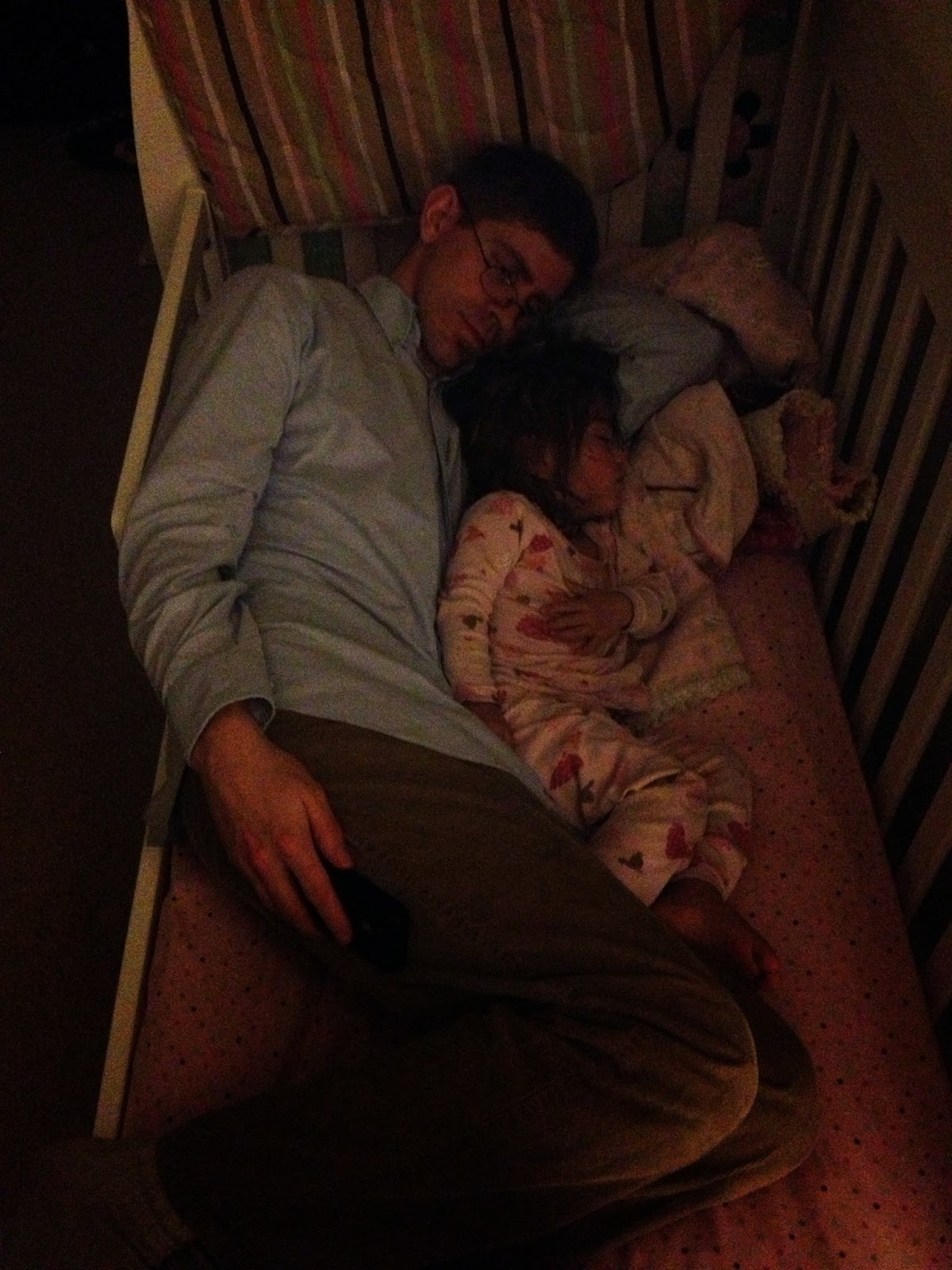 By the time I got home those messes were all taken care of (THANK GOODNESS) and this is what I found.  Guess who needed her dad to lay in her toddler bed with her to fall asleep last night.  This is how I found them.  She is such a daddy's girl and I think it is fair to say he is this girl's daddy!