Four times a year, American Educator, A Quarterly Journal of Educational Research and Ideas, comes to my house.  It is put together by the AFT union and when Dr. J started teaching for the University this was one of the perks.  The first few, I threw in the trash.  Feeling overwhelmed by the junk mail paper clutter and especially bitter toward the grad school union my husband was forced into joining I felt irritated by it's arrival.  Then one day an article on the cover caught my eye.  Since then I've been an avid reader.  It focuses on a education, a topic that with a first grader and two almost in preschool it constantly on my mind.  I remember when I was struggling with helping Captain E with his handwriting.  In popped an article not only stressing how strong the correlation was between a student's strength in handwriting to their strength in story telling and information sharing but it also included a link to a program to help kids improve their writing.  It was a eureka moment.  I love reading this journal.  It reminds me of being in school although the topic is far more applicable to my current life and the information easier to access then the science journals of my past.  The Spring 2011 issue was focused on Equal Opportunity.  Several months ago Dr. J and I watched some PBS special on education.  They mentioned that in the equal rights movement the forefront issue has become education.  This issue was great at pointing out what that actually means for everyone.  Two parts of the issue that really stood out to me, first a collection of pictures students in inner city schools took of their schools and secondly a graph showing the income gap of black males to white males with similar educational backgrounds.  I think it is human nature to put our heads in the sand essentially become compliant but this stuff really is shocking.  Check out the article, Being Poor, Black, and American: The Impact of Political, Economic, and Cultural Forces.
Posted by Glenda at 7:42 PM 2 comments: 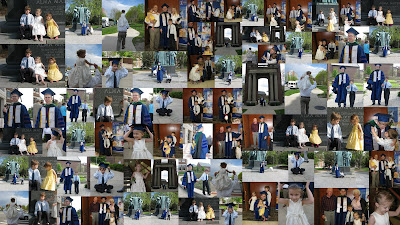 A Graduation Bananza...notice there aren't any pictures of me.  Grandpa and Grandma I'd be super grateful if you could send me a disc with all your pictures :)  Click on this collage to make it bigger. 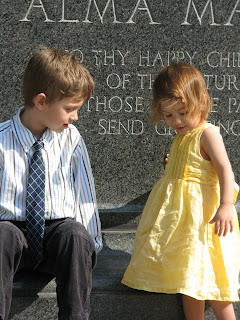 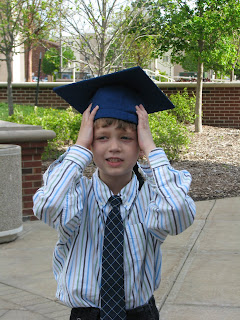 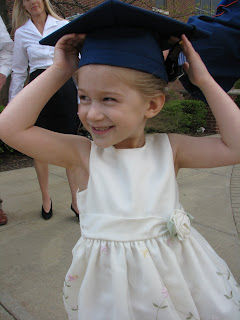 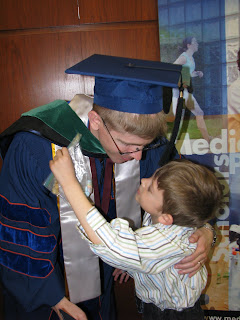 
G Bear is a budding artist.  Preschool is a great place for a girl like her.  The great thing, they give her lots of opportunity for art.  The bad, I have to find a place for all this stuff.  They do fun things I'd never think...putting sparkles between contact paper, genius.  Paint on foil something new and exciting.  The feathers on the pine cone really made me laugh.  There are twenty kids in the class, Gigi always has the brightest, biggest, most feathered, most sparkle, most ornate pieces in the class.  Every other kid had put maybe three feathers on, G bear had the piece at the top.  Then there is the play doh nest.  I told her before I left her at drop off that it would be fun to make a nest.  When I came back at pickup she had a monster nest.  I asked her, "Woe what is this."  She said, "Mom it is the nest."  "It is huge," I said.  "Well mom it is a next for a bunny, and see these are all her little baby bunnies."  "Wow that is a lot of bunnies," I said.  "Well it is a bunny." 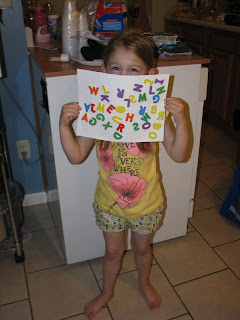 Posted by Glenda at 7:44 PM No comments:

Email ThisBlogThis!Share to TwitterShare to FacebookShare to Pinterest
Labels: motherhood 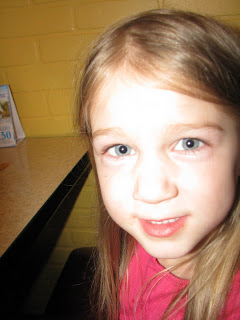 Posted by Glenda at 7:18 PM No comments:

Email ThisBlogThis!Share to TwitterShare to FacebookShare to Pinterest
Labels: food

So apparently we are at the price point of cops and sex offenders.  We've been out looking for houses twice now and could not help but notice all the cops in the neighborhoods.  The first house we looked at we drove up and said, "Oh the neighbor is a cop."  Then we went inside and found his gigantic gun safe, "a hunter?".  Nope, we opened the closet and found his dress blues...another cop!  And for the most part that pattern has continued.  We drive into a neighbor and count the number of cops there, one, two, three, four.  The most interesting part, they often are neighbors.  It makes me wonder if they are partners at work.  Can you imagine?  We decided it just must be the price point.  Residents and cops make about the same starting salary so any house we can afford, they can afford and truth be told I find a sort of security in that.

House hunting is a strange, exciting, stressful time.  Strange because you are walking through people's homes.  You try to avoid looking at their stuff and just focus on the home but it is hard to avoid the personal items.  Pictures of the kids, oddly placed TVs, floral arrangements, dirty clothes hiding in the closet (or not), the fact that dad has been sleeping in the guest room for a while since all his clothes are there...you feel like a voyeur.  It is exciting because every house you walk up to could be the one.  You pause on the doorstep as the agent punches in the code to get the key.  You look up the street, you look down, could this be my new neighborhood?  Can I live next to these people for four years?  Will I love the house?  Before the agent opens the door you just don't know what kind of excitement or disappointment awaits you.  Stressful because of the time constraints, the money spent, the ramifications of the decision on your social life, your work commute, and most importantly your children's school and friends.  Our first trip out was a total bust.  While there were a few houses we kind of liked, most were pushing the very edges of what we wanted to spend.  Our second trip we found three that were doable, one that seemed perfect.  Was it the perfect house, not quite, but it was at a great school, had a fabulous backyard that backed up to a huge grass area and then a pond, had four rooms, the office we wanted, and a loft where the kids' toys would all fit.  It was close to work, and within two miles of Meijer and Target, my two favorite stores to shop at.  The price was great and after chatting about it on the way home we submitted an offer, but we weren't the only ones.  Another couple had as well and so began the realtor's dance where he tried to weasel the most money out of us he possibly could.  We were still in negotiations when I turned to Dr. J and said, "Wait we haven't looked at the crime."  And so I looked up the crime in the neighborhood.  And that is when I discovered cops weren't the only group of people in our price point.  The neighborhood had five, five sex offenders all classified as child molesters closer to our house than the school, including one who had previously received a thirty year sentence.  There are sex offenders everywhere and while I wouldn't have liked it, one would have been tolerable, but five, five so close to the house...it was a crushing blow to say the least.  And so with even tighter time constraints than before, with less hope, more disappointment, but a better map of where the sex offenders live we will be returning next week to look one more time.  Crossing my fingers this time we find a winner.
Posted by Glenda at 5:31 AM 1 comment: