How did I get so far behind in my post?  The first day of school happened two weeks ago.  Early start, I know.  Gigi started first grade.  I met her teacher at back to school night and I got kind of a negative vibe off her, my exact thought when I shook her hand, "oh boy, she is a yeller."  Look I get it, some of us are wound a little too tight (myself included), but Gigi is a girl who moves to her own drummer.  She isn't like me at all,  as a kid I wanted to please everyone, friends, parents, teachers.  I would never dream of breaking a rule. Gigi on the other hand knows what she likes and doesn't and does not appreciate people trying to make her do things she doesn't want to do.  Sometimes it drives me nuts.  She can be super stubborn.  Sometimes it makes me glad.  I never worry about her doing something purely because of peer pressure but I also see her as the type of person who wouldn't be against breaking a few laws if she felt they were unjust.  I can imagine having to bail her out of jail someday because she broke into a medical lab and let all the animals loose.  That is just how she rolls.  So when I talked with her teacher I got the control vibe off her I started to worry a little.  Her teacher last year was so excellent at ignoring the stuff that really wasn't that big of a deal, dealing with the stuff that was without turning it into an issue and keeping school an overall positive experience for Gigi.  I'm wasn't sure, shot I'm still not sure that this teacher will be able to do that, so I'm keeping a tight eye on things.  The first week, wasn't so hot, she got in trouble three of the first seven days, but since then she's been progressively doing better, she even got an outstanding one day.  Who knows, maybe she sees the point of the behavior chart now or maybe she just had a super stellar day but I'm feeling a little more hopeful then I did the first day.  And the truth is Gigi doesn't mind and as long as she is still excited about learning then this mom is ok.  You know the kids who cries when the teacher yells at the class (me), that isn't her.  Do you like her outfit.  She picked it out herself.  This girl loves leggings :) 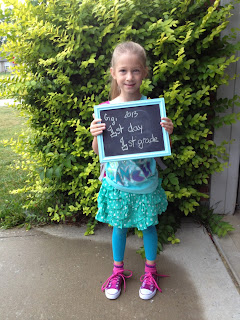 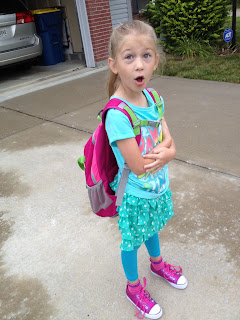 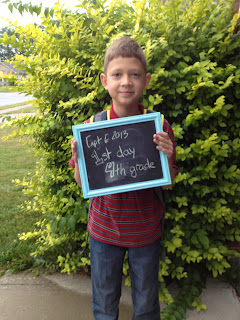 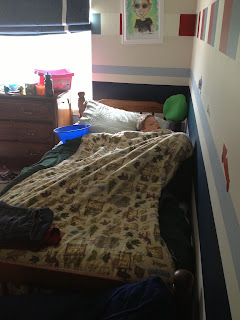 Captain E is in 4th grade this year.  What the heck!!!  How did this happen???  His teacher is amazing!  I mean if there could be love at first sight, this wouldn't be it, because the first time I saw her she was squinting at something on the board and had kind of funny grouchy face on, but the second we walked in the door and she turned she had the most genuine smile.  She rushed up and grabbed my hand and turned to Captain E and said, "Tell me all about your summer."  So really it was love at first word.  Captain E has his own struggles with school, he is extremely introverted but she is pulling him out of his shell.  She is so positive and fun that he loves being in her class.  The only hiccup this year for him, I sent him to school sick on the first day.  Can you believe it?  I still can't, but I got this call from the school at 1:30.  "Captain E hasn't been feeling well all day, and he has a fever.  Can you please come pick him up?"  Seriously so embarrassing.  So I picked him up and tucked him into bed.

Email ThisBlogThis!Share to TwitterShare to FacebookShare to Pinterest
Labels: family