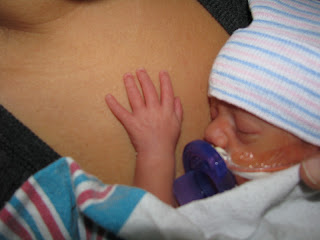 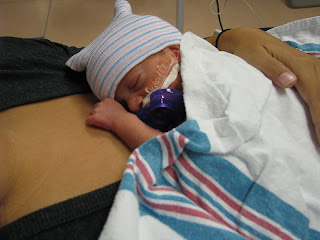 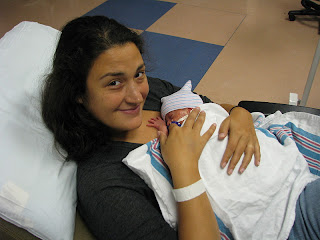 So we are over a week old now.  Still unnamed.  I blame daddy.  We have a list of about fifty names but we've put so much pressure on ourselves I think we are just choking it up.  We want a name that works with a particular family name, that has a good flow, that sounds nice, that has great meaning.  It's harder then you would think really.  Or maybe we are just making it that way :)  Cheetah is completely off oxygen and is now up to 18ml of breast milk every three hours.  So far she is tolerating all her feeds well and we are hoping that she will soon be off TPN which would mean no more PICC Line...aka, no more tube hanging out of her head :(  Cheetah is doing so good, as good as any little preemie can do!  Yesterday on her one week birthday, when I walked in to the NICCU they had her in clothes.  It took me back for a second.  First off I was excited to see her dressed but there was a little twinge of dissapointment that I wasn't the one who was able to pick her first outfit.  Is that even rational?  Sometimes I wonder if I've moved into a realm of irrationality.  The nurses told me they like to get the preemies in clothes as soon as they are stable because it brings a type of normal to the experience and it makes parents feel like they are looking at a baby rather then just a small wrigling thing.  It is hard to see where the normal is considering my daughter is taken care of 3/4 of the time by someone not me but I guess when we are talking about looks I can kind of see that.  While I love my daughter and can appreciate her perfectness even in it's mini size there are times when you get overwhelmed by the skiny appearance, the bagging of the skin around the knees, the smallness of the feet and hands, the tubes and wires going everywhere.  We are still having trouble deciding what color her skin will be.  Will she be darker like me, the color of Peach, will she be like Captai E, Gigi, or as light as daddy.  Funny how we've got such a spectrum of color in our family.  Well hopefully she will be ablet to at least tan a little.  Speaking of which how do you like my ring tan in that picture.  I have quit wearing my wedding ring.  It makes it easier to not worry about transfering germs or getting it gunked up, especially since you are constantly washing your hands or dousing yourself in hand sanitizer.  Today I told Dr. J I'm not putting it back on until she comes home.  He thought I said, I'm not putting it on until we get married again.  We were standing by the elevators and he looked down at me and smiled.  I asked him what was so funny and he said, "I was just thinking you are the kind of girl I'd like to date."  And I laughed and told him, "Well I guess this is the point where I should warn you I've got kids, lots of kids."  And he laughed and said, "I'm good with kids."  This has been a difficult experience for our family but it brings me hope that rather the strain our marriage at all we are more deeply united, and with the exception of the name fiasco knit together as close if not closer then we ever have been before.  I can't help but reflect on how my impulsive decision to marry some random boy I'd known for only 7 months at the age of 21 has been the most important and positive decision I've made in my entire life.