This is my favorite preemie time.  It's called kangaroo care and you get to hold your baby skin to skin, using your own body to regulate out your babies temperature.  It can be a little awkward getting down to the skin.  Imagine trying to take a bra off discretely in a room with five or six nurses next to a windowed room of six residents.  Yes almost all of them are woman, with the exception of little miss' resident Aaron, but still there comes a point when you kind of want to keep your nipples to yourself.  I've tried a couple different shirts and am yet to find the perfect shirt.  They want you to wear a button up because it is easier to get the baby in, but that makes it hard to maneuver undergarments.  For not the first time in my life I find myself wishing I could go without a bra.  A button up t-shirt would be the best...keep your eyes open.  Lucky dads don't find themselves with such dilemmas but they do have a time limit of an hour and half because apparently they make baby to hot, but there is no such limit on moms and so I got to hold this sweet little thing for 3 hours, between her feedings, so comfy!  At the end of three hours my daughter started to get really fussy and the thought entered my head, "She hates me.  We have missed our bonding moment.  How is this going to effect the rest of our lives."  Because isn't that what mom's do?  Agonize over every little thing.  And then my daughter started rooting around and I realized, she doesn't hate me, she's hungry.  Can you believe it, just a tiny little thing, with a mouth really not even big enough to fit on her mother's breast, all of the milk she's ever gotten delivered directly into her stomach by a tube and yet here she is looking to eat.  Pure instinct!  The will to survive, pure instinct from infant-hood on, even little tiny infants. 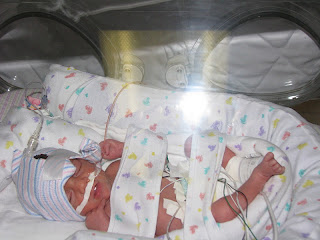 For the last few days little miss has been receiving nutrients and fluids through a her umbilical stump.  At five to seven days the stump can no longer be used.  Parents have to make a decision, they can either have a picc line put in or have nutrients delivered through an IV that has to be moved every 1-4 days.  We opted for the picc because we just didn't see how she had enough veins to continue to do IVs, but truth be told the picc does give me the creeps.  They tried both her arms first but blew out a vein in each so they moved to her head.  The result...my daughter has bad hat hair, or more precisely bad hair for her hat.  Turns out I wouldn't have been able to put her in a knitted hat even if I'd had enough time on bed rest to finish one :)  Hopefully she'll be done with her picc soon. 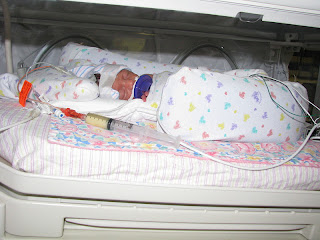 This is how my sweet little girl gets her feeds.  Through her picc she gets a mixture of simple sugars, lipids, and proteins broken down to their elemental parts, feed directly into a vein.  The other half of her feeds go through her ng tube and are breast milk that I've pumped at home.  She started with 3ml ever 3 hours and today moved up to 5ml every 3 hours.  So far she has tolerated all her feeds and if she continues on this path, avoids GERDs or NEC   (I swear preemie life is all about numbers, monitors, and abbreviations) then we can get that PICC out of there!  This girl loves a pacifier and the nurses always make sure she has it in her mouth while they feed her, so that they can prime those instincts about sucking and eating even more. 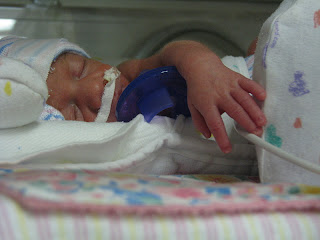 My favorite picture of the bunch!  I think it gives you a nice idea of her size.  That is a little preemie pacifier, actually smaller then the ones they gave us for our newborns when they were in the hospital and compared to little girl they are huge!  Love her little fingers.  Everyone kept teasing that she must have had sharp little nails and that's why my water broke but I think the proof is in the picture, those are pretty much the smallest softest nails I've ever seen.


Really things are going great!  In regards to our daughter we are in a place of cautious optimism which seems like a pretty darn good place to be.  Captain E, Gigi, and Peach are doing great.  Grandma has the routine working better then I ever did and they are thriving under her care.  All three of them want to help bring her home quicker and the way they want to help is with her feedings.  Gigi likes to help me put the pump on, yes it is a bit awkward but no one can accuse me of making breastfeeding weird for my kids :)  Peach likes to turn the pump on, Captain E helps fill the syringes and put on the labels.  I have great kids!  On the c-section front, boy was I feeling the pain today.  Pretty sure that going to the grocery store five days after a c-section was not a good idea.  I had told little ladies nurse about it yesterday and today she laughed when she saw me limping down the hall to the bathroom.  "So you overdid it a bit yesterday did you."  I just had to laugh with her...nothing else to do but cry right :)  My hormones are starting to settle a little bit and I can now walk into the NICU room without crying every time, still cry a little but not every time.  If I see any of the nurses who took care of me during my bed rest stay though I'm still a mess.  This morning when I went in, I had to get a nurse from triage to let me through to the NICU.  Turns out it was one who had done a lot of my strips and when she came up to give me a hug I burst into tears.  I don't think it is an exaggeration to say that I will love the women of the labor and delivery unit all of my life.
Posted by Glenda at 5:20 PM