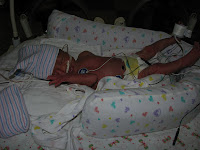 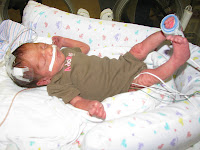 Look at me, look at me!  Got to love the outfits.  It really does make Cheetah look a little more baby like...tiny, tiny baby like but a normal little baby non the less.  Yesterday I went to church with my children and my mother-in-law.  I figured I've got drugs and a binder, it can't be any worse then laying in bed all day.  Not that I've gotten to do much of that.  The thing about having a preemie is going to see your baby is a little bit of work.  They aren't just sitting in the bed next to you.  Getting to my baby takes scheduling, planning, a twenty minute drive (done by someone else, I'm still on restricted driving), a nice little hike into the hospital, etc., etc.  One of the doctors said to me "Wow you are moving around a little faster today."  I had to laugh because what choice do I have.  Anyway though so what excuse did I have not to go to church, especially since it was time I could spend with my other kids.  Kind of a return to normal although it really struck me how many babies there are in our ward.  It seems like every other family has a little one to pick up, to nurse, to cuddle.  It was a little painful.  I mentioned to my husband a few days ago I was jealous of our neighbor who had her baby just the day before I had mine.  He said, "Oh but you don't want to wish ill will toward someone else."  I had to think about if for a second since I've never thought of jealousy as wishing ill will.  I think it just means I want the same thing she has...like we can have it together.  I'm happy for them and when life settles down a smidgen I totally plan on going over to say congrats, I just wish I could still be pregnant when I did it.  I laughed yesterday when I realized I wished I was still pregnant, that I actually missed it.  I mean seriously how funny is that.  Anyway I also had the realization at church yesterday that for me, as a preemie mom the question I hate the most is "SO WHEN IS YOUR BABY COMING HOME?"  I probably had six or seven well meaning members/friends ask me that yesterday and it either brought me to tears or nearly almost there.  I'm not mad at anyone, I know they mean well, it just isn't something I want to talk about right now.  I wonder, from other preemie moms, was that your least favorite question as well?  Because the thing is I can talk about how fabulous she is doing, up to 22mls of breast milk every 3 hours, being weaned off the TPN today, only having the PICC line in with clear fluid for the next few days to see if we can wean her off it, gained a whole ounce last night, but that doesn't mean she's coming home tomorrow.  The answer to the question is PROBABLY EARLY JANUARY.  Everyone doctor we know has given us that date.  A few have said, if she continues to do exceptionally we can POSSIBLY bring her home for CHRISTMAS!  Which last time I looked at the calendar was nearly two months away, a truly long slog.  So if you know me, please pass the word around that Cheetah probably won't be home until her due date, January 9th, and if we are really lucky late December.  It just makes it easier to deal with if I don't have to think about it often.  Sometimes living in denial is just an easier place to be.
Posted by Glenda at 12:02 PM