I was in a mood today.  Originally I started a blog post about it.  Last night I actually said the angriest prayer I think I've ever said.  I was mad, I was livid, but mostly I was just disappointed.  I had a good cry in the arms of the good man I married and then I slept on it.  I woke up feeling quite the same but I just don't feel like talking about things that will make me angry today.  I reserve the right to finish that blog post later but for today I just want to share some pictures my cousin posted of my Mama Elenita, my paternal Grandmother Elena Parra.  I don't actually know my dad's parents as well as I would like to.  My parents go divorced when I was seven and to say that my grandma didn't like my mother would be an understatement.  We did not get invited to a lot of the family parties even when my dad did happen to be in town but before he moved to Texas he lived with them so I did have a year or so of my life when his weekend paternity visits would be held at their house.  When I was still visiting Arizona I'd also swing by and visit her and I send her pictures of my children and Christmas cards and she always responds with shakily written letters about how beautiful they are and how much she loves us.  She is 96, I guess shaky hands are to be expected.  The biggest hindrance to our relationship though is we don't speak the same language.

We actually never have.  My dad didn't immigrate to this country until he was in his mid twenties and his parents and siblings came shorty after that.  I'm guessing my grandma has been here probably coming up on forty years but when you think about the fact that she was already in her fifties when she came she just didn't see the need to learn any English.  Meanwhile I was born during my dad's immigrant insecurity days when he insisted that my mother and he only speak to us in English so while I learned how to understand some Spanish because mom became fluent to talk with my father and grandparents I speak very little and three years of high school Spanish didn't do much to flush it out.  As a result we've never had any deep, meaningful conversations and even the letters she writes me I have to take to my husband to have him translate the words I don't know.

I do know she is an interesting lady though.  Her father and his brother were some of the first Mexican converts.  We have LDS church history books written about our family and every once in while they get mentioned in the Ensign.  One time we brought family history stories in to primary and I brought one in about my uncle who was shot by Zapatistas.  One of the men teachers in our ward read it and said, "Well someone much be confused.  This is a great story but we were suppose to bring in family history stories."  It actually brought me great pleasure to say, "Um, that is my family history."  She served three missions in her life. I'm not entirely sure if they were all before she got married or after.  She then married a LeBaron.  I don't know where she met him, maybe on one of her missions.  They had a daughter and then her dad got wind that his family was refusing to give up polygamy and was worried she'd end up with a polygamist so he and my uncles kidnapped her back at gunpoint and had the marriage annulled.  At least that is the family lore.  The thing is I've never actually be able to confirm this story from her because I've never been able to ask her more then for dinner or to say thank you.  Isn't that a tragedy!  Seriously folks it is the worst.  It is totally believable though that this could happen.  I know my Aunt Violeta's father was white because all her kids ended up with blue eyes.  I also know that my great uncle was the equivalent of a federal judge and totally had the power to have this done.

I don't know what life was like for he then. I assume she moved back in with my great grandfather.  Maybe she went on some of her missions then.  I know she didn't get married to my grandfather for quite a while after that.  There was enough time that when they finally got married and the seven kids they would have (five that survived to adulthood) Violeta had a pretty good start on them.  My dad is the second oldest and by the time I was born (his oldest) Violeta's kids were all in their teens and early adulthood.  Then she raised five kids.  At some point she decided to sell of part of my great grandfather's land and use it to send my dad and uncle and then the rest of the family to America.

By the time I came around she was already an old little lady.  She was the kind of grandma who wore house slippers and moomoos.  She made this really weird oily spaghetti, and would feed me sugar free candies, tamales she bought from neighbors, oranges from the trees in her back yard, and a water melon juice drink that I've only ever seen her make.  The weird thing about those sugar free candies is that when I was a child she had diabetes but one time she met with Thomas S. Monson, who is now the prophet of the LDS church and got a blessing to be healed, and now she doesn't have diabetes any more.  This story was actually confirmed from her mouth to Dr. J one time when we went to visit.

My grandmother loves pictures of her grandkids and great grandkids and keeps them all over her house.  I heard that since the last time I've been there she made posters with each grandchilds children on it but I haven't been there to confirm that.  She also can not say my full name and is the reason I go by the shortened boy name version because she has been calling me that my entire life.

The only other thing I can really tell you about her is she is teeny, like there is no way she is even five foot tall and she has the smallest little hands and feet you've ever seen.  When I was a child they used to call me gordita because I was so "huge".  Guys I went back with J recently and looked at all my old kid pictures and I was just a normal healthy looking kid.  But I guess to them I probably did seem huge because by four years old I was already almost to her shoulders.  I have a picture kicking around somewhere of her trying to carry me around as a four year old.  It is comical.  I'm not going to lie, that nick name definitely gave me a complex.  But without further ado her she is. 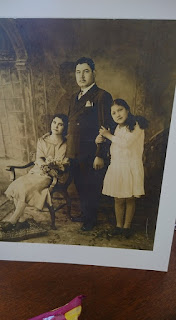 This is mama Elenita her father and I'm guessing her mother.  I've heard stories that this is actually a step mother but I'm not for sure. 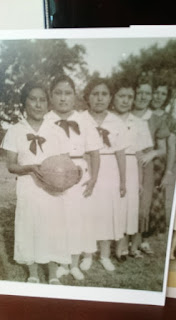 Here she is at school, second from the front.  I wish I had an idea of how old she was here. 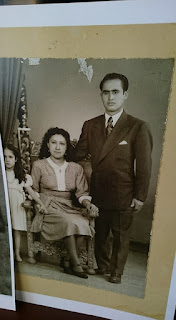 Here she is sitting down.  My aunt Violeta is on the left my Papa Perez is on the right.  Just so you know he is also extremely short and those short legs and a long torso I definitely got from him! 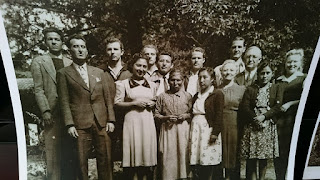 Now these two I think are from when she was younger before she married my grandfather.  The bottom one has her father and mother in it.  The top one I have no idea who all those white people are.  It is possible this is from one of her missions but I'm not sure.  You know what is crazy about the above picture, my grandma is super hsort and look how much shorter the two ladies standing next to her are.  Oh MY! 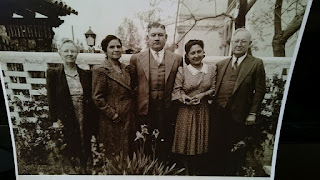 Finally this last one.  When J and I were going through these pictures I was like, "Wow she looks so much like my cousin Peggy and doesn't look anything like me."  And my husband was like, "Are you kidding me?  She looks just like you."  I didn't see it until we got to the last picture and then I was like, "OH MY GOSH."  Guys those are my eyebrows, my lips, my annoying check bones that have no definition, my jaw line.  So yup, now I know, I look a lot like her.  I actually probably look more like her than either of my parents, so there you go, just a little more proof that I have serious problems processing my own self image.  This also makes me extremely mad at myself that I never bothered to make my Spanish good enough that I could ask her about these stories.  What a wasted opportunity :( 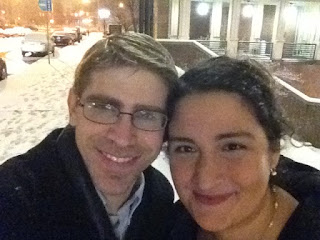 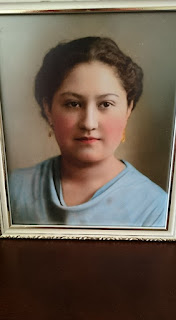