I've been reading Bridget's Mom's Blog since she put it up as a link on her Friday Link Up.  The last two post she had mentioned her college years and it made me remissness on my own.  We lived in the same dorms that have now been torn down.  When I was typing her about them I actually remembered them quite fondly but now going back through pictures I realize they were quite grim.  Maybe it is best they were torn down, but in the years they were up they housed lots of happy memories.  I lived with five other girls, two to a room and we shared one bathroom although if I remember correctly it had two showers and two toilets in it.  We also had a kitchen with a dinning room table and a small couch where we could have visitors.  I hadn't originally planned on going to Brigham Young University.  I really didn't have any plans for college at all besides the fact that I wanted to go.  I'd just been enjoying my sophomore year of college when my family life exploded.  My step-father ended up going to prison, my mom and I were fighting all the time, all my friend were going to go to college the next year and I was just feeling very alone and so I decided to leave high school early.  I skipped Junior year, did Senior year at a totally different school, randomly applied to three colleges, Arizona State, Northern Arizona University, and Brigham Young University.  I'd been there once before to visit my friend Robby before he left on his mission.  Brigham Young offered me the best scholarship and so at seventeen years old my mom packed all my stuff into a van and drove me up to college.  She left me with my grandma and then headed back to Arizona. 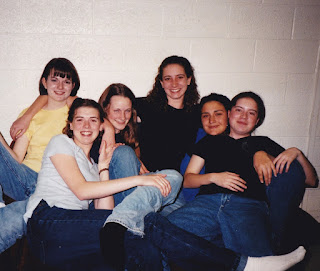 The first person I met when I moved in to my new dorm was my bedroom mate Amy.  She was from Northern California and honestly we got along really great.  We also had Candace next and Becca.  Candace was only 17 as well and came with her associates degree already completed.  She went to medical school and is now a ER doctor in Nashville.  She married an attorney and they have two kids who I swear are just mini versions of themselves.  Her room roommate was Becca.  Becca had an early birthday so she turned nineteen shortly after we moved in.  Her father was a religious teacher at BYU and her parents lived only a few miles away but she had craved some independence.  Her little brother was a junior in high school and we were close in age. He used to come by a lot and one of my favorite memories from that year was when he showed up at a party we were throwing with a date and then spent a little too much time talking with me.  His sister came over to giving him a little lecture about it and he yelled out, "You are my Delila." Becca was the second one of our group to get married.  She went off to California to do the Mormon wife thing but a few years ago she went back to college, started writing stories, and cut her hair short.  A few months ago she rainbowed her Facebook picture and I wished desperately I'd kept in better contact.  Being a liberal Mormon can be super isolating.  You don't want to miss out on friendships with others like you.  Whitney was the first in our group to get married.  The summer after Freshmen year she and I worked at Heritage Halls manning the buildings for visiting groups.  We had a boss who took a liking to her and she took a liking to him and they were engaged before the summer was out.  He teaches high school band and they live in Iowa somewhere.  The last roomate was Shana but at Christmas she moved out and Jessie moved in.  I honestly don't know what happened to Jessie.  I know Shana married a dentist but I lost contact after that. 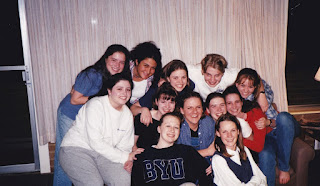 We were also really close to the girls who lived next door, although I've only kept in contact with two of them and then last year when I did a major facebook purge I lost contact.  Kristin right next to me is married with kids.  Lindsey with the BYU sweatshirt married a guy who is a music professor at LSU.  These girls were my lifeline during this first year of being away from home.  They also weren't always that great for my grades.  I would go to class in the mornings, go to work in the afternoons and then get home and want to play.  There was always someone who wanted to play when I got home.  Sometimes I was good and did homework and sometimes I just wanted to play. 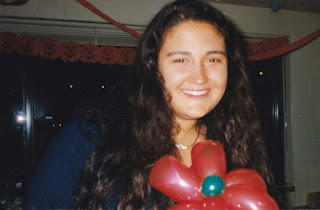 Me at my 18th birthday.  My mom always wanted to throw birthday parties for me but I was just not into it so the year I left for college she decided to throw one for me.  She got my one friend from home to take me out to dinner while my roommates decorated.  When I came home my house was full.  Thanks mom.  It was embarrassing but fun! 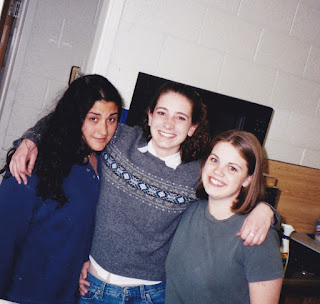 Me, Amy, and Kristin 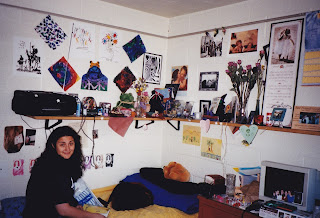 My dorm room.  It certainly was colorful.  Oh look a boom box.  I can't believe my kids will never know what that is.  Oh and look at that super old computer.  It didn't even work.  I had to go to a computer lab to type all my papers.  It is had to imagine a kid going college now without one.  I guess things were harder back then ;)
Posted by Glenda at 6:00 PM