What To Get the Kids For Christmas

It is almost mid November here and I have no idea what I want to give my kids for Christmas.  Ok, well I have an idea, but it is rather Grinchish, because what I want to give them is NOTHING!  I love my children but our house is stuffed to the brim.  Don't get me wrong, in the grand scheme of things of stuff they have compared to most American children they are probably somewhere in the middle.  They do not get everything, they aren't particularly spoiled, but they definitely have everything that they need and also a lot of things that they want.  That stuff takes up space and also because I have four children, one who is a tornado, it gets everywhere.  Recently I've started keeping half the toys always put up in the guest room, throwing stuff out, and donating stuff but when I think of adding to their hoard I just get ill feeling.  It's why when Cheetah had her birthday a few weeks ago we actually got her nothing.  Grandpa had sent her the absolutely perfect gift.  We let her unwrap it after cake balls and she was in love and ran off with her toy.  I was glad we'd gotten her nothing else because she really got to enjoy that one toy and we didn't have a huge mess to deal with.  I've been thinking about Christmas, and trying to figure out how I can still keep it fun for them and let them know I'm thinking about them and love them but not just fill our house with more toys that are just going to get added to their already overwhelming amount.  Here are some ideas I've been kicking around.  Let me know what you think.


For Captain E I've been thinking about buying him his full scout uniform.  This stuff is not cheap and so far I just haven't bothered to get him any.  We are talking around $80 to get him completely outfitted.  Maybe it isn't the most exciting gift in the world, but he loves scouts and I think he'd be excited to have his uniform.  I figured I could throw in a $15 itunes gift card, a book, a new pair of pjs, and maybe a tackle box so he'd have his own when he went fishing with his dad or his troop and call it good.

For G-bear I've been thinking that maybe it would be fun to get a 3/4 basic sewing machine, some fabric, and teach her to sew.  I have a friend who majored in home economics in college and is a sewing genius.  I'm not her, but my mother taught me basic sewing as a girl, and my mother-in-law bought me my own machine when I became a mom.  I use my sewing machine at least a couple times a year to hem pants, make curtains, baby blankets, or make simple pieces of clothing.  It's actually something I supremely enjoy even if I'm terrible at it and it is something I think she'd love, plus it is a skill worth having, and it would give me some one on one quality time with her.  I'd also get her a book and a new pair of pjs.


For Peach I've been thinking about this pretend school set.  Peach is obsessed with playing school and makes me play it with her on a daily basis.  I think she would love this set and it would fit perfectly in the desk we already have downstairs in the school corner. 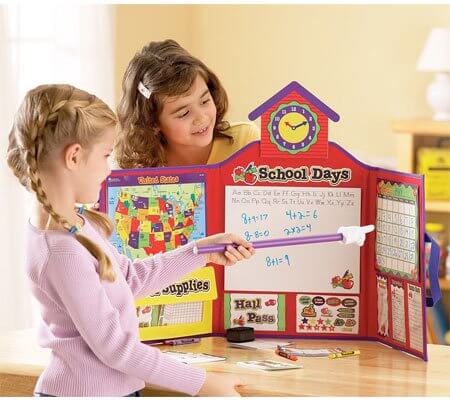 What I really want to get Cheetah is this....

Yup feel free to judge.  Look parents with two kids and a husband who is around and parents who live close so all four of you can go to the children's museum, this is about safety.  I've got three kids, a tiny tornado, two hands, and hubby who works all the time.  Sometimes I just want to know she's right next to me and not walking off after some random person.  If I promise not to drag her through the store on her belly would it make everyone feel better?  Would it make you feel better if I said I'm mote likely to get her this grow with me trike.  Our friends daughter got this for her birthday and Cheetah was in love.  Plus next year when she's going to be home all alone with mom while her siblings are all in full day school she might prefer this to a regular stroller. And that's it.  Nothing else, finished.  What do you think?  Will they be happy or will I have mutiny on my hands?