Traveling With Kids - Getting Passport Photos 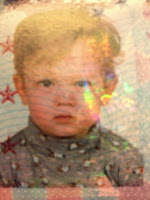 Dr J woke up this morning and insisted on putting together a list of things to do today.  Then he went to work to play catch up so most of the list was inherited by me.  I'm not going to lie, I was a little annoyed by this.  Mainly because it was Saturday and all I wanted to do was sit and read books but since sometimes you have to be adult I figured I should do the things on the list that had to get done.  One that is an absolute most is getting the passports for the kids, but before we can submit the forms (did you know you all had to go...kid, mom, dad or in this case kid x's 4, mom, and dad).  So I figured getting the pictures taken today seemed like a good way to go.  Since I was on my own and I just didn't want to spend a ton of time trying to make sure the dimensions of the heads were right I just headed over to Walgreens.  When Captain E  was one I took him to a professional photographer to get his photos done.  They did a great job putting to what I like to call his baby prison photo.  The quality was great but there was a wait time and seeing as this trip is racing toward us the need to get these applications in is now!  Even though the quality is so/so they are fast, relatively cheap, they have a little program that lines up the eyes and head for you so the size will be right, and if by chance the government rejects them they'll take them over for free.  Oh they also happen to have a coupon out right now...so if by chance you need a passport photo and are going to Walgreen get two dollars off.

Getting passports photos with four kids was a little crazy.  They had a little screen that they sat them in front of and then said, okay don't smile and hold your head still.  Captain E did the best at once again looking like someone rehearsing for a prison photo.  I have no doubt his photo will be accepted although every time I look at it I feel like I'm looking at a cloudy day.  This kid can not keep his eyes open when he knows a photo is going to be taken.  They start watering and her starts looking miserable.  WE ARE INSIDE!  Does not matter.  Just bring the camera out and it always happens  On the other hand I think Gigi's photo was the best in the group as far as acceptable passport photos go.  Her head is not tilted, her eyes are open, she isn't smiling but she's got a little hint of a smile there. 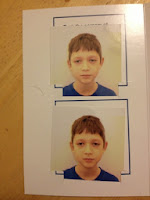 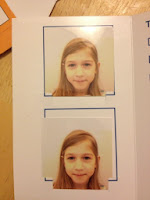 These are the pictures I'm not entirely sure on.  Peach could not keep her head straight.  She just kept tilting it back and forth, giving a mischievous little smile and doing her crazy eyes where one is opened twice as big as the other one.  The lady took a bunch of different photos and this was the best one we could get.  I kept straightening her head and telling her this was suppose to be a serious picture but she is four.  If we were in the UK I know they would take them.  Their head straight no smile rule doesn't come into play until 6.  Here I think it is up to the person filing and accepting the paperwork.  Then there is Cheetah.  Oh my gosh I love that little smile of hers.  She definitely doesn't look like a baby going to jail.  I just hope they will take it. 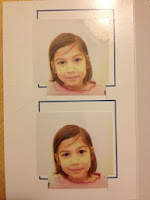 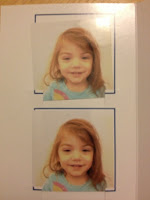 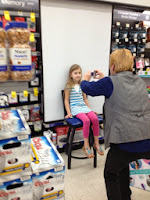 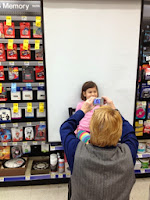 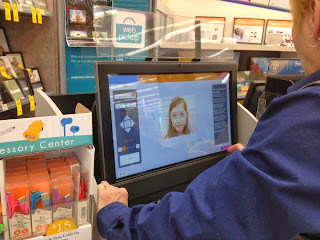 Here is that nice little program they have, makes sure the the head is in the right place, is the right size, and the eyes are where they should be.  Apparently it makes it easier for them to run the facial recognition software, because you know there are lots of criminal masterminds under the age of ten ;)  Oh well, let's check this errand off the list.  Next step, headed to the post office to turn their passport paperwork in.
Posted by Glenda at 11:30 PM