Pulling Teeth - Our Tooth Fairy Is A Bum 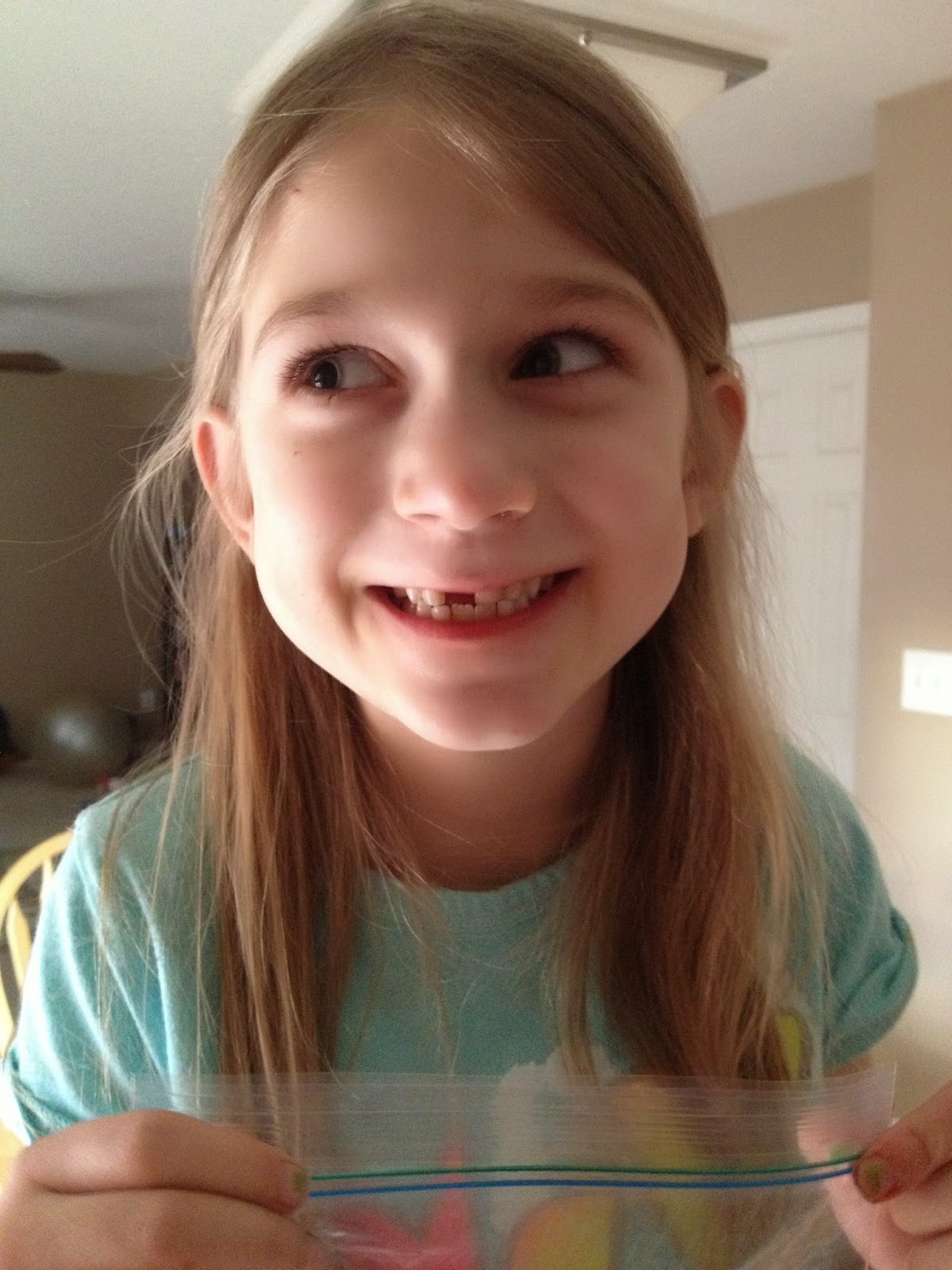 As an extended breast feeder I've always thought it was a blessing that none of my kids got any teeth before they turned a year old.  A blessing for me that is, when my two oldest went to kindergarten and neither of them lost a tooth and got to be put on the lost tooth chart they were both pretty upset about it.  Luckily by first grade they finally started to make some progress.  I say luckily because most of my sister's teeth never got loose and she'd have to go to the dentist to have them pulled when the new ones would grow in behind.  Yikes!  But these kids get loose teeth.  Last week one of Gigi's top front teeth started to get really wiggly.  Now there are two schools of thought in this house.  My husband was the kid who the second a tooth was loose would start wiggling that thing as hard as he could and then have a parent yank it out.  I was the complete opposite.  I would wait forever, until the tooth was barely hanging on by a thread, the rest of the gum had completely healed, every bite was painful as that sharp end would poke back up into the gum and then, maybe then I would finally twist it out.  I think I let my parents pull just one tooth and was like, "NEVER AGAIN!"  So far the kids fall somewhere in the middle.  They've let teeth be pulled although they aren't huge fans of it, so usually they just eat lots of apples and wiggle it out themselves, but in a much timelier manner than I ever did.  This tooth though was getting pretty loose and Gigi seemed a little reluctant to touch it.  Finally I said to her, "Hey how about you let dad look at it, and if we get it out you'll get that dollar even sooner."  One thing my kids are obsessed with is hording money, so she reluctantly agreed.  Dad got some dental floss, made a little loop and then tried to flip it out by tightening it by pulling on the ends.  The first time, it slipped off.  I said, "Just let him try one more time and then if you don't want it he'll stop."  Slipped off again.  The third time as she started to get a little wiggly about it and said, "You promised."  I totally threw Dr. J under the bus and said, "you promised just one more time."  Even though it was obviously me.  Somehow he convinced her to do it and that fourth time was a charm, the tooth went flying.  And then she starts bleeding and crying.  I felt a little bad about that, but a minute later she was all smiles so I guess it was ok.   She told me later she wanted to keep the tooth. I was like, "Sure" because here is the honest truth, what do I need with a whole bunch of baby teeth.  Then I completely forgot to put the money under her pillow.  And here is our family secret: Our Tooth Fairy is a total bum.  For whatever reason I just cannot for the life of me remember to sneak in after the kids are asleep and put the money under their pillow.  So in the morning I went in and said, "Hey have you checked under your pillow?  I think there might be something under there," and then I shoved the money under.  I'm not entirely sure why we keep up this facade.  Before Christmas I forgot so many days in a row I finally just handed the dollar over and said sorry.  Why don't I just do every transition like this?  I mean after all we are the family who does not hype up pretend home invader holiday friends.  We don't do Santa although 3/4 of our kids still totally believe in Santa.  They get presents on Christmas and they never think to distinguish who they come from.  We do Easter baskets on Saturday but we never say they are from the Easter bunny and if they ask we say they are from us.  We give small threats at Valentine's Day and on St. Patrick's Day but the kids also totally know they are from us.  So in some ways I think, wouldn't it just be easier to say, look you are going to lose 20 teeth, here is a 20 dollar bill.  Just chuck those things in the garbage when you are done, or let them pick out their Christmas or Easter gifts or set up their own holiday treats, but then I think there is just something sort of fun about the surprise of it all and so maybe that is why we still put the money under the pillow....at least when we remember to.  Oh and just on a side note on this video, I love that Peach was cheering Gigi on so much because as soon as the whole thing was done she said, "I am NEVER GOING TO LET YOU PULL A SINGLE ONE OF MY TEETH!"