A Cruddy Day and Two Loaves of Bread

I'm having sort of a bummer day.  It started out with me running late.  Dr. J didn't have to leave for work until 8.  You think that would have been some sort of help but instead it just meant I was delayed getting everything started.  So at 7:50 I was scrambling to get kids out of bed and dressed.  Then we were running downstairs to get breakfast, pack lunches, and get the two olders out the door so they would make the bus.  Normally then I'd just head out with the youngers to preschool and the gym but today I need some extra stuff.  Our car was overheating two days ago so we'd scheduled an appointment to have it looked at.  Because the mechanic is right by the gym I needed to pack clothes so I could shower at the gym before heading over and lunches so that we could just eat at the play area of the gym before our appointment rather than drive home and then just have to turn back to drive to the mechanic again.  It wasn't a huge task but when you are already behind every little extra bit is an annoyance.  Oh yeah and then there were the ants everywhere.  Dr J was in charge last night and apparently the dishes he left in the sink were a major ant attraction so before we could leave I also needed to load and start the dishwasher, fold a small load of laundry, and start a new load.  Does anyone else ever get the feeling that they are in the level of the paddle game when all the balls split up and start going every direction.  Motherhood=like having six balls coming at you from all directions.  So finally we got in the car and I realized I hadn't eaten anything for breakfast so I ran back in and mixed myself up a green smoothie.  Then we really were ready and we got to preschool only 15 minutes late.  I did my workout, took my shower, and than we picked up Peach and went to the playroom with her friend S.  S's mom and sisters showed up and we ate lunch while the girls played.  That part of my day was nice.  Then S took Peach home with her and Cheetah and I headed over to the dealership. 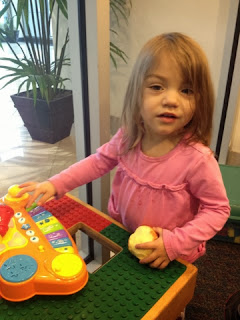 We only had to wait for an hour but in that time Cheetah got super restless....the kind of restless that freaks me out for being trapped on a plane for 20 hours.  She got tired of Toy Story, my phone, the toys in the room and was soon running around the show room trying to sit in cars.  People how am I going to keep her contained, entertained, and not get kicked off a plane?  Finally the guy came out with the bad news.  The car is overheating because the radiator is leaking, which is why when I checked it two days ago there was no coolant in the tank. " It is going to cost 826 dollars (FYI that does not included taxes) to replace and flush the system.  Also just so you know the left front caliper is leaking which will cost you another 240 to fix and your rear front axle is leaking.  That will be another 340. So basically we are looking at $1500 (once you add tax in) of repairs for the van."  Of course I had to pay $100 to get this information.  This is after last month where we had to pay $375 dollars to fix Dr. J's car and $650 to patch our roof.  Seriously people how do you save money?  I'm pretty sure this is why we are so lousy at saving money and are always getting ourselves into debt.  Is it even possible to save when it seems like every month we have a $1000 in extra expenses.  "I need to talk with my husband," I told the guy and loaded Cheetah up into the van that is a lot less safe than I originally thought.  I came home and crawled into bed. Sometimes being a grownup is overwhelming.  We have this huge expensive trip coming up and I'm trying my hardest to squirrel any little extra bits of money toward that, but with this barrage of bad luck it feels nearly impossible.  Stress was making me depressed and I just wanted to hide away in my bed. 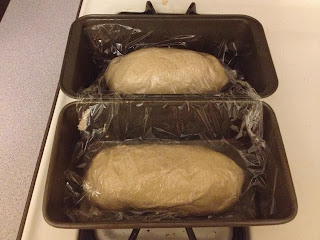 After a couple hours of hiding away in my room I finally came down to make dinner.  While I was whipping together breakfast sandwiches with frozen English muffins I found in the freezer (a great dinner for overwhelmed moms) I realized I didn't have a single loaf of bread left in the freezer and not a single slice left.  I've been trying to do this only shop every two weeks thing and I'm totally lousy at it!  I mean really, really, really bad!  I already had to break down at the beginning of the week and go and get more fruit because we were almost completely out.  When I realized the bread was gone I just wanted to cry but then I realized I could just make two loaves.  So I pulled out some yeast, sugar, flour, salt, and butter, and I tried this recipe here for the "best homemade sandwich bread".  The only thing I did differently was I did a mix of white and wheat flour and I used my Bosh to mix it .  There was something extremely satisfying about making those loves.  I'm grateful for a mom who gave me the confidence to cook and my friend Erica who years ago taught me the signs to look for for great bread making.  I still don't know what the future holds for the car and what we can afford to fix.  I still don't know about the trip, how we are going to make this happen, how we will survive the plane trip, how we are going to be able to afford this crazy thing if we keep having so many expenses pop up.  I don't have any idea on this two week grocery shopping thing, if I'm going to be able to actually figure it out, if it will lower our grocery budget, if we are even going to stay in grocery budget this month.  I just don't know.  What I do know though is that tomorrow because of my two hands we will have bread and for that one thing, today I am grateful.