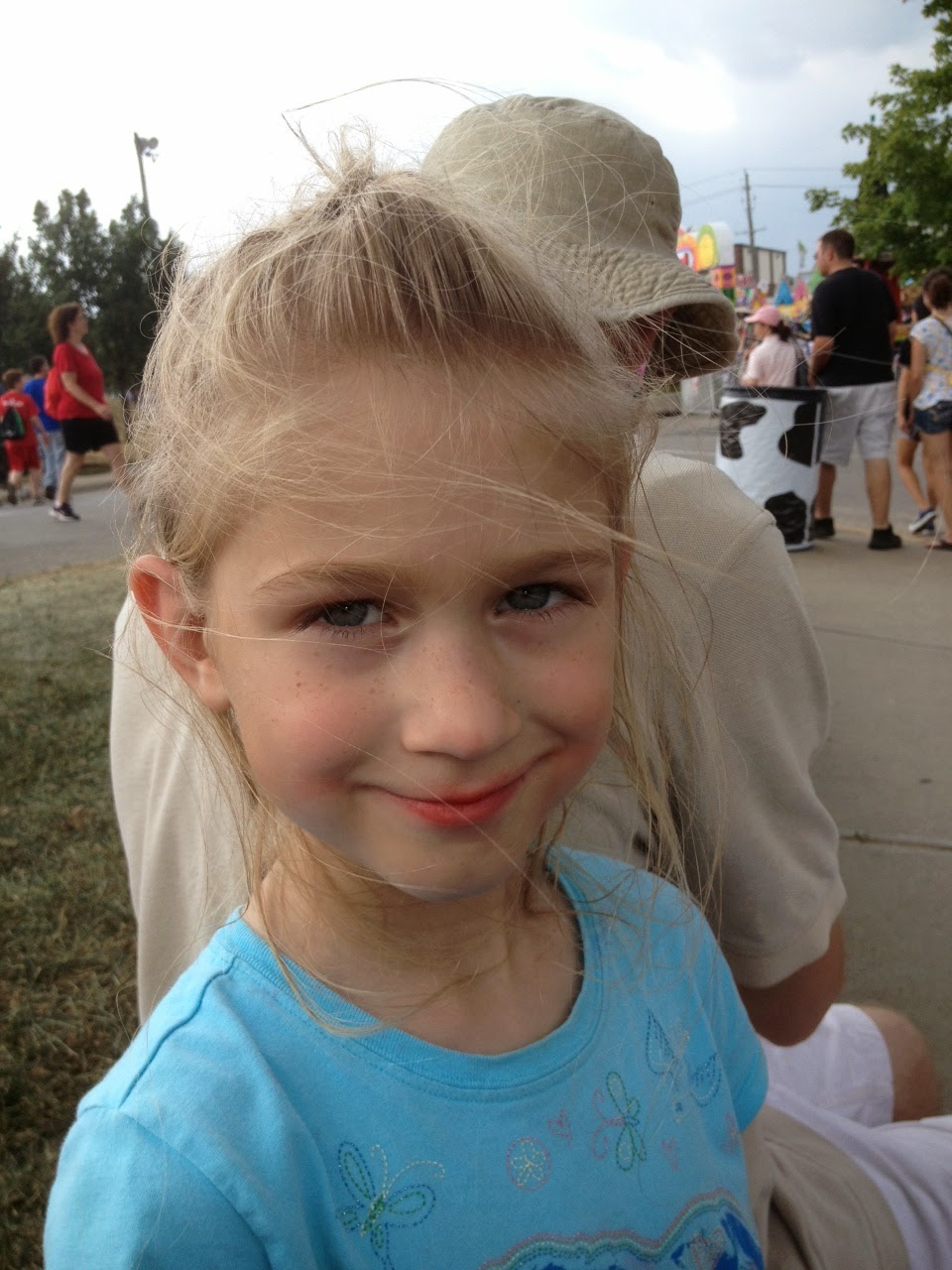 I had a good mom moment today.  It happened at the very end of the day, after Cheetah had been a complete menace to my friends kids at a MOPS craft planning meeting, after my kids had dumped the contents of three book bags all over my relatively clean family room floor, after I threatened to lock one child out if he didn't come in and start his homework instead of throwing sidewalk paint all over the driveway.  I was sitting in bed and I got a text from my friend Deborah telling me to thank Gigi for playing with her daughter on the playground today, that she'd come home from school really happy.  It was a lovely thing to hear and it started like this.  At the end of last school year Deborah, who lives in my ward, moved into a house about nine houses down from mine.  She's on the main street and we are on a culdesac three culdesacs away so it's not like I see her every second, but I see her enough that it makes me happy to have her there.  She has three daughters and her oldest daughter who is the same age Gigi is like a girl version of Captain E...and by that I mean super shy.  For the firs 2 1/2 years she wouldn't even talk to me.  Last December she came to Gigi's birthday party and I think that was the first time I'd really ever heard her voice.  Anyway last year she was still making her mom walk her in to school, but this year her little sister is in Kindergarten and so she is riding the same bus Captain E, Gigi, and Peach ride, although unfortunately neither her nor her little sister share a class with Gigi or Peach.

I've talked to her mom several times about the school year because I feel a little kinship to her, mainly because it's like looking at my own son, and also because I was excited for her that she has Ms. W, Captain E's amazing teacher from last year who was moved down from fourth grade to second.  (I am super disappointed G didn't get her!).  Deborah has told me the year is going pretty good but yesterday she mentioned to me that she wished A could find someone to play with on the playground.  She's the new girl in school this year, she's super shy, she spends her recesses alone.  Deborah said, "A, why don't you go and play with Gigi?"  But A said, "Mom she already has kids from her class to play with."  I'm not going to lie it sort of broke my heart.  That was Captain E the year we moved him to this school.  He was in second grade.  He'd just had to leave the most perfect best friend he will probably ever have in his whole life.  He was so painfully shy.  I don't think he said a whole word unless required that entire year, THE ENTIRE YEAR.

Gigi is a very different creature.  Dr. J and I were randomly discussing her earlier.  She's quiet when she wants to be but doesn't feel anxiety about speaking when she needs to.  She likes being with other people and is pleasant to be around but doesn't feel the need to work super hard to fit into any group.  She plays with others when they do what she likes but if she wants to do something else she has no problem leaving the group to do it.  She's just independent!  I think about it and know that even though maybe sometimes she's a little distant that I don't have to worry about her doing anything that she doesn't want to do.  That doesn't mean she doesn't know how to have fun and I happen to know that she particularly enjoys hanging out on the monkey bars with some of the girls from her class.

This morning while I was eating breakfast, I said, "Gigi have you seen A on the playground?"  She told me yes but said that she's not over in the area by the monkey bars.  "Oh," I said, "well maybe if you walk by her you can ask her if she has any interest in playing on the monkey bars.  She's new at the school this year and she really doesn't know anyone.  Maybe she won't end up wanting to play but sometimes just being invited makes you feel good."  "Yeah," Peach interjects, "I always like when people want to play with me."  Believe me girl we know!  Number three is my Miss Social.  That was it, the last I knew of it until I got Deborah's text tonight.

"Hey Gigi," I said, "Did you happen see A today."  "Yup.  I asked her if she wanted to play on the monkey bars with us and we had so much fun!"  Then she proceeds to give me a whole enthusiastic list of all the things they did today.  To be honest it was one of the few times I've seen Gigi super excited about spending time with anyone, so I think it went well.  It made me happy that she'd taken my push from this morning, and it made me me happy that A and Gigi both had each other to play with.  I hope that they continue to nurture a friendship.  It is an answer to my prayers.  Every morning when I pray with the kids I ask for the same things.  First I ask God that their minds will be open to learning.  Then I ask that they will be a good example and finally I ask that they will be a good friend.  I read this article recently about how if you want your kids to be happy, the most important thing isn't how talented they are, it isn't how smart they are, it isn't how tall or rich or beautiful they are but the biggest determinant of future happiness is how nice they are.  The kids and I had a good discussion about this one day and hypothesized on why we thought this might be.  They thought it might have something to do with the fact that if you are nice to other people that they are more likely to be nice to you, not guaranteed but more likely and if you are surrounded by nice people who wouldn't be happy.  More than anything I want my kids to be happy and so I pray for them daily that they will be a good friend, that they will be loving, that they will want to be kind.  Today I got a glimpse of kindness from one of my children and it blessed her, it blessed A, it blessed Deborah and it blessed me.  I guess you could say it definitely paid off in some happiness.  I feel lucky and grateful I got to hear about this.
Posted by Glenda at 8:51 PM