So We Live in a Compound - Traveling With Kids 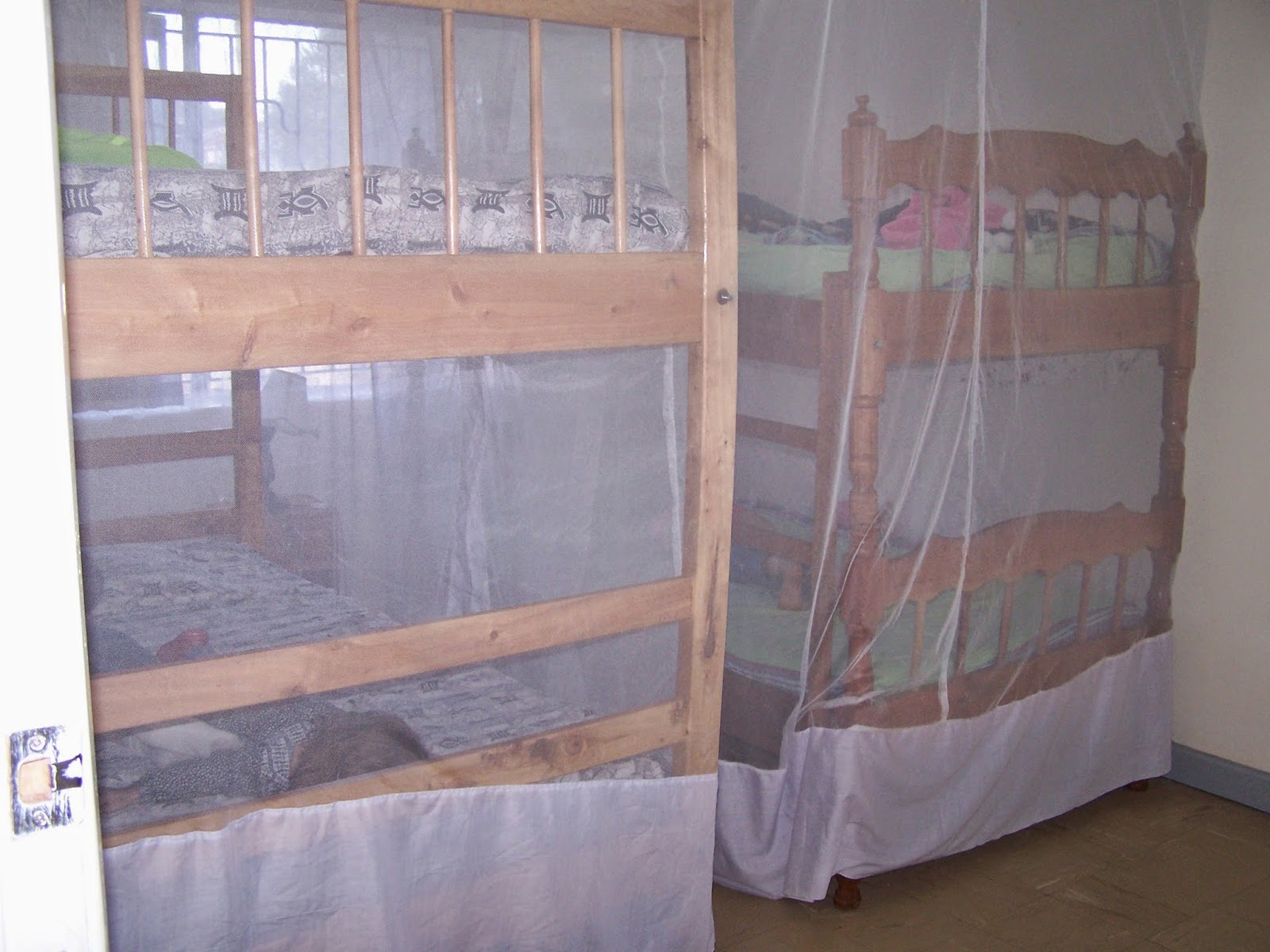 When we first started doing our travel plans we found out that we would need to live in the IU Health Compound.  At first we were a little shocked by this.  The sticker price was rather high and we had to pay upfront before we got here.  We also had this moment where we worried that this would prevent us from really being able to enjoy living out of the US, but it was the rules, live here or in the student hostel which did not have room for us and four kids, so we signed our check and showed up.  I have to say that it has been a lovely development.  We live in a three bedroom house.  We have two rooms and another physician lives in the third.  When we got here towels were set up, toilet paper was available, drinking water was on our night stands, the beds were already covered with mosquito nets.  We have internet...it might be spotty, we might only get it in one room in our house, but we have internet.  International compatible power surge chords were set up for us.  A housekeeper comes five times a week.  She tidies up, cleans our bathrooms, sweeps, and mops our floors and replaces our towels and sheets when they are dirty. We have cooks that make the majority of our meals, breakfast every day, lunch Mon-Fri, dinner Sun-Thur.  At first I worried about this.  Does this sound silly?  You would think I would enjoy the break, but I had figured most of my time would be spent doing what I do at home, shopping, cooking, cleaning.  Now it turns out most of my time is done doing what I'd like to spend doing at home....playing with my children.  We will have to see if the children can stand a whole summer of me.  Living in the compound also had another unexpected gift.  Turns out Kenya is exceptional expensive.  What we original thought was really high rates we now realize we are getting a huge deal.  IU rents out the ten houses on this block, one across the street, and a couple up the street at over a 1000 a piece.  When we go out to eat we easily spend $20 to feed our family.  When we go to the grocery store food is about the equivalent of what we spend in the US sometimes more.  I like to do quick conversions while I'm walking down the aisles.  Bread is 84 shillings or a dollar a loaf.  Cold cereal will run you almost 300 shillings or about $3.50.  Same for peanut butter.  Butter is ridiculously expensive, somewhere over four dollars a container about half of what you'd get in the states and don't get me started on cheese.  I haven't even seen meat available.  You have to go to a butcher to get it and it is not cheap.  About the only thing cheap here is physical labor.  Since 2006 when the unemployment rate was hovering somewhere around 11% it has jumped steeply and now lies well over 40%.  At dinner I heard one of the physicians say that in the region we are in it hovers around 60%, but I have no way to confirm this.  This results in lots of people looking for work and they are willing to do it cheaply.  Since our arrival I've had two of the woman in the compound ask if I'm looking for someone to care for the kids.  There are a couple of other physicians and pharmacist who stay here full time with two year olds and they have nanny/house cleaners.  One is quite friendly and I hang out with her nearly every morning.  Dr. J and I decided we'd probably take one of the girls up on the offer.  I'd like to do some volunteer work once a week and the program takes us out to eat every Wednesday night and it would be nice to have a sitter.  Today I asked Josie how much I should expect to pay for the service.  "Oh," she says, "it depends on the rate you guys work out, but I would think for the four kids for all day you shouldn't pay any more than 500 shillings."  500 shillings people!  That is almost six dollars a day to tend four children all day.  It is insanity.  Have you meet my children.  The idea that anyone would want to watch all four of them for just enough money to buy a jar of peanut butter and a box of cereal is insanity.  It is a major problem in the country.  Imagine you had to live the life you live now with the prices you have now but you were only bringing back less than a tenth of what you bring home now.  They talk about how inflation is just grinding down the people.  At the hospital where Dr. J works they have seen a huge increase in the last few years of suicide attempts.  Many because parents become despondent trying to figure out how they will care for their families.  It is a seriously humbling feeling.  It makes me feel like maybe I should never complain about inflation again. 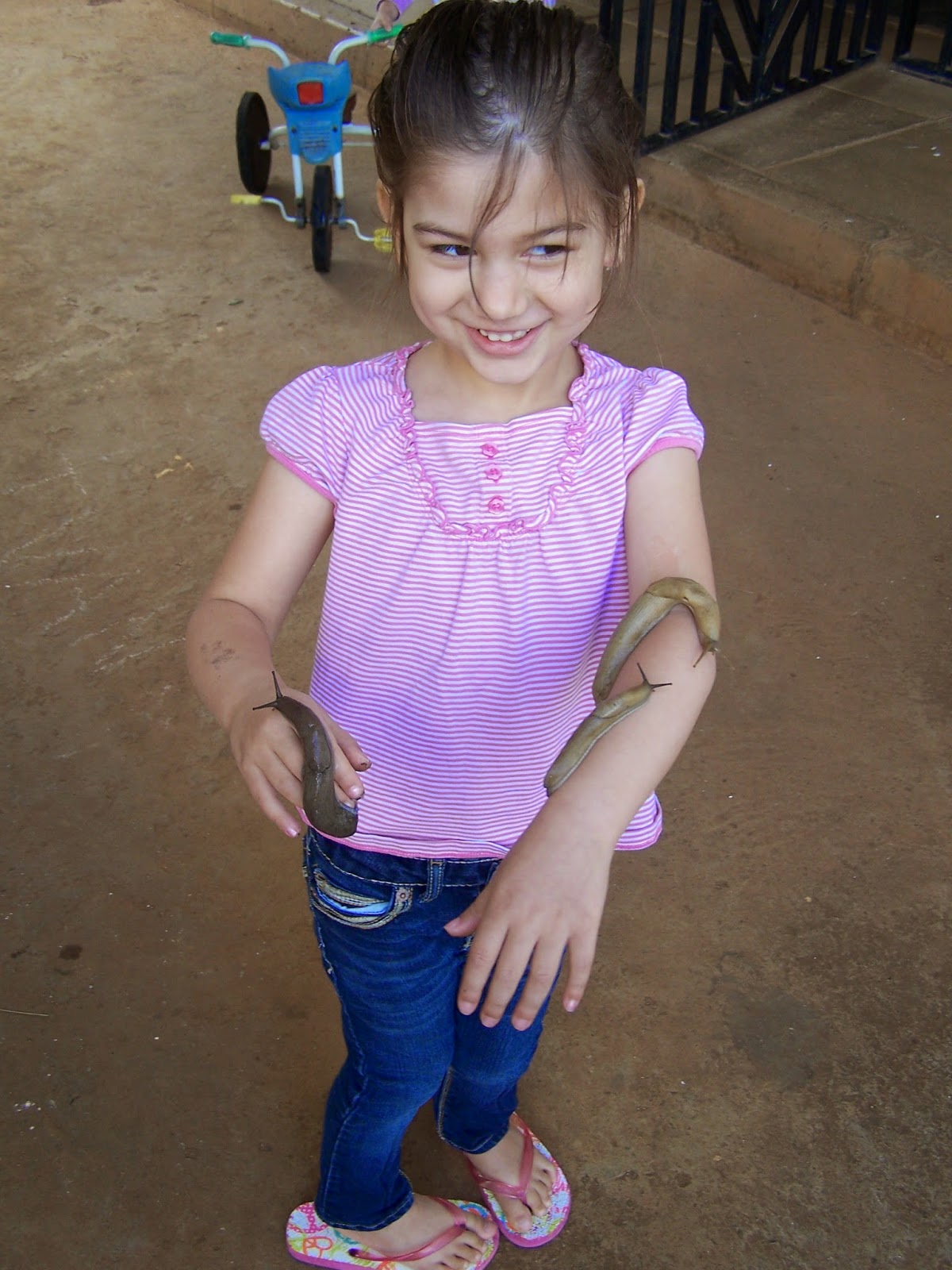 Man after that sort of downer of a start, here is a picture of Peach to cheer you up.  We spend a lot of time outside.  Our neighbors have a two year old son and our kids take full advantage of playing with all of his outside toys.  We also spend a lot of time walking and exploring in our compound, talking with everyone who lives or works here, and looking at new birds, bugs, and lizards.  A cricket that had made it's way into the dining hall today kept Peach and Cheetah entertained for an entire lunch period.  These giant slugs she found also kept her amused.  Who is this child?  I can tell you right now that there is no way I'd be walking around with giant slugs on my arms.  I have some more pictures of the compound I'll probably post some time later this week but for now feast your eyes on the deliciousness down below.  It is a good thing this girl is cute because she is taking advantage of all the nooks and crannies of the place to hide and run away from mom.  So far no great disasters have struck but I also have several people keeping eyes open looking for this streak of pink, or blue, or purple.  The guard down at the first gate Michael adores Cheetah but after he saw her trying to balance on the edge of the canal he told me with all seriousness, "That girl is not going to make it to four." 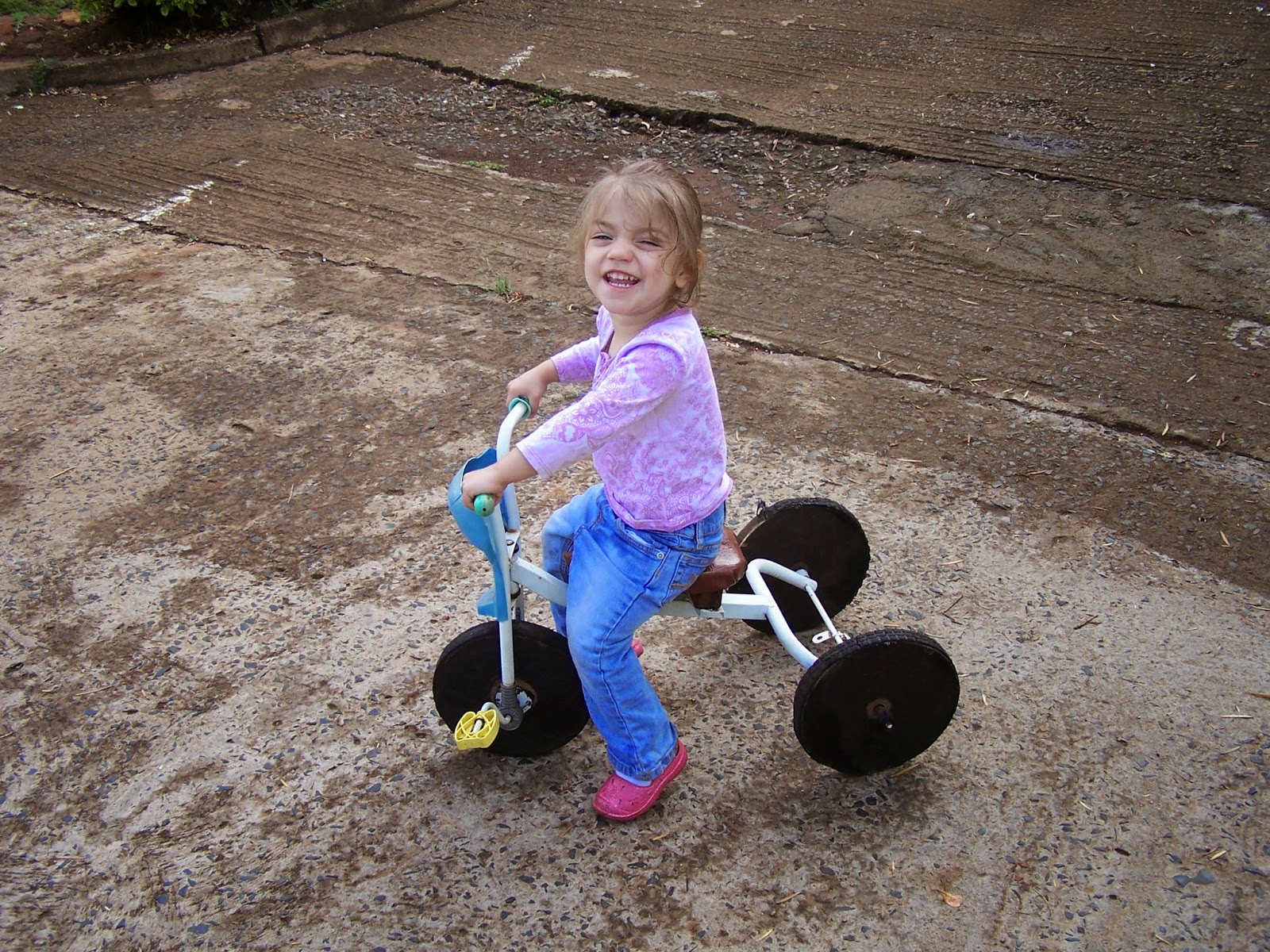