The man who started this program Joe is still living out here.  His house is right across the street from the little block I live on and he has offered my kids and anyone living out here free reign of his yard.  I see him almost everyday at lunch or dinner and he always has a kind word for me.  Today he told Claire, "This lady, this lady here, she is just super, a real supermom."  "Claire, I think what he means to say is I'm super good at being super bad at this parenting thing," I told her later.  "I'm seriously concerned that for years after we leave people are going to be telling stories about that crazy couple with the crazy four kids and that baby who was already running away with no shoes on."  "Yes," she said laughing, "that may happen."  Today I caused quite a stir because it while I originally had Cheetah in pants and a long sleeve shirt (we are in the Monsoon season here and while climate change has kept the rains at bay we are maybe averaging 70-75 degrees daily) she insisted on changing into a sun dress after lunch and was walking around shoe less.  The Kenyans did not approve.  This is a culture where the more clothes on a baby the better.  Josie my nanny friend from next door even said to me, "You need to get some socks on that girl and a sweatshirt or she is going to get a cold."  There is a part of me that laughs at their over bundling and sort of dismisses it as a more traditional belief but there is no part of me that can deny that whatever Kenyans are doing they are making some amazing children.

Talk about some serious feelings of parental inadequacy going on right now.  The last two Sunday's I have been blown away by the Kenyan children in primary with us.  In the states my kids are already not the behaved but here oh my goodness, you could take the best kid in almost any Sunday School class and they would not compare to the group as a whole here.  I taught primary for almost 5 years and let me tell you, every Sunday was a little game.  I came prepared with games, fun, props, treats.  Shoot I still bring treats to my 12-13 year old Sunday School kids.  Here though the lessons are presented in a very straight forward manner, think English boarding school 1950.  The teacher stands at the board with the chalk in hand, reads points from the manual and writes them on the board, and all the kids hurry to write down the point that she's written in seriously some of the most beautiful handwriting I've ever seen.  Then she will ask a question to reiterate the point.  Every hand in the room goes up, a student is called on, answers, the teacher thanks them for their contribution, ask if anyone else has any questions or anything to add, and then moves on to the next point, repeat the whole cycle again.  I was talking to Jill about it, how they do this.  She says they aren't into corporal punishment here but even at a small age parents will set up expectations for kids and give them a look and stern voice if they do not meet them.  I saw exactly what she meant when a few of the kids didn't have their pen for talking notes.  "Children," the primary president said, "Notebooks without pens, this is very ridiculous.  Next week you will all have your notebooks and pens, right?" "Right" all the students responded, and I have no doubt very few of them will forget.  Meanwhile I was recently thinking about adding notebooks to my 12-13 year old class but thought, "Ah, then I'll have to haul them back and forth every week because I just can't expect them to remember them."  Well maybe I can and maybe I should.

Last weekend we joined a cardiologist and his family at the one 5 star hotel in town for brunch and swimming.  He'd heard we had four kids, he has four kids, so he came over a few days ago to check us out, then called around the next day to get Dr. J's phone number, and invited us to hang out.  They are a seriously great couple and are doing what Dr. J and I hope to do someday with our lives, working half the year in the states and then half the year out of the country.  The guys seemed to really enjoying talking medicine, the kids had fun playing in the pool and jumping in the bounce house, and Celeste and I had a great talk while watching the kids at the pool.  We had a good laugh about the different parenting styles on display.  The Kenyan parents were very close at hand, gently redirecting their kids away from anything they thought might be dangerous, messy, or disruptive.  We the American parents were also sitting pool side, but we were a further distance from our kids and tried to only intervene when absolutely necessary, like Cheetah's million attempts to leave the baby pool for the super deep, super slippery adult pool.  Then their were the European parents.  They were sitting very far away under an umbrella table and even when their son who had to be somewhere around Cheetah's age came to play in the baby pool they didn't really ever seem to look over our way until they were ready to go.  It was just interesting to see how different each culture dealt with the same situation. I wish that I could take all the best part of each culture and somehow meld them into the best parenting experience for my kids.  WHY CAN'T I BE AMAZING LIKE THAT!  WHY CAN'T I!!!! 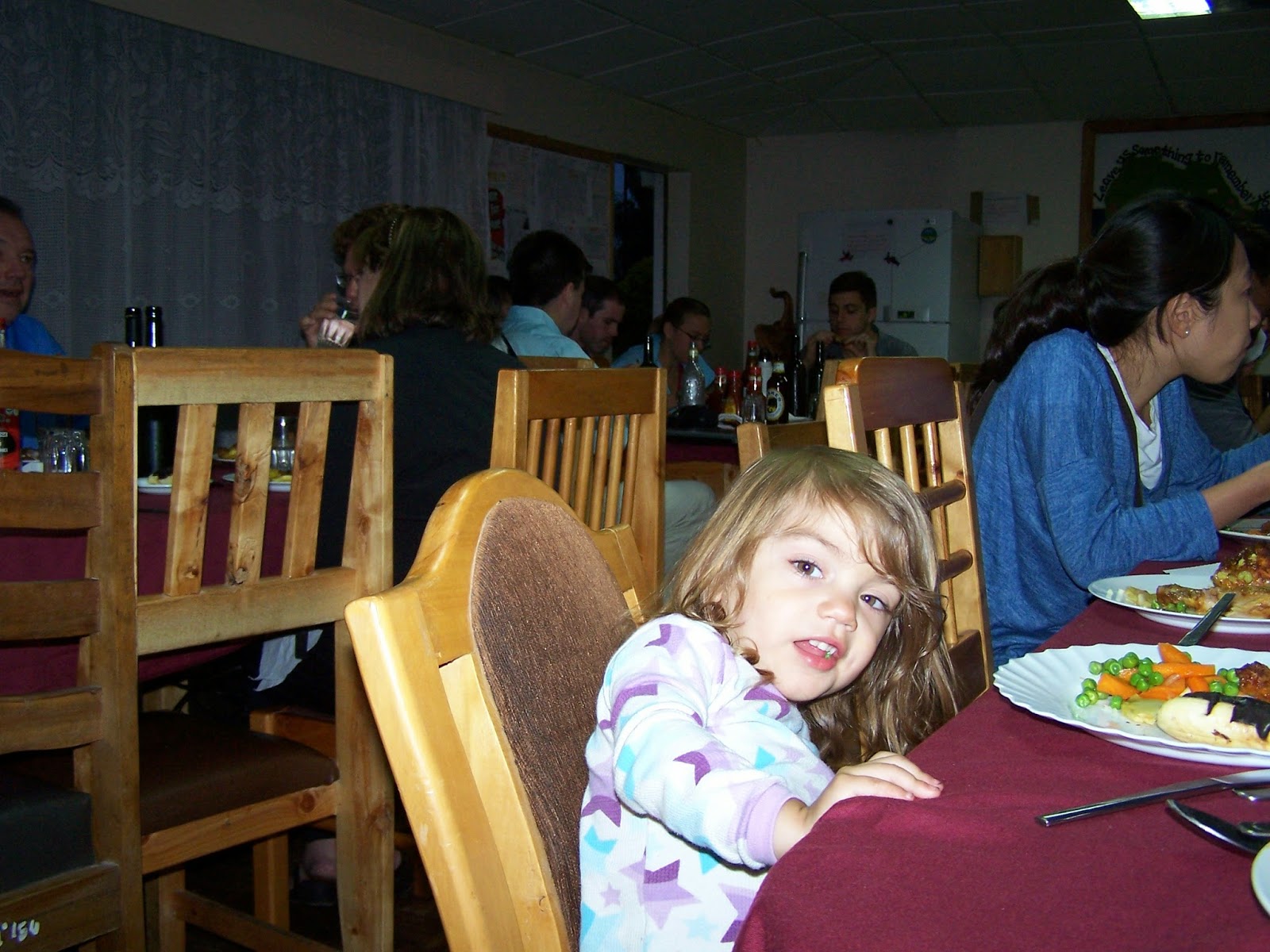 Anyway just in case anyone cares I did eventually get Cheetah out of that sundress and into a pair of long sleeved pajamas.  She has been falling asleep every night mid dinner and Dr. J and I finally decided it would just make our lives easier to take her over in pj's so we could just slip her into bed when we get home.  Our dinners have got a lot more busy.  When we first got here there were probably only ten other visiting physicians or so at the compound rounding out the more permanent staff.  Today ten dental students showed up with a couple of dental professors.  So far we've had a pretty tight knit group here and it was hard for me not to want to automatically see them as intruders but while trying to stay positive I did notice a few first day differences that we will have to see if the next few weeks change my mind about.

First off dental students are so young, I mean really, really young.  Most of the residents here are in their last year of residency, so they have at least three or four, or more years on the oldest dental student.  Shoot even most of the medical students here are older.  It seems like there is a certain type of person attracted to this type of work, and it is the type that maybe teaches for a few years, spends some time out of the country, moves through a couple of jobs and then finds their true passion in medicine. These dental babies almost seem to be on some great two week adventure, while everyone else seems to be in the mist of a life mission.  These are obviously generalizations based on very few interactions and I do have to say that the dental group leader is quite an interesting person.  She came up to me earlier in the day and told me about raising four kids in Tanzania, so there is definite passion there about serving in undeserved areas but from the students I haven't quite felt it yet, and being around the people here can be really intense.  Did I tell you about the high school senior who was here after writing a grant and fundraising to get money to work with street kids.  Like I said, life missions.  Finally I just found they way they sat at meals to be really interesting.  On the dental side you had all the students at one table and all the faculty and their spouses at another.  It is the opposite on the med side.  When the doctors come into dinner they all bunch together, often finding a spot closest to the most senior physician and mixing specialties. It doesn't take long for them to start bringing up patients.  "Today on the ward I saw this?  Have you ever seen this?  What do you think of this treatment?  I used this as an alternative?  What do you think of that?"  It is one of the great things I've observed here, even in their spare time they are always collaborating, always bouncing ideas off each other, always trying to see if there is something they missed, something they can do better, something else they should try.  I love being able to witness the melding of hearts and minds.  I just wish I could contribute in some way.
Posted by Glenda at 12:44 PM