Eldoret, Kenya to Krugar Farms
Time: 25-30 minute tax ride
Cost: 2000 Kenyan Shillings for the ride, 500 shillings per adult to get into the park, this included the guided hike.  Kids under eighteen free. 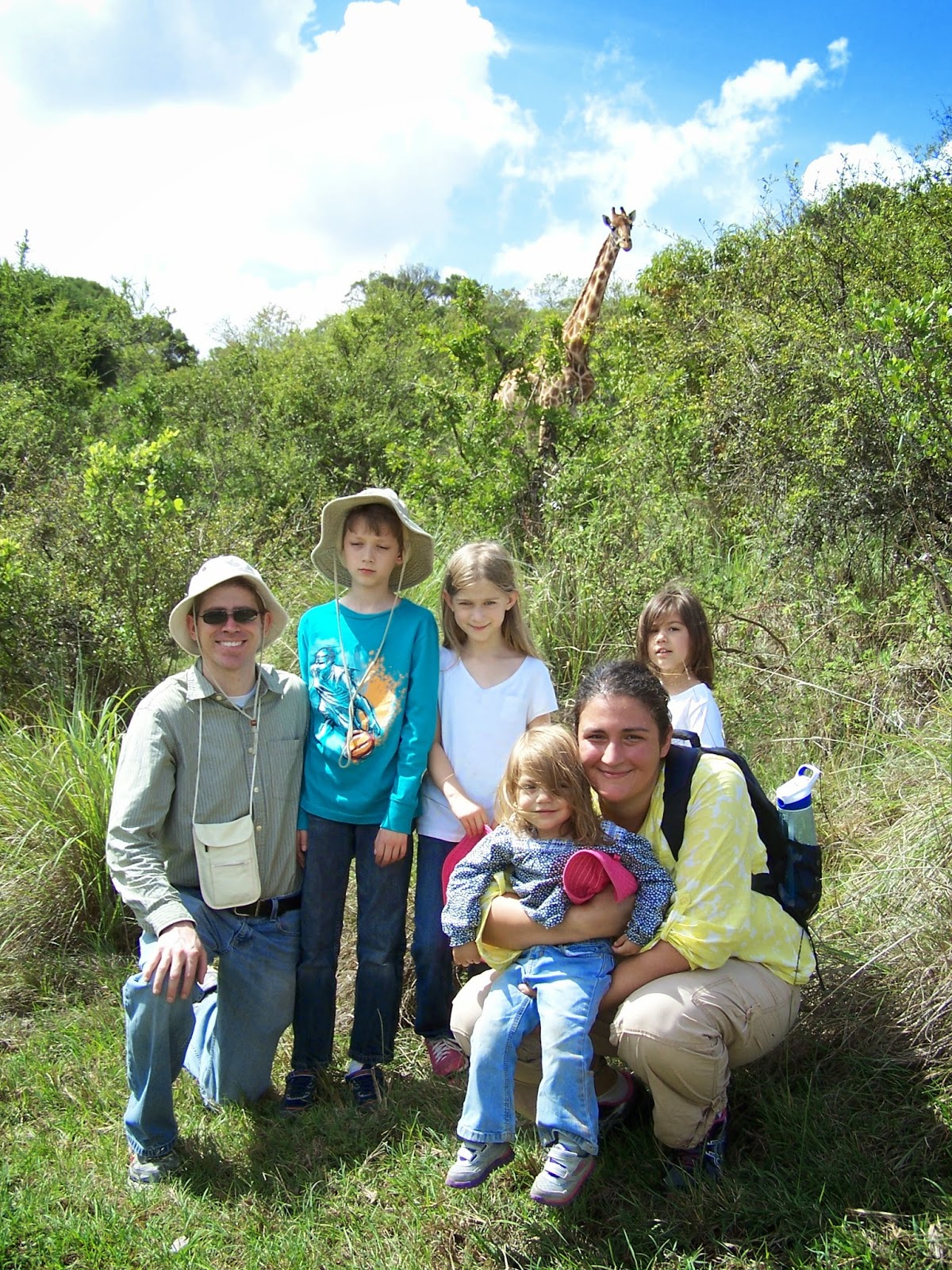 Last Sunday some friends asked if we wanted to tag along for a hike with giraffes.  We were like, why the heck not so we left an hour early to be at our compound gate sharply at noon.  I'll have you know that Captain E complained bitterly about this.  "We are leaving church early to go see giraffes?"  "Yes, sweetie."  "We've seen giraffes a million times.  This seriously seems excessive."  Regardless we headed off on our way.  While we were in the taxi we mentioned to the driver that we'd had a lot of trouble earlier that morning finding the LDS church (oh and by the way that taxi ride cost us $12...one of the most expensive we've had in country if you don't count traveling from the airport a half hour which only cost us 2 more dollars).  He said, "oh no problem and drove us past not one, but two more LDS chapels.  I'm not sure if we will trade churches.  The first one he showed us was definitely closer meaning the taxi ride would probably be cheaper but it goes through downtown which is crazy...the potholes rival any I've ever seen anywhere...that includes Indianapolis this winter, it is two lanes only, there are no traffic lights, signs, and while there are a few places where a shoulder or sidewalk are present they are often filled with vendors and the occasional bus van or motorcycle taxi trying to get around traffic.  Speaking of motorcycle taxis, yesterday I was walking in the compound with three of the kids and one stopped asking if I needed a ride anywhere.  I laughed and told him we were already home.  He said no problem and drove off.  Later I asked Josie about it.  "Oh," she says, "I've seen families of four on one, driver, mother, father, two kids."  So there you go.  Perfectly reasonable right.

Anyway back to the hike.  We took a half hour taxi ride that took us through the city, out into the country, and finally down a long dirt road skirting a small mountain top on one side and corn fields on the other.  We were in one taxi, four friends were in other.  When we got to the gates of the "Giraffe farm" as everyone here calls it we were stopped by two rangers as one of them knocked something out of a tree and then seriously jumped about ten feet back in one leap.  "What were they knocking out of the tree?" Dr. J asked our driver.  A quick conversation of Swahili, "Green snake," the driver replies.  "Green snake like green mamba?" Dr. J ask.  "Yes," the driver responds, "but no worries I've lived here my whole life and I've never seen one."  A statement that is much more comforting in the city then it is in the nature preserve where we just saw the guy knock a snake out of the tree.  You should know that this was my biggest fear about Kenya but I have to stay once we started hiking I completely forgot that snake or any brothers or sisters that might have been lurking in the bushes.

It was definitely difficult, not so much the hike itself but the fact that we were seriously struggling with altitude sickness, hello huffing and puffing.  Someone tell me why I've been going to the gym for the last seven years because I'm seriously so out of shape.  Also Peach and Cheetah.  Cheetah just need to be restrained.  Peach seriously started to complain about 400 feet into the hike.  We tried to switch off who was carrying her or getting her to walk for parts of it but it was not fun when she was walking.  Gigi also fell into a honey badger hole, which was just nuts.  Right in the middle of the trail was this giant hole and I remember thinking as I passed it, I should call out a warning, but I didn't.  Next thing I knew Gigi had one leg in, one leg out and was in tears.  I mean the thing was seriously so deep.  Luckily we had a friend Nathaniel with us and he carried her for half a mile until she was happy again.  All she has left is a giant bruise now for her troubles.  Before we found giraffes we saw giraffe poop, giraffe footprints, porcupine quills, impala poops, and impala tracks.  We knew eventually we'd see something.  Our first giraffe encounter was pretty far off but as we honed in on one on the hillside our guide took us much closer.  We spent quit a bit of time photographing ourselves in front of this lovely guy, feeling really great that we got to see him so close.  When we finally left I thought, "Man what a fun experience.  Then we looked out and saw a huge group of impalas running across a field far below us.  "Neat."  At this point I was totally happy with our hike and even though we were now moving through some pretty prickly underbrush I thought it was worth our siting.  Truth be told I didn't even think of Mambas, except once when I thought, "Man, it's so weird I'm not freaked out about mambas."  I was just that happy.  They we came around a corner and there were seven giraffes just eating leaves on a hillside, including some babies and juveniles.  It was a great feeling to watch them.  Even though you maybe couldn't get as close as you would have at a traditional zoo there was something about just being on the same setting, walking in their footsteps, knowing that they could move and travel very freely in this park that was just awesome.  I've gotten to the point at the zoo where I'm just not sure how I feel anymore.  I watch the animals pace around in these tiny enclosures and I think, "Are they happy?"  They have food and they are free from predators?  Is that all they need?  It is hard for me to know but I definitely think that when animals are given the opportunity to stay in their family groups and to roam where they safely can it probably adds something to their lives.  It was a great experience!  I felt really lucky to have the opportunity to be out there enjoying nature with these beautiful bizarre animals and was super thankful to the ladies in our group who organized the expedition and invited us along!