Flashback to my premature baby 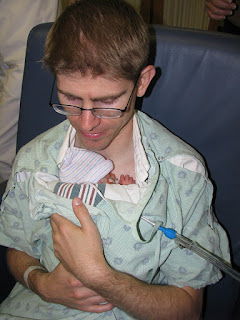 Cheetah's birth was still the hardest thing I've ever gone through, so I shouldn't have been shocked when last month during that birth survey I started crying talking about it.  I now have a vibrant, enchanting 6 year old but that it hard to imagine when you are on bed rest, with ruptured membranes at 27 weeks.  I knew early on there was a very good chance she would survive.  I was in the hospital long enough to get steriods and babies born post 27 weeks have like an 80% survival rate, by the time she was born at 29 weeks it was 90%.  She was still born though with a collapsed lung and need surfactant and cpap to get her going.  Had she been born in Eldoret Kenya where we took her two years later she may not have made it.  We were lucky she was born in the time and place she was.  Earlier when I was thinking about it I was tempted to say blessed but if you believe in a God and believe he loves all of his children it almost seems cruel to me to claim that as a blessing while it is still an opportunity lacked by many.

Years later when I was pregnant with Mr Squish my pregnancy was more closely monitored.  It felt like an intrusion almost but it was also great luck to have people who cared so much and the technology to keep that pregnancy healthy.
Posted by Glenda at 4:04 AM