I managed to get six books read this month.  I figured I didn't want to be playing catchup from the beginning.  There were:


Is Everyone Hanging Out Without Me? - Mindy Kaling

So I should preface this by saying I loved the Office, like it is one of my top five favorite shows of all time, and Mindy Kaling was a writer for the office.  She also is the star of the Mindy Show...which I do not love quit as much as The Office because lets face it, a smart woman like that would not get tied down to so many horrible boyfriends but I recognize it is for comedy and so I keep watching.  Plus it gives you great tidbits like this which while I realize is maybe a little scandalous is also one of the hottest kisses I've ever seen...TV, movies, really life...pretty much ever.  Plus I really wanted these two to kiss so I was HAPPY!  Ok so basically what I'm saying is I have a little bias because I really like Mindy.  She just seems cool and funny and like the kind of person who would make your friend group just that much greater.  I sort of have the same feeling about Tina Fey and Amy Poehler.  A lot of guy comedians who I think are funny just feel like they would be a lot of work to be around but these three ladies they just seem like they could be everyone's funny best friend.  This book did nothing to change that belief for me.  So the order was a little loose (maybe some of the essay's needed a little more fleshing out or could have been pulled completely), it had a few awkwardly placed f-bombs, and it wasn't so funny I was dying while I read it, but I was smiling almost the entire time and a few times at the gym I just laughed out loud like a hyenna...so it was totally worth it.  I was looking for something to make me laugh because laughing makes me happy and this fit the bill.  Also anyone know how I can become besties with Tina, Amy, and Mindy and just do lunch!

My father-in-law gave me access to his HBO and I pretty much just use it to watch movies I'm too cheap to rent from the red box.  A couple months ago while Dr. J was working a night shift I choose Beautiful Creature which is the prequel to this book.  It was not bad.  Definitly The Hunger Games but good enough I was willing to try the book.  I figured it had to be at least as good as Divergent, hopefully better.  So I grabbed this second book at the library.  Big mistake!  It became pretty obvious midway through that the movie people had not stayed nearly as close to the book script as I'd have needed them to to stay comfortable with jumping in on the second book.  Also this book totally feels like a missed opportunity for me.  Two woman are writing from the guys perspective...hmmm???  How about your write from the guy and the girl, or better yet how about you just write from the girl, because guess who the truly interesting character is.  THE GIRL!  So really we are just watching her life kind of implode from the perspective of her sort of annoying dependable boyfriend.  I don't know, it just wasn't for me.  I especially did not appreciate that they threw in new potential love interest for the characters but then of course they ended up together again and the same thing you thought was a deciding factor in the first book, "Will she turn good or evil, oh wait she can be both."  Well you pretty much just have the same story here with the same conclusion and then they want you to pick up the third book.  Blah, no thanks! So I saw this book at Target and I was so intrigued by the idea of it that I remember the title and found it again at the library.  It's sort of a fantasy with these weird creatures seeking out and trying to destroy magical children who are hiding out in a time loop during The Second World War.  One of the children decides he can't handle hiding and leaves the protection of the loop to join the Army.  He fights in the war and then moves to America where he raises two children and then has a grandson who he tells about his life and his "magical family" but they choose to believe he is just speaking in a metaphor for The Holocaust.  Then he is discovered and killed and his grandson goes on a trip to see if these stories are really true.  The interesting part of this book is actually the part that got tedious for me by the end.  The author has a collection of weird older photos that he has woven the story around and while at first it is fun look at the old photos and what constituted early trick photography.  After awhile it just feels a little too contrived, like I would have preferred the story if he didn't have to keep making up these little bits to explain the photos he choose.  It was ok but not enough that I'm going to read the sequel. 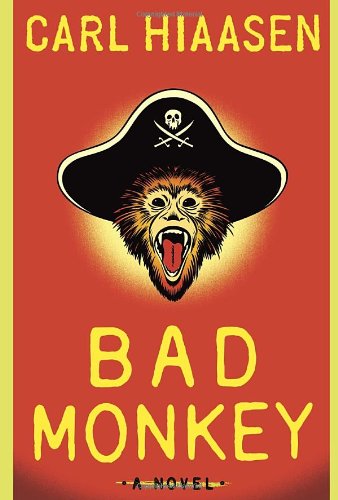 So I've read some of Carl Hiaasen's work before.  He's actually the guy who wrote Hoot just in case you care.  He mainly sticks to mystery-suspense with an environmental angle.  This book stayed pretty true to that but it just stunk.  I wish I would have picked something else. So Dr. J and I have a tendency to binge watch shows.  We don't have regular TV so there is no show we have to watch but when we do want to watch TV we pick one show on Netflix and pretty much stick with just watching that one until we've finished all the seasons.  Right now we are watching Supernatural (Dr. J's choice).  It is totally cheesy, the plot lines ridiculous, the acting overdone and horrible, and worst of all the story is just suppose to be scary, not my type of show at all but over eight seasons the dang thing has really grown on me.  Dr. J and I will repeat particularly cheesy lines to each other and then just laugh our heads off.  So I guess you can say it has been a great bonding experience.  When I picked up The Arrivals it starts with a scene where a Monk is taken over by a demon and after weeks of watching Supernatural I was like jackpot!  Unfortunately it just didn't pay off for me.  All the characters who were suppose to end up together did.  The magic didn't really make sense.  I didn't really care about the bad guys either way and didn't find the good guys all that likable.  Someone find me a book I will like!

This was my favorite book in the group.  I mean it won a Newberry for crying out loud you know it is going to be good.  Basically it is just one long summer where a little girl gets to find out about what makes her dad tick after he's sent her away to live with friends while he works on the railroad during depression times.  There is not a whole lot more to say about it, but I really did love this book.