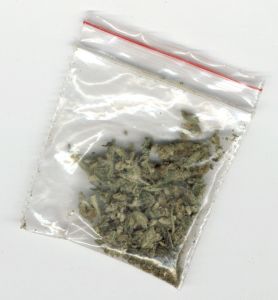 One time I had a sandwich bag of weed in my desk, a full sandwich bag, which thanks to google I now know was probably about 1.5 ounces too much.  I hope it is obvious about me that drugs just were never my thing.  While cleaning out a box at my mother-in-law's house I recently found a bottle full of about 20 Percocet and a handful of muscle relaxer.  I'd gotten them for some procedure about eleven years ago, figured out I couldn't stay awake on them and promptly forgot them.  More recently when I had my appendix out I definitely enjoyed the relief of my hospital morphine drip (I blame some of this pain on surgery while having a full out upper respiratory flu and being forced to wean my daughter in a day), but once I got home I had to take myself off the Valium because I was hallucinating.  I called up my doctor and the  conversation went like this.  Me, "So I'm taking my Valium and I'm having a problem."  Nurse, "Describe your problem."  Me, "Well there is this fuzzy, dark creature and he keeps trying to climb up the edge of my bed every time I look away."  Nurse, "Stop taking the drugs immediately!"  Obviously, I'm a drug novice.  As for illicit drugs, I was at a concert one time and a guy offered me a tote on his joint.  Where was it, Dave Matthew's, Cake, 8stops7, Third Eye Blind, Creed?  The truth is I honestly can't remember.  I smelled pot at every one of those concerts so your guess is as good as mine.  As for the invitation I politely declined.  But the point of this confessional is that one day I had a full sandwich bag of weed in my desk.  I was in eight grade and this slimy little punk at my school Juan heard that there was a drug enforcement office on campus, so he slipped his stash, (which I'm assuming was for sale...I mean who needs a whole bag to smoke at school) into my desk.  The details on how this arrangement occurred are a little fuzzy.  Did he ask me politely if he could?  Did I hold the bag and put it in my desk myself?  Was I even aware of it, before third period?  Like I said, fuzzy.  What I do remember for sure is he kind of creeped me out.  Just a year before he been a pretty nice kid.  He was short for his age, like most Hispanic guys I knew, had a soft baby face, and while occasionally the class clown for the most part, he stayed out of trouble.  Something happened over the summer though and when he reappeared he sort of scared me.  He was still short, but he had the start of a mexi stash, slicked his hair back, always dressed vato, and suddenly only spoke when he was cursing people out. My guess is he put the weed in my desk, and I acquiesced because I was freaked.  So there it sat in my desk, from third period until lunch.  Then I grew a spine, or maybe I just saw something I feared more, and that happened to be cops searching kids.  So when I got back from lunch I grabbed the big baggie of weed and I shoved it back at Juan and told him to find somewhere else to hide his stash, and then I quickly turned away because the last thing I wanted was to face him down.  I think about that day every so often.  Why didn't I tell him no from the very beginning?  Why didn't I rat him out to the teacher or the cop?  Did the presence of the cops really embolden me enough to action?  And I wonder about what it means for my own kids as far as the stupidity of youth, peer pressure, surviving junior high and high school, because the truth is I was a pretty good kid, drugs freaked me out, and I never got into any trouble, but had the cops brought drug sniffing dogs with them that day I would have found myself in a world of hurt and mainly it was because I was 13 and just didn't know how to deal with an adult situation.  Someday my kids are going to be 13.  Will they be like me, scared, a passive participant, or will they have more gumption then me and kick the crap out of that kid?
Posted by Glenda at 2:51 PM