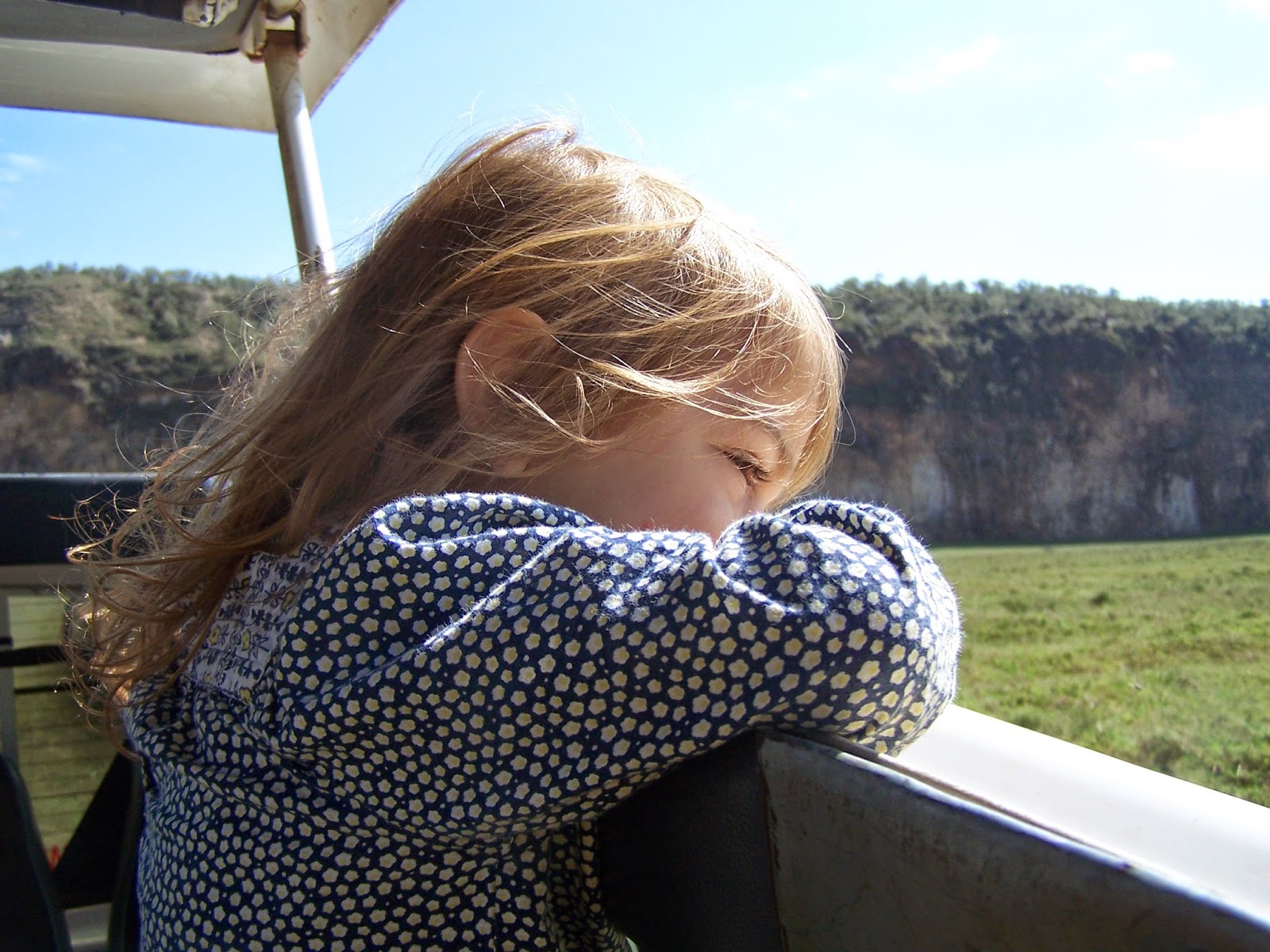 I get asked this seriously ALL THE TIME.  To be honest I'm not entirely sure if it is a compliment.  I mean maybe they are just wondering why I don't throttle my active children into submission.  Living in a "compound" of adults with four children can sometimes be a chore.  The kids are often all over, running, screaming, squealing, climbing, hanging, messing about.  We meet for meals three times a day with the other residents of the compound and it is at these moments that it is impossible not to be aware of my children and the whole Swiss Family Robinson vibe they bring to the whole experience.  First off they rarely have shoes on.  For whatever reason Peach has decided that shoes are meal time optional and will kick them off as soon as she sits at our table.  Cheetah is usually just without shoes.  Then there is always a little bit of jostling in line while they wait for me to serve up their plates, Captain E trying to avoid eating anything, Gigi asking for more meat, Peach twirling circles and asking if there is a desert today.  Then SarahEllen and Joe walk in and my two youngest go nuts.  "There is SarahEllen," they yell from across the room while standing on chairs and aggressively pointing with both hands.  "Mom, mom, look, there is SarahEllen."  It is usually at this point that Cheetah will start naming off all the people she recognizes in the room.  "Aubrie, beautiful (but only if she is wearing a skirt), Michael, JJ car (this what she insists on calling him since we walk by and label his car every day probably twenty-five times), Wyatt, Meredith, Daddy Archer, Mommy Archer"  "Girls can you please eat!"  At this point they pick at two things and then Gigi and Captain E start pushing each other.  Cheetah gets out of her chair and runs for one of the three doors leading out of the dinning hall.  I stand up and start to chase her but then she bee lines over for Joe and will place her little head right by his side.  "Isn't she just the most marvelous thing you ever saw," he will tell me as he gently pats her head.  "Just all light and love, not a bad bone in her body."  But I know the truth that the second I look up to agree with him she is going to make a break for the door and that will be the end of my sitting lunch.  (I'm not entirely sure she isn't training to be a criminal mastermind) From that moment on I usually just have a standing lunch.  I bounce Cheetah on my hip while she screams and begs to be allowed outside and I try to shove whatever was left on my plate into my mouth.  Then I beg her to eat a few more bites.  We recycle everything we can here and that includes leftover food which is composted so I know I will have to walk by the kitchen staff and dump her plate in the kitchen scrap bucket and it just makes me sick when the thing is covered in food, because guess what, WE ARE IN AFRICA and THERE ARE STARVING KIDS HERE.  Is it too much to ask that you just finish your quarter of a baked potato and your piece of cake?  IS IT?  Plus the kitchen staff work hard and I don't want them to take my kids refusal to eat as any kind of critique on their cooking.  These kids are crazy.  I mean we are talking about people who when I make homemade mac and cheese say, "but I only like the Kraft kind!"  Seriously people who is raising these kids?

Sometimes I can tell that my kids annoy people.  It must be exceptional difficult to come to "Summer Camp for Weird Adults" (a term of endearment someone who shall remain nameless gave this place) and find it to be populated with children.  I mean this is a place to come and discuss medical problems and global health issues and drink a beer while watching soccer and instead  you are faced with what looks like a nursery school play yard.  Thankful most people are pretty nice about it and while we did have the super rude "Whose kids are these?" comment (It doesn't sound so bad but if you'd had seen the snarl that accompanied it you'd know why I'm still grouchy about it) it is mostly balanced out by people who go out of their way to chat up my children.

Today I had a good laugh when I rounded the corner and saw one of the first year medical students kind of cuddled up next to a girl under a tree.  "Who is Wyatt cuddling with?" I wondered as I took a few more steps forward and than I realized it was my daughter, Peach, who I'd sent home to get her father for dinner.  Apparently she never made it past his sphere because as soon as she saw him under that tree she made a beeline for him and he was entertaining her with a caterpillar he found.  This is the second time I've found her hanging on every word of a young twenty student professional under that tree.  Last week she was curled up next to a dental student in a hammock.  At one point he had both Cheetah and Peach in the hammock with him and all you could hear was peals of laughter.  "Girls," he says, "why can't I get girls my own age to laugh at all my jokes the way you two do?"  Today I said to Wyatt, "I'm really starting to get concerned with this girl.  The way I see it, it's going to go one of two ways, either she's going to bring a guy home who is twenty years older than she is or she is going to only date 23 year olds her whole life."

But how do I always look so calm, that is the question?  Well first off it is sort of a ridiculous question because this is not real life.  I'm living in a fish bowl and you had better bet that the stakes are high when you are surrounded by 30 extra adults to not lose your cool in front of them.  Secondly, I realize that I'm not the only person who has ever done this.  Tomorrow we're going over to hang out with Celeste, the Duke Cardiologist's wife.  She has four kids as well and for the last six years she's been spending six months in NC, six months in Kenya, rinse and repeat.  That lady is a trouper, an amazing example to what a willing spirit can do.  I read the blogs of Bridget who I've been watching troupe all over the world with her kids for years and Nancy who lived in Egypt for two years with her two oldest.  I have the example of Joe and Bob's wives who took kids all over the world into conditions much harder than these.  Finally, I have four kids and I've been a mom for over ten years.  I'm not saying this gig is always easy or even pleasant, but at this point I'm kind of used to the commotion and I can kind of just work through it.  Today I was talking with a mom of one child who is the same age Cheetah would have been had she been born at term (2 1/2) and she was watching me bounce a screaming Cheetah in a football hold.  "How are you able to just stay calm through this?" she asked me.  "Experience," I told her.  "I know I just have to wait until 3 1/2 for this to end (wink, wink) and then I'll be home free with this one until about 9."  Maybe I'm better at this job then I thought I was :)
Posted by Glenda at 2:46 PM