Critters - Traveling with Kids in Kenya 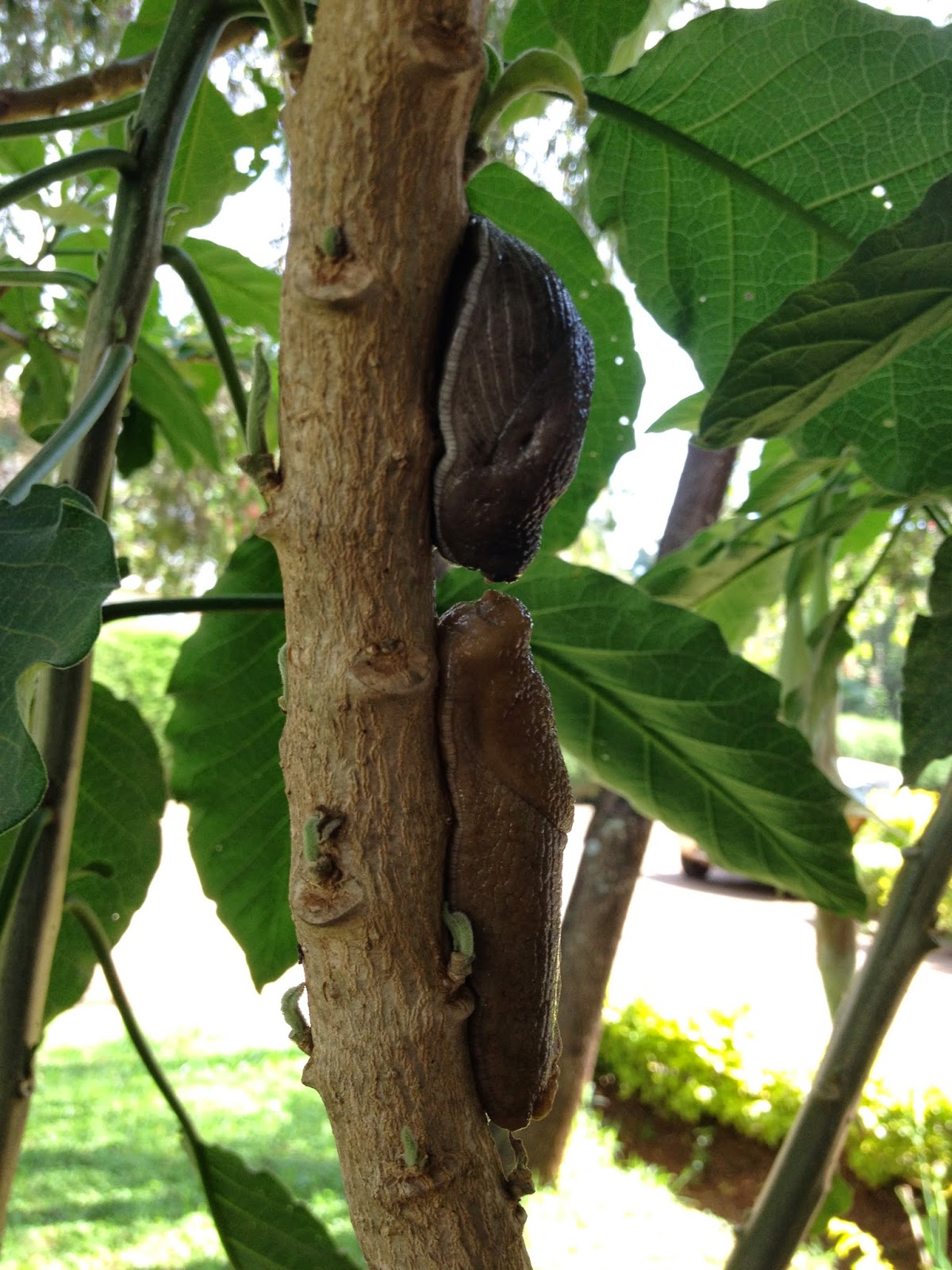 When the Bible describes the garden of Eden I can only imagine it would look something like Kenya.  Tyler our neighbor describes this as "planet heaven, where plants go after they are killed as house plants in the US".  Did you know that poinsettas grew up to be trees or that begonias could be a bush?  Well I had no idea because in the US they are just seasonal plants and never get larger than a small pot.  Our house and yard are also full of critters.  Every time it rains these gigantic slugs come out to play.  They are huge...I seriously have never seen slugs this big.  Peach loves them.  She doesn't pick them up anymore because their slime is so hard to get off but she still loves finding them, pointing them out, and touching their eye stalks.  Who is this child and how did she get so brave? 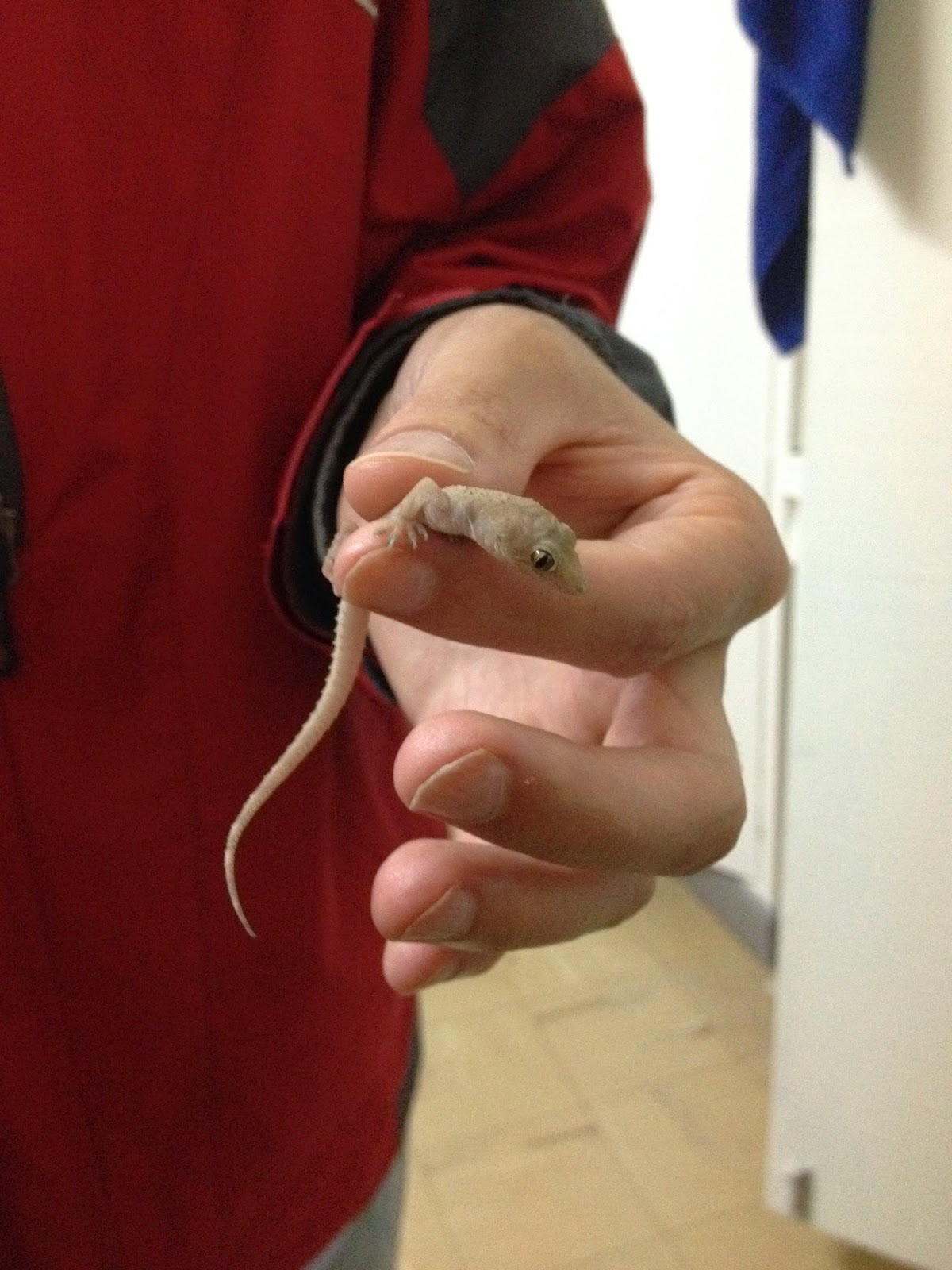 Last week the kids found a tiny lizard outside their window.  It was almost white and they spent two nights watching how he used the light from the window that was attracting bugs to catch his dinner.  The third day they actually found him in the room.  All the kids were screaming for dad to come.  They've been begging him to catch them a lizard for weeks.  There are some seriously huge reptiles running around our compound.  There are these metallic greenish blue one that are over a foot long.  There are lots of brown striped lizards.  Dr. J has chased a few but this is the first one inside he's been asked to wrangle.  He easily caught it and then asked the kids if anyone else wanted to hold it.  Does it come as any surprise to anyone else that there was only one taker on that challenge. 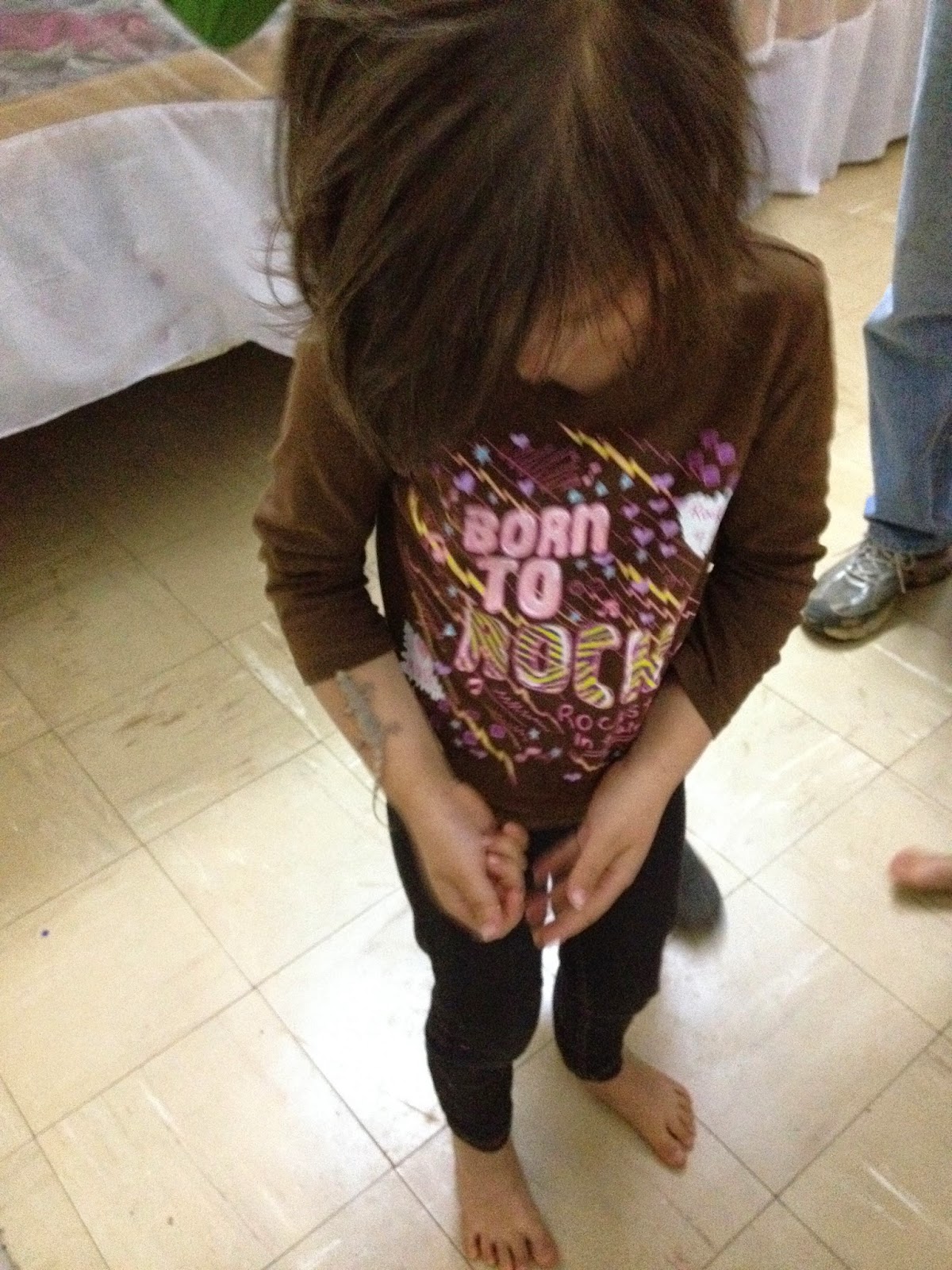 Peach grabbed it and was doing pretty well holding it until her brother said, "Loosen up a little or you are going to make him drop his tail."  Well that was just what he needed to get away.  He slipped from her fingers and ran up her arm.  She freaked a little at that moment and started waving it around.  The lizard flew through the air, hit the mosquito net, fell to the ground and scurried away.  At this point Peach started to cry.  Her brother and sister had started to yell at her for losing the lizard and I think she was a little freaked out about the fact that he was suddenly under her bed.  Both Dr. J and I gave her a hug and told her it was ok.  Then we told the hecklers who were both not brave enough to even touch the lizard while dad was holding it to hush it. 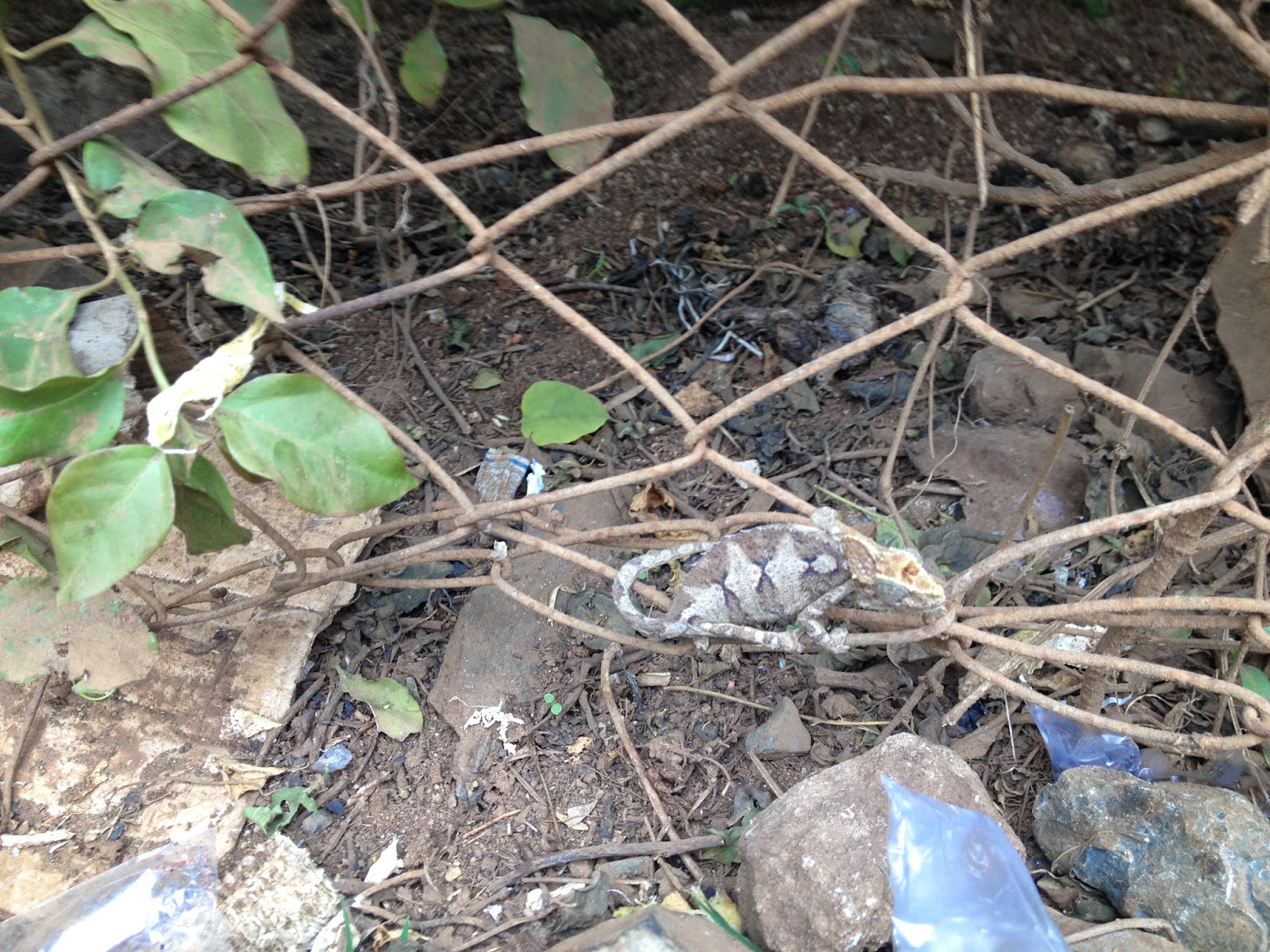 We see chameleons all over the place.  This one happened to be by the hospital.  We've found them walking home from church, on the patio, just all over town.  They are seriously interesting creatures.  They are really slow, they have these two little claw like toes, they change color.  What is not to love. 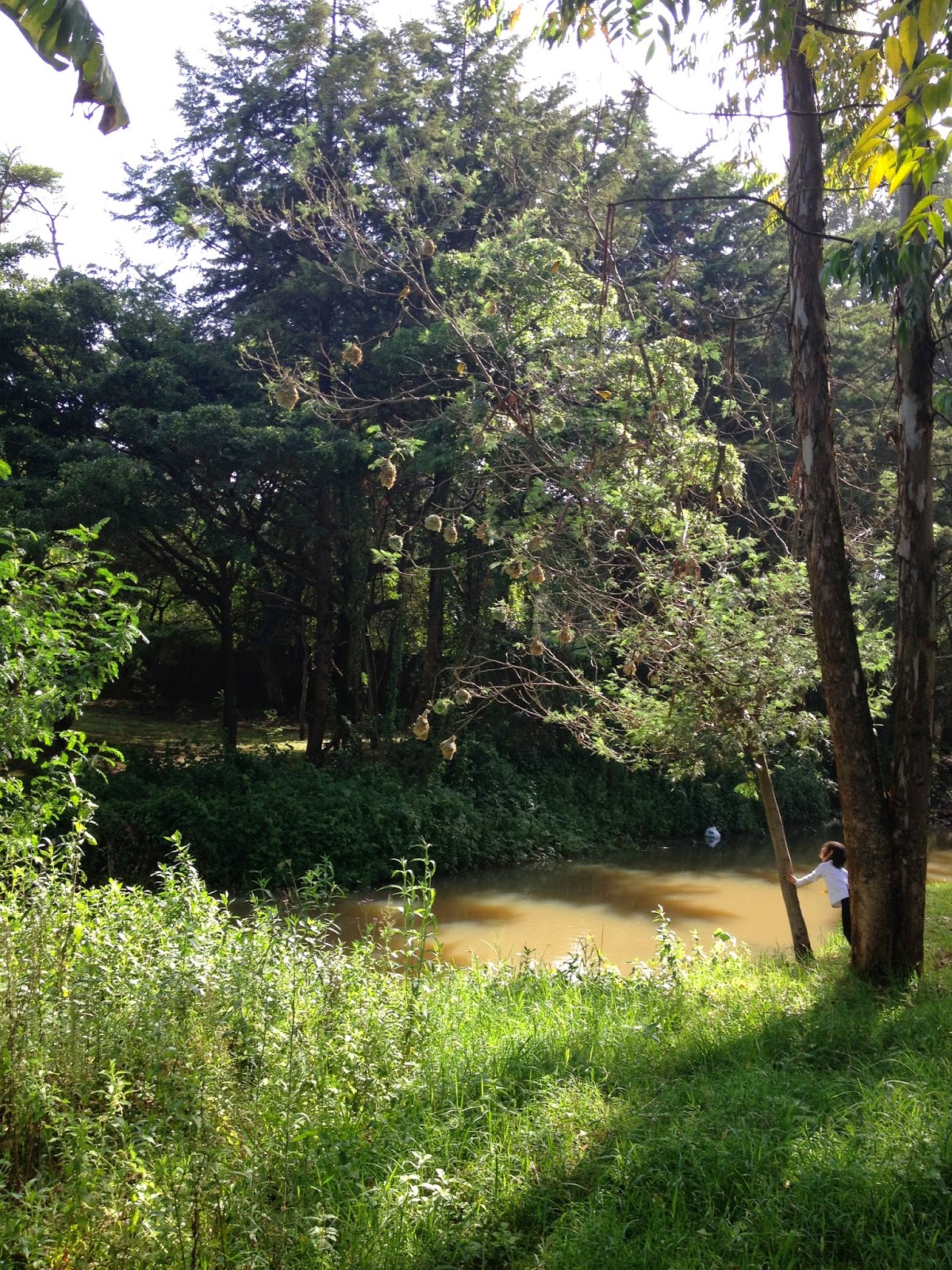 Finally there are so many birds here.  These ones happen to be our favorite, the weaver birds because they make these awesome little homes for their babies.  How they manage to weave a circle nest with just their beaks and feet is beyond me.  We can see these nest when we walk down to the end of the compound.  There is a huge house owned by an Indianan family who apparently owns a hardware store.  Business must be good because they just built a fifth, sixth, and seventh carport onto the house to keep a few more of their lovely cars covered.  A 100 yards or so from the house is a detached servants quarters where two families live. The men and woman work for the families.  Two of the three kids go to school.  The littlest one is still at home and will often follow us as we walk the compound and play with the kids.  He showed us the river about another 50 yards from his house and that is where we saw the weaver birds.  It was just crazy to me to see a species I up until this point had only ever seen in National Geographic documentaries.  Now I can actually watch them set up their homes. It is seriously crazy.