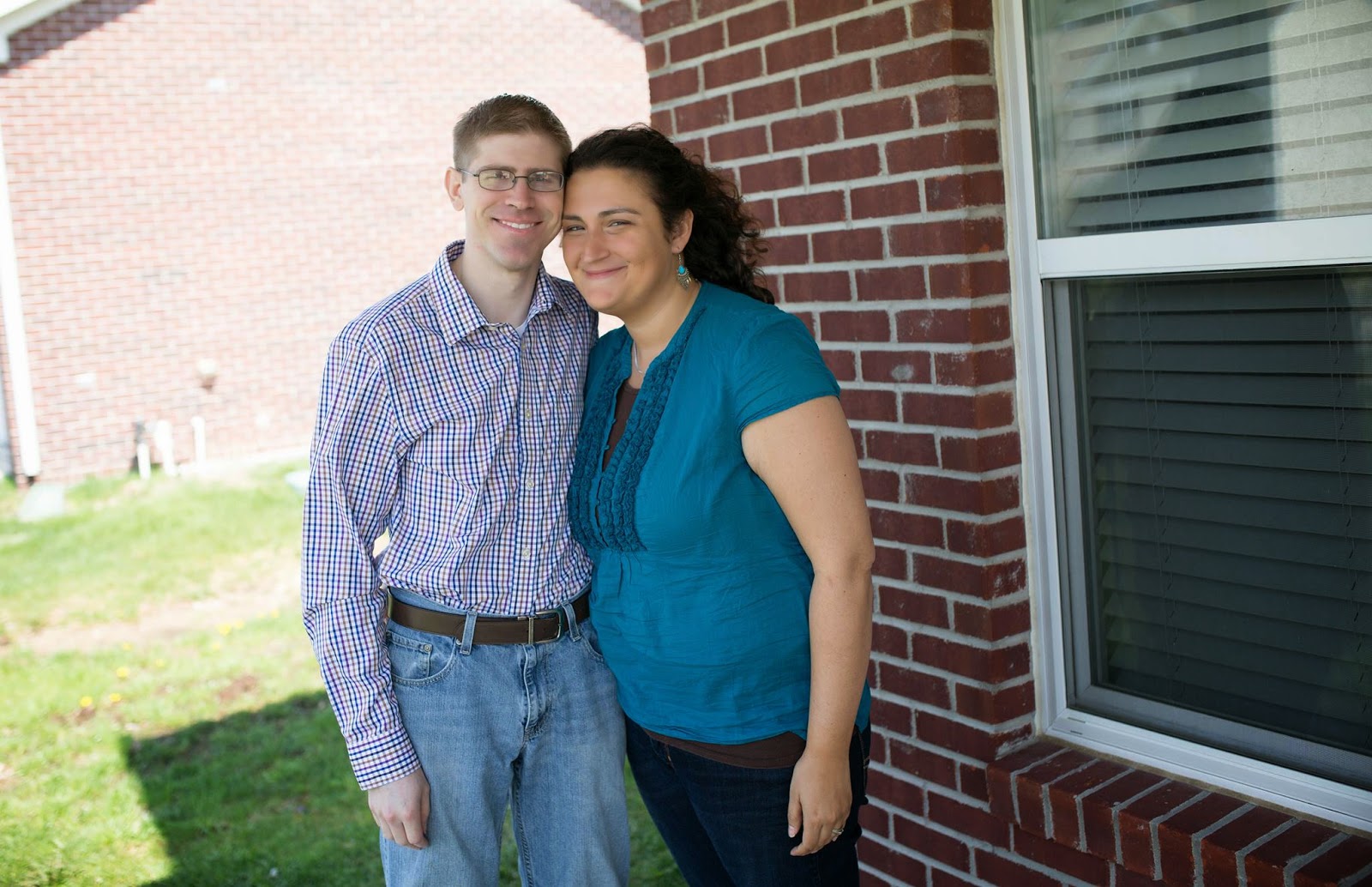 We celebrated 12 years of marriage in April which means we've been together 12 years because we got married almost as soon as we met.  Our anniversary was nice, laid back, and we went out to dinner.  We had reservations and went to a little bit nicer of a place then we normally do.  You know what I learned about nicer places...they charge you for everything.  Alright that isn't entirely true, the bread was free.  That was it.  We got to pay for all the other bits.  Do you want a salad?  You get to pay.  Do you want to want another strawberry lemonade?  It is extra.  It was our anniversary though so I enjoyed it.  Does that mean we are real grown ups now?  Marriage is a complex, wonderful beast.  It's a way to say you are committed to each other and a way for the church/the government/the community to recognize that commitment.  It is ups and downs, schooling, jobs, children, taxes, accomplishments, disappointments, extreme joys, and heartaches.  I am glad I hitched myself to this wagon even if sometimes this man drives me crazy.  We are a team: divide and conquer the kids, joint plans for the future, someone to work with and dream with.  The last few months though I've had a lot of opportunities  to think about what my marriage means, what the relationships around me mean, and if they reflect in any way on my own marriage.

My sister died last Friday.  She was getting ready at the bathroom sink while her partner Travis was showering.  They were having a conversation and then suddenly he couldn't hear her.  He pulled back the curtain to see her collapsed on the floor.  Her heart had stopped and she wasn't breathing.  Travis frantically called 911 and then in their tiny bathroom performed CPR.  The paramedics were there in minutes and with epinephrine and shocks they were able to get her heart started again.  For a day she was in a medically induced comma on cold protocol.  Then they warmed her up.  We had no idea what to expect.  When she started fighting the intubation tube we all breathed a sign of relief that she could still move her body.  It has been several days and she's a rock star.  She is up and moving and talking although she is having trouble with her short term memory and has to be told multiple times what has happened, which usually induces anxiety.  My mom texted me a few days ago about a breakthrough.  Here is what she wrote.

"Today when I saw her I said something about her test and she said "Why do I need it?" and I said "Remember your heart and your fall and can you believe it?  You've been here since Friday!"  And instead of getting all anxious and needing the hear the whole story again she just laughed and remembered enough to say, "And Travis saved me."

And Travis saved her.  I've been frustrated this last week whenever I've told the story that I don't have a better word for Travis.  In a time and place where the lines have been drawn over the marriage debate the word partner has almost become a loaded grenade.  Plus what word do I have that can explain how I feel about Travis right now.  Travis is family.  Nothing will ever take that away.  He saved her.  Without him my sister's death would have been a permanent condition.  He is her savior.  We will be forever in his debt.

It is interesting to note though for the purposes of medicine that the fact that he is her savior means nothing when it comes to making medical choices for her.  They have been living together for years, joint home, joint finances, joint life but because they aren't married my mom was the one making her medical decisions.  Luckily my mom and Travis were on the same page but it kind of bothered me and my other married sister, Ang.  Don't get us wrong, we love our mom and trust that she'd have our best interest at heart but we'd both prefer that our "partners" be the ones to make our decisions.

It made me think about my friend Scott who during a three week period this year when Gay Marriage was legal in Utah married his long time partner.  This week a federal judge ruled that those marriage would hold, that they could not be retroactively dismissed and that Utah had to recognize those marriages as legally binding.  It was a decision that brought joy for some and disappointment for others.  What a blessing for those who had those marriages performed though.  Without these kinds of protections they are not able to make decisions for long time partners and there have been cases where family has disagreed with the partner or have even had the partner banned from the hospital and the partner has no recourse.  I realize this is a sensitive subject.  I know it makes many of my friends, some of my family, and most of my church congregation extremely uncomfortable but I just don't see how people can believe that in the world we live in, the one  that has kidnapings, child pornography, rape, terrorist, bullies, human trafficking, genocides, the war on drugs, abortion the loss of pensions by unscrupulous bankers and CEOs, drunk driving, starvation, mentally ill people left on their own homeless, children dying of diseases that are completely preventable by clean water and immunizations, child abuse and neglect, wars, etc. that in this world people can think that two people wanting to commit to care for each other for the rest of their lives, that that act is the one that is going to break the camels back.  It just doesn't make any sense to me.  Maybe that makes me a bad Mormon, but it just doesn't feel that way to me.
This situation has also given me a chance to contemplate on the affordable care act.  I'm kind of in a bind over this.  There are things I like, like my completely covered birth control and things I hate, like my office now wants to charge me deductible at the time of service along with my co-pay instead of just sending a bill later in the month after billing insurance which I'm sorry, is just more convient for me.  But this story with my sister is actually an affordable health care success story.  My sister is 30 years old and though she works three jobs none of them had health insurance at a price she can afford.  For years she just tried not to get sick and avoided the doctor at all cost.  Then came the affordable care act.  She got on the exchange and got covered just a few months ago.  Can you imagine what this situation would have been like without health insurance?  She still has a high deductible of $7000 so we're trying to raise some money to help cover her cost (see the fundraiser on the right hand side), especially since she won't be working for awhile but both she and Travis have mentioned repeatedly that without insurance they would have been ruined for a very long time, maybe even life.  Knowing they had that safety net there has relieved so much stress for them and has helped them to focus all their efforts on her recovery.  It also allowed her the funds to get the surgey to place a defibulator permanently conected to her heart which will hopefully keep her alive should her heart ever get off track and stop again.  Had this happened a year ago we'd be looking at a very different story.  So maybe I'm not completely sure of the act.  Maybe sometimes when I think of it and how it affects my financial bottom line I get anxious.  Maybe sometimes when I think of the general well being of society and the system I think maybe it didn't go far enough.  But today when I think of it and I think of my sister I'm just grateful it was there.