A Week of First

It was a week of first in our house.  For the first time in almost nine years of being a parent I had to call poison control.  Can you guess which child prompted this call?  Tiny tornado strikes again.  I was standing right next to her when she made this gagging noise and started to spit.  I looked down and she'd somehow gotten her hands on a tube of super glue stuff.  Apparently she'd bitten into and her incisor had punctured a hole.  I grabbed the tube and tossed it in the trash then frantically started rinsing her mouth out and her hands off.  Then I called my pediatrician to ask their advice.  They directed me to poison control.  Just so you know my pediatrician has their number memorized.  They told me to make sure could swallow.  Since she could they advised me to just keep an eye on her and put my glue up higher...thanks guys.  Wish I could introduce you to the tornado.

Another first this week, first secret hair cut.  I feel lucky to report that only Snowball was harmed.  What a relief!  I feel very morally superior that none of my kids have ever chopped their or anyone elses hair...I'd hate to lose that distinction ;-).  When questioned as to why she did this Peach informed me Snowball was "just too hot!"  She was very unhappy to be discovered and to not be allowed to complete the job. 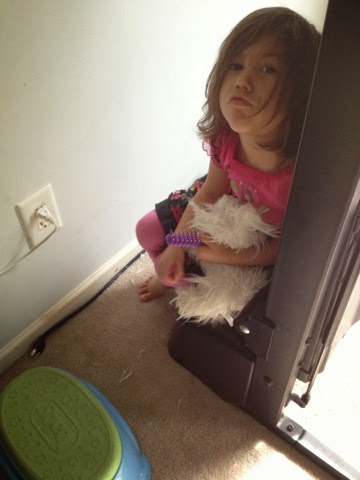 Our final first, this week Gigi started riding her bike without training wheels.  Last year when we first bought that bike she hated it.  She thought it was too high and unstable so we put training wheels on.  As the summer went on she became a speed demon.  Dr. J and I both thought it was probably time to take her training wheels off but some how we just never got around to it.  Then the bike got put in the shed for the winter.  This year we were hesitant to start with the training wheels off.  I don't know why we were worried.  She almost immediately asked for us to remove them.  For whatever reason we just didn't get around to it and then this last week she's had enough.  Her and Captain E busted the training wheels off and she was gone.  She road all over, including up hills, off the curb and into the grass.  She is loving her new independence. Yes we are lazy parents.  I don't know why it took me so long to get her started on this!
Posted by Glenda at 9:48 AM