Finally We Make It 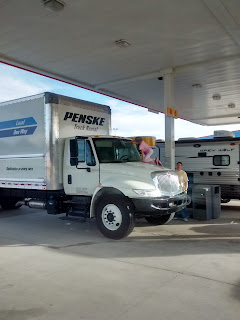 Finally on the 10th we headed up to our new home.  This time I didn't have my mother in law with me and I had to go the same speed as J so we could get there together (well I didn't have to but my choice was do that or wait forever by myself).  For future reference moving trucks go so slow over mountains.  Also it is scary watching from behind.  That truck and trailer took up practically the entire lane.  There were so many times I thought they were going to swipe something.  Luckily they didn't.  The highlight of this part of the trip for my older kids is they went with dad.  I can't imagine it was that fun, we had the DVD player in the car but I think the novelty of driving in a big truck paid off.  They had a great time.  We ended up staying in a hotel one more night before we could move in.  Then in the morning we got our keys and headed to our new places.  Lot of tears were shed.  Our house is quite nice in a nice little neighborhood but it is a rental and I don't think the people who lived here before us took the best care of it.  The backyard was a nightmare.  Pretty much they let the weeds just get four feet high and apparently the rental company just sent one guy out here to weed whack the whole thing down.  So when we moved in all this thistles were coming out.  At first we tried to tackle the problem pulling them out.  It was terrible work and didn't seem to be getting us anywhere.  We had a professional come out.  Turns out you have to literally just keep dumping poison on them.  So that is what we have been doing.  We also hired them to come and take care of all the over grown threes and bushes.  There are a lot.  It ticks me off that the rental company described the yard as "park like".  I guess that is true if you consider the budget cuts most states have suffered...SHESH!  The house itself was in better shape but it smelled terrible.  I have these suspicion they had a dog who was peeing in the house.  They had left the windows open all week before we got here and put air fresheners everywhere but you could still smell it.  Also the air conditioner was overworked from having the windows open during such a hot week and wasn't blowing any cool air.  The moving guys came and helped up unload.  FYI best thing we did on this move.  It was so nice to tell our neighbors (the bishop and the first counselor of our new ward) that we didn't need any help unloading the truck.  These guys just came in and worked super hard and then left and I didn't feel bad at all because we had paid them.  But after they left when I was trying to help J put the bunk beds together and it was so hot I thought I was going to die I had a good little cry.  The house stunk and I was hot and tired and overworked and sad.  I missed my friends, shoot I still miss my friends.  Luckily though the house smells better now...at least I think it smells better and the air conditioner is working again.  I live on a nice quiet street, next to nice neighbors, close to a school in a cute little town.  We aren't planning on staying here forever.  In fact we've probably found a house in another town we are going to put an offer down on already but I certainly do love this little town.  My kids have been happy as well and Dr. J even though he works a lot really enjoys his job.  People I'm living the dream.  Now I just need to find some friends so I won't be so lonely.