The first year of life, wow it just flies.  Ok those first two months while she was in the hospital, not so much, but every second since has just gone by double time.  I got this little crib for her last month.  Is it weird that with four kids in my house this is the first time we've ever bought a crib?  The other three had to sleep in this tiny crib (like the size of a pack n play) that friends of ours gave us eight years ago when we first had Captain E.  The thing wasn't pretty, it wasn't big, and the mattress was just this thin thing of foam that was falling apart.  It did not adjust.  It did not become a toddler bed.  The one thing it was though, was free, and when you are poor grad students with kids, free is good.  So that bed held our three other children, when they weren't sleeping with us, and from there we transitioned them into full sized twin beds.  We moved that bed through 4 moves.  The wheels broke and we just popped them off and kept using the crib.  This last move we looked at the mattress and thought, that's it, this thing is done.  I looked into getting a new mattress for it, but the thing would cost $40-$70.  Yuck.  It was then I decided I just wanted a new crib.  So I found this one online at walmart.  I used credit card reward points to buy gift cards and when it was all said and done spent only $30 out of pocket.  It is cute.  It matches the furniture in the girls room.  It will fit the adorable bedding I bought at Target two years ago for $12 (75% clearenced off).  It will adjust to a toddler bed.  Then  day bed.  She will sleep in this bed until we move three years from now :)  I might want slightly nicer things but it isn't easy to shake the cheap bug, and truly who wants to.  The crib has already had to have some adjustment.  The day after I took this picture we had to put the mattress to the lowest setting.  She is a standing queen.  She gets up on everything.  We were worried she'd fall out of the crib.

Her eyes still haven't settled.  I think they'll end up being brown but right now they are hazel, a brown/green mix.

She is a much loved addition to the family.  Of course much loved doesn't necessarily mean safe.  G bear and Captain E will often fight over who gets to hold her, while they are holding her!  Peach likes to lay on her or try to drag her around the house.  How do 4th children survive?  All three for her siblings love to feed her.  She likes oatmeal, rice cereal, carrots, applesauce, and sweet potatoes.  One day when I needed to cook and the girls were driving me crazy, Cheetah because she was hungry and GG and Peach because they are buggy I set them to work in a feeding team.  I put Cheetah on the floor in her bumbo right behind me and then gave the girls the cereal to feed her.  They did a great job.  Dinner got done and the bumbo chair was the only spot worse for wear.

Cheetah is a beautiful little girl.  When she first came home her skin was so rough and she seemed so fragile, I don't know if it was the steroids she was given, the caffeine, if it had something to do with being born early or what but she was missing that softness of a newborn.  Now her skin is like silky cream.  She has a beautiful little tan complements of her love of swimming to go along with her dark hair and lashes, and delicious rolls to make up for her skinny legs at birth.  She also enjoys taking showers and often when I take my morning shower I'll put her in the tub with me where she play with a bowl while I shave.  She doesn't seem to mind the water coming over her face and has a good time splashing.

She has a very serious look to her, almost as if she's checking you out, trying to decide if you are worthy.  Then like a ray of sunshine through the canopy of the the forest burst out with these big smiles.  She doesn't mind being held by strangers and will crawl up to any adult.  She tolerates being manhandle  by many different children.  My friend in town has a daughter just a few months older who is about the same size.  They will often sit on a blanket rolling around on each other and slapping each other faces.  I guess when you are just a few months old, scratching each others faces is how you play together :) 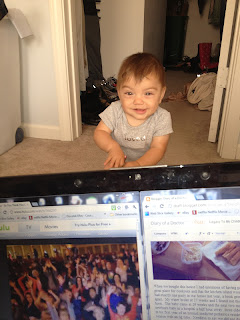 Her crawling and standing up at objects or crawling onto objects had made her very accident prone.  She's gone off the bed three times already this week.  Of course each time we were sitting right there.  I've decided from now on she is a" on the floor only while awake unless she's actually being held in your arms" kid.  So now when I'm working on the blog or watching So You Think You Can Dance or maybe doing both of those things I have to do them on the floor so she'll be safe.  She crawls around me, picking up toys, handing them to me, chewing on my toys, climbing on my lap, having a good old time.  She'll then come over and start slapping on the laptop.  She loves the laptop.  It is her favorite "toy."  She chews on the side and the chord.  She pushes buttons.  She actually looks at the screen to see if her button pushing has any reaction.  I plan to have her start doing the blogging in a few months :)


This is Cheetahs laugh.  It is a seriously the weirdest baby laugh ever.

Here is how she likes to wake up daddy in the morning.  She has super scratchy nails so it is really not fun!  Don't you love the wife who video tapes your pain rather then save you from it?  Yup I'm definitely a gem!


Finally here is Cheetah and some of her skills.  She rolls, sits, crawls, and stands up at objects. She can actually pull herself up at things although for the video I just put her up.  She eats baby food.  She sleeps through the night.  She rolls front to back, back to front.  She explores everything she can get her hands on.  First she looks at it.  Then she shakes it.  Then she puts it in her mouth.  She can pick up a puff off the floor in her thumb and finger and then get it into her mouth.  She still has no teeth, but considering she's one of my kid, that really isn't a huge surprise.