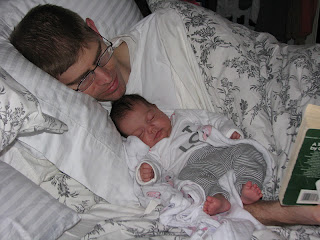 When we first moved here and knew we were going to be having a baby at the beginning of January Dr. J choose to work Christmas and take his week off in January.  Then little miss Cheetah hurried her way into our lives.  But that week came in handy when Dr. J found himself with stone.  The first night that he went to the ER they told him he had a stone 3mm by 8mm.  They hoped it would pass, but after a week it became obvious it wasn't moving.  He was stoned out of his mind on pain pills, vomiting from the pain and pills, sleeping or moaning in the tub, it was all getting to be too much.  Finally the urologist agreed to laser the thing out.  I dropped Dr. J off for the procedure and waited for his call.  A few hours later we picked him up.  He was heavily medicated and very groggy.  For the next two weeks he was peeing blood and dealing with pain, but by the end of his week off he was at least fit enough to go to work without narcotics.  These are the things we've learned about kidney stones.

1) Kidney stones are extremely painful.
2) Hot water makes it just a tiny bit less painful.
3) Pain meds can and will make you puke.
4) Ignore pain meds and pain can make you puke.
5) Having a kidney stone gives men a window into the world of womanhood.  The first night after the surgery Dr. J called me into the bathroom.  "Sweetie, sweetie, look at this!"  "What?" I asked.  "Um the toilet."  Well it turns out wives don't think blood in the toilet is that big of a deal.  Then there is the stent.  Having a stent apparently makes you feel like you have to pee all the time, even when there is nothing to pee.  And there you have pregnancy.  Also turns out that a stuck stone can actually mimic that waxing and waning pain of contractions.  The only difference...at the end of a pregnancy you have a beautiful little baby.  At the end of stone you have burning urination and a filter full of sand.

Word to the wise they have cool ultra sound technology that can break up stones now, but if you take ibuprofen they can't do it for seven days.  Do not take ibuprofen!!!!
Posted by Glenda at 7:39 AM