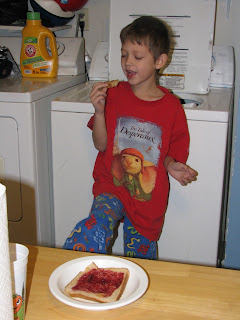 "Take a picture of me and my toast." "Why?"  "Because toast and jam is the best breakfast you can have." 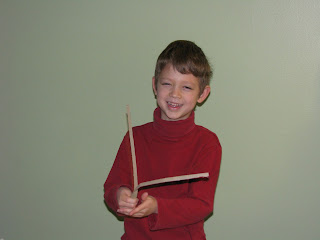 Want to sleep in, not in this house.  Captain E has been known to flog parents who wouldn't get out of bed on a weekend morning.  E wakes up early on Saturday, when you only have the weekend to play the Wii you have to make it count.  Today E said, "Mom I bet my uncles and aunts don't get anything done.  They have a TV in every room and they havea  Wii.  Their mom needs to turn their TV off.  We get a lot more done because we only have one TV in our house."  Well then, it is nice to know that even though he complains about the media rules, something is sinking in ;) 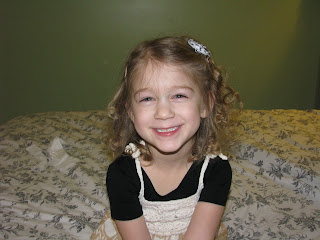 Gigi loves things that fold out.  She's been carrying a fold out map of Ann Arbor for a few days.  "Mom," she says, "Look at these pictures of my grandkids."  "G, you don't have any grandkids."  "Well I will someday, and here are their pictures." 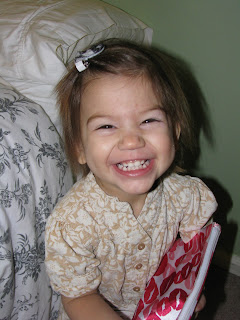 Can you see the eye makeup?  I only wear makeup on Sunday.  Not because I have anything against makeup, I'm just to lazy to actually make the effort.  Gigi and Peach love my makeup routine.  I mentioned this to my mother in law and she sent Gigi makeup for her birthday.  Every Sunday after they get dressed, and their hair done, Gigi pulls out the makeup and does blush, eyeshadow, and lip gloss.  Then she starts in on Peach.  Both of them take it so seriously.  You can just catch of glimpse of Peach's eyeshadow in this picture.  She says to me, "So pretty, so pretty."  I love hearing her little baby voice.  Last night we made cookies for family home evening.  I opened the stove to pull them out and they had merged into one huge cookie.  "Oh my," I yelled out.  Peach came running in and said, "What happen moma, what happen."
Posted by Glenda at 8:35 PM