Perhaps a picture will clear up the title a little quicker! 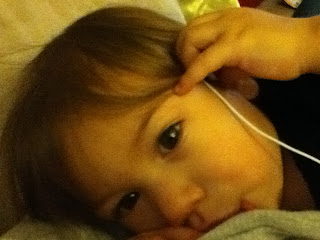 Here she is, my beautiful eighteen month old.  She has a full mouth of teeth.  She is capable of talking in full sentences.  She tries to dress herself and can name all her clothing.  She dances and tries to do somersaults.  She can use silverware and the potty.  In all ways she has skipped through babyhood into tooderland, all ways but one.  Eighteen months and the girl is still nursing.  I find it shocking.  With my son, my milk dried up at a year and he moved on to the green pastures of a sippy cup.  My first daughters got exactly ten months when a burst appendix put me in the hospital and in one night she went from nursing to formula.  It was a painful way to wean but an arm full of morphine made it easier.  I guess I figured with my third child it would be equally as "easy".  Instead Peach seems in no hurry to give up the practice.
The irony of course is that it almost didn't happen.  It took two weeks after her birth for my milk to come in.  I was in the breast feeding clinic every day have her weighed, getting advice, having my technique critiqued, measuring poppy diapers, and before and after feeding weights, taking fenugreek that made my body smell like maple syrup, and forced nursing every two hours until all that was left was scabs.  More than once I thought, quit, give up, can this possibly be worth it.  When my milk finally came in I cried out with relief.  Even in my joy though a deadline was set.  Twelve months of this I thought and then I'll be done.
I know there are mothers out there who feel a spiritual bond to their child while breastfeeding.  I am not one of them.  I love breastfeed because it provides my child with the best nutrition.  It is free.  It involves less cleanup.  It is convenient.  I enjoy holding my child.  In general I don't menstruate while nursing.  With Peach, I did finally at fifteen months out, but fifteen months is nothing shabby.
I hate breastfeeding because of cracked nipples.  No trade off for nighttime feedings.  The fact that my skin has been broken out for months.  That I can't lose weight because I'm one of those unlucky people who instead of shedding baby pounds just finds themselves in a perpetual state of hunger.  Mastitis.  And the topper, for months now each feeding has been followed by hours of pain brought on by the wringer/shredder called my daughters full mouth of teeth.
I never imagined I'd be an extended nurser.  Now I just want to figure out how to get painlessly out.  Tonight while the kids watched Olivia on the couch Peach snuck in a feeding.  I was watching netflix on my itouch when I lost sound in one of my headphones.  I look down to see that it had actually been plucked from my ear and my nursing child had borrowed it so she could hear as she watched along.  I may not have mastered my children but at least I've mastered how to entertain them.
Posted by Glenda at 10:42 PM

Email ThisBlogThis!Share to TwitterShare to FacebookShare to Pinterest
Labels: motherhood