We listen to one band in this house more than any other.  It was the second concert J and I went to together.  The first after he got his real job.  They have some connection to our hometown and our kids love them.  I mean like seriously love them.  They play so much that even J knows most of their songs.  They are not playing in our hometown on their latest tour but they were playing in our parents hometown.  I noticed they were playing in around my birthday but when I finally decided that maybe we could go there were not tickets left, except on stub hub.  I hate stub hub.  With a passion.  I hate them so much.  Then I happened to notice that they had a few meet and greet tickets left.  They were super pricey but they came with a pre-party, signed posters, a meet and greet and first sections seats.  I asked J if that was a crazy thing to ask for for a birthday.  He said yes.  Then he said, "let's do it."  So for my 37th birthday we went to see Imagine Dragons Evolve in Utah with meet and greet passes.  It was AMAZING!  Probably the best concert I've ever been too.  J agrees.  It was at an amphitheater and freezing...think mid october in Utah but the sound was SO GOOD!

These first pics are all from the pre party.  I'm going to be honest pre parties are a little silly.  It was just this tent with some candy and chips and drinks.  If were were alcohol drinkers I think pre parties would be more fun but we aren't so basically your just waiting in a tent.  They did have some super cool stage stuff for you to check out. 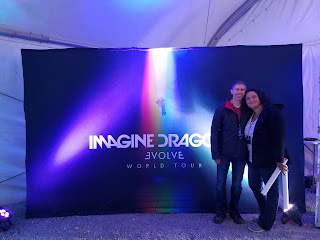 There was this awesome poster.  Everyone took a picture in front of it.  The nice thing was since there was a line you could just ask people to trade taking pictures with you. 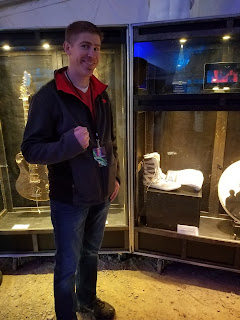 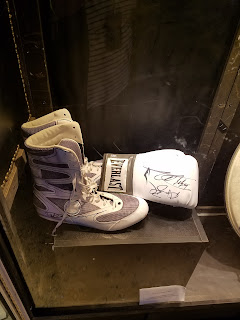 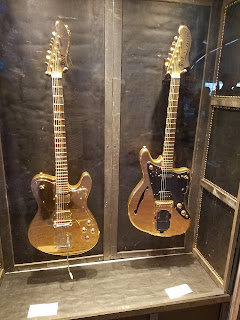 Here was some cool guitars and these awesome gloves from the Believer music video.  They were signed by Dolph Lundgren which J just thought was awesome because he loves the Rocky movies. 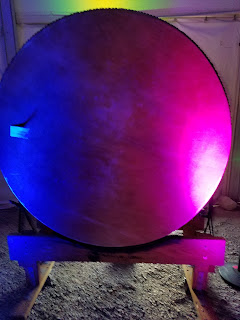 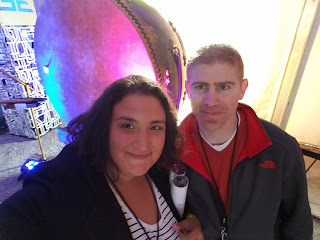 They had some drums from the Smoke and Mirror tour.  There was this huge one with the mallets there.  Everyone was just taking pictures with it and then some guy in a crazy tie dyed shirt walked up and picked up the mallets and hit it really hard and we all looked around like, great now they are going to kick us out :) 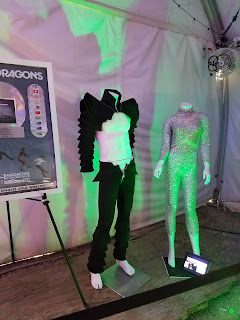 These crazy costumes are from the Thunder music video. 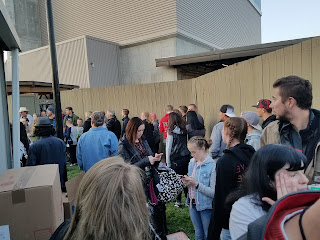 So after like 20 minutes in the tent we left to buy some t-shirts for the kids.  Then we came back and got into a big line so that we could do our meet and greet picture.  So weirdly enough the girl standing with her hand on her face, that girl has been to see them 31 times.  She is like a super fan.  She's also done tons of meet and greets.  I wish I would have gotten a picture of the girl with her head turned.  She had made full out armor with the theme of the latest cd on it.  It was pretty awesome.  It was while I was standing in this line that I started to feel super sick.  My tummy hurt a ton and I thought I was going to have diarrhea.  So talk about awkward.  So that is the feeling I had going into this. 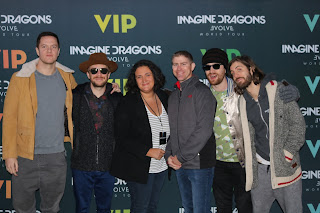 These meet and greets are so fast.  You put your stuff down.  Shake all the hands...well that is what we did, good grief we are so Mormon.  Tell them how much your kids love them.  Stand in the middle.  Smile for a picture.  Then you are done.  It was crazy fast but cool.  Would I spend the money to do it again.  Probably not, unless I had the kids because I know it was this meet and greet that made me so sick feeling.  As soon as we left I felt my stomach un-clench and by show time I was fine.  The best part of the meet and greet tickets was this below, check out our seats.  Had we picked the pit GA we could have been right by the stage because they let the meet and greet people in first but I'm an old lady so we picked seats and they were nice and close.  What a great venue!  J even let me take a bunch of selfies with him, which he totally hates.  I mean just does not like, but he was in a good mood and so he was more selfie agreeable then normal. 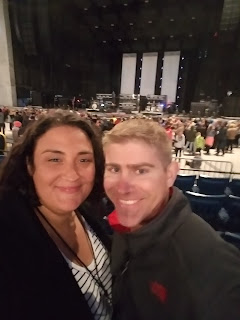 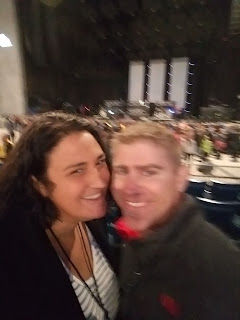 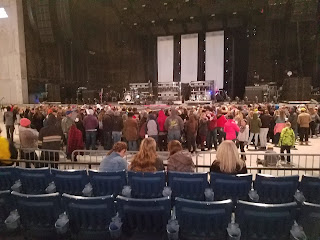 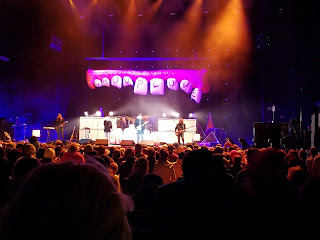 Here was one of the opening acts.  They had two.  K-Flay as well but this one was definitely the more amusing of the two.  The Group Love girl was in a full body cat suit and she was just shimming like there was not tomorrow.  It was awesome! 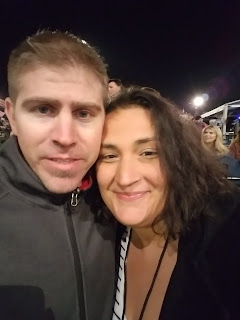 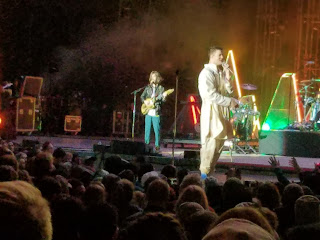 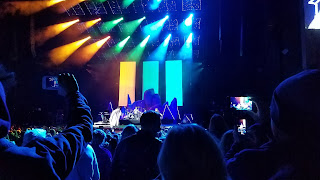 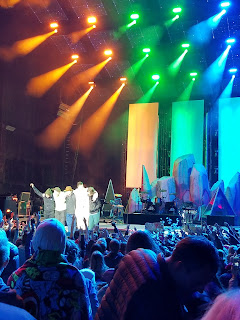