Ray Goes For A Ride 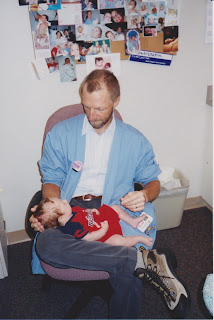 When I was a young pregnant first time mom I found myself in the capable hands or Ray Spooner the only male midwife at Carle Hospital in Urbana, Illinois.  It was sort of by chance.  I'd wanted to have the most natural birth possible to me and Carle hospital had six midwives who rotated through.  Each visit you would visit with a new midwife and then on the day of your delivery whomever was on call would deliver you.  All of the midwives were quite capable and most were very nice but very quickly Ray became my favorite.  He was a soft spoken Englishman with long hair all the way down his back.  He would tell me stories about his children, his lay midwife wife Rae, his hobbies, his travels, and because my husband was a medical student we often talked about health policy.  I still remember the last visit we had with him before Captain E was born.  He turned to us and said, "Go out to the movies and get a dinner.  Your life is about to change forever but nothing you can do will bring it any faster or slower so just enjoy these last few days you have just the two of you."  In the years I knew Ray that was always his way.  Things are going to happen like they are going to happen and we all should just enjoy the ride as it comes.  Captain E's birth was nothing like the natural, beautiful calm birth I had hoped for or imagined.  Far from what my birthing books had explained labor was extremely painful and with E it lasted what felt like forever.  The first midwife on call spent the day with us but when E's labor went into day two Ray came on.  He had a calming effect and I remember he spent quite a bit of time just rocking in the rocking chair in my room waiting for things to progress on their own.  At 36 hours though I was emotionally and physically exhausted.  As I sobbed through the contractions I remember Ray saying that it wouldn't be a failure to get an epidural.  Ray guided plenty of my friends through beautiful natural births and that was always his preference if it was yours but I really appreciated that when it became an impossibility for me he kindly guided me a different direction.  Once the deed was done he continued to rock in the chair.  We watched country western music videos, he talked quietly with my mother and sister and we all made bets on when we thought this baby would finally make his appearance.  Two and a half hours later E finally appeared.  Ray handed him over and like that we became new parents.  I remember my mom commenting later that it was impossible not to like Ray because his quiet voice forced you to lean toward.

Captain E was the only baby I had the pleasure of delivering with Ray but I saw him many times during my pregnancies with Gigi and Peach.  With my first visit with Gigi I was bleeding and I remember being worried I was losing the pregnancy.  Somehow the clinic lost that I was suppose to be seen and after waiting there almost two hours with the clinic nearing closing time they realized their mistake and squeezed me in to see Ray right before he left.  I had toddler Captain E along with me and I cried while I explained the situation.  Ray quickly got up and left the room.  When he returned he had an internal ultrasound machine.  Explaining the whole process to toddler E he quickly had Gigi on the screen.  "Look at your baby's heart beating," he said, "You are not going to lose this baby."  From that moment on my loyalty to Ray was sealed and I saw my visits to him as those of seeing an old friend rather than a health care professional.  His visits were always so laid back, full of funny stories, and he was so much more relaxed than the other midwives I always preferred him.  When the opportunity to go to Jordan pregnant arose I consulted with him first.  "Travel," he told me and he filled the appointment with stories of his own time in Israel.

When we left Urbana I was forced to find new health care options.  I've always chosen midwives because of Ray but I've never found one quite like him and yet life marches on and while normally you forget those you don't see at least once or twice a year my husband and I will reminisce about something Ray had said or done for us.  Then just this last month a friend who still lives in Urbana posted a story about Ray.  It turns out that he has ALS.  It is traveling so fast that he can no longer practice and has retired so that this month he can take a cross country bike ride across the United States because his doctor doesn't think he will have enough function to do it if he doesn't go now.  Ray Spooner is no longer practicing medicine.  His gifted hands, his healing soul will no longer be felt by the woman who visit Carle Hospital, and his soft voice will no longer be the first sound heard by new spirits entering this world.  His calming presence will be a great loss to Carle, to Urbana Champaign, and eventually and especially I'm sure to his family and friends.  This is a great man who chose a small town in Illinois to make the place of his life's work and he touched so many lives in the process.  My prayers and love go to him and his family.  This video explains a little bit about his new goal and this page links to his fundraiser.