Can I Have A Moment To Geek Out

Please allow me a moment to geek out.  I was a teenager in the 90's and my absolute favorite show was the X-files.  I had to tape it because my mom was refusing to let us watch TV on Sundays at the time, but at least we had a TV so maybe I should stop complaining....because there were a lot of years when we didn't even have one.  Sometimes I feel like when I watch what is popular now with mom bloggers that my mom was probably just 20 years ahead of her time.  Anyway I use to record those episodes and sneak them when I could.  Then when Captain E was a baby I got my hands on all the dvds from the library and watched the seasons again.  X-files is now on Netflix and so I've watched them all a third time, but the thing with series you love is after awhile you get sad that there is nothing new, so that is why today I was so excited when I saw that Fox is doing 6 brand new episodes of the X-files.  Look I think Fox is pretty much of the devil but for six more episodes of the X-files I'll drop my standards for a month and a half.  This is going to make my January!

While we are talking about media I'm looking forward too, can I also mention Southern Rites.  I saw an interview with John Legend on John Stewart where he was talking about this documentary he produced.  Dr. J and I love documentaries and the HBO ones are intense.  This one is about the desegregation of prom in 2010 at Montgomery County High School, 2010 people, 2010!  In 2009 Gillian Laub went to Montgomery County and filmed the segregate proms.  You can read about it here if you are curious.  I just don't have patience to deal with this kind of stuff and the people who think it is no big deal.  If this story was just about Prom it would still be a pretty big deal but it turns out that while Gillian was in Montgomery filming for the project a young unarmed man was killed in the county.  I know people are sick of hearing about this sort of stuff.  They've started to tune it out.  They look for justifications about why people deserve to be shot.  They rant and rave about riots and federal oversight instead of taking a deep look to see if there might be some deeper underlying illnesses that we need to take care of.  They post news feeds on their Facebook about how the first American slave owner was black as if that in some way justifies the history that follows.  News flash people, it doesn't.  Stop trying to justify.  Listen, make yourself vulnerable, ask the tough questions.  If you are personally guiltless then look around in your community and see if there is something there that you can put pressure on to fix.

I know it is rough to have empathy for people outside yourself or people you aren't related to but it's important.  In the US we spend 74 billion dollars a year because we fail, we all fail, to bring people into productive society.  Did you know that in this country while only 30% of the population is of color that they make up about 60% of the incarcerated Americans.  The incarceration rates for men goes like this, 1:15 for African Americans, 1:36 for Hispanic men, 1:106 for white men.  Ask yourself seriously, do you believe that there is something inherent to not being white that makes people more likely to be criminal?  Do you really believe that?  Would it shock you to know that the majority of people go to prison for drug offenses?  Would it shock you to know that the rates of drug use and sales is pretty even across the board for whites, blacks and Hispanics and yet people of color are arrested at a much higher frequency, are incarcerated at a much higher frequency, and are given much more severe sentences for the exact same crimes.  Would it surprise you to know that studies have been done that find that people of color are much less likely to get job interviews or jobs even when presenting the same qualifications as whites?  Would it surprise you to know that at all levels of education blacks and Hispanics are paid less. 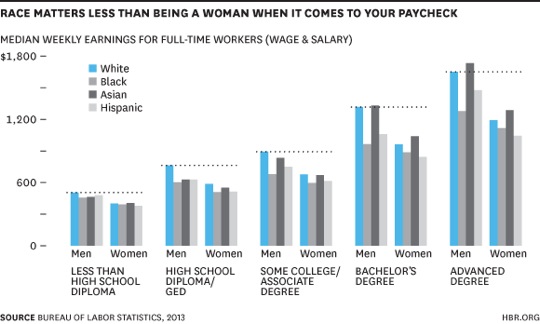 I got this nifty graph from hbr.org from the article "Does Race or Gender Matter More to your Paycheck" by Deborah Ashton.  There is lots of research done on this though and if you listen to NPR or the BBC you'll often be lucky to hear about it without having to search journals but it is there so it's not like it isn't easily accessible.  Would it surprise you to learn that schools of low income children, the ones most likely full of black and Hispanic kids get less money?  So basically children in Title I schools who probably could use the extra support aren't getting it because their districts have less money to spend on teachers.  Would is surprise you to know that banks are less likely to give African Americans and Hispanics home loans or small business loans.  Across the board time and time again research shows that when we control for all other factors race still plays a role on how good the education you get will be, how many opportunities you will have, and ultimately what type of life you will have.  When you say stuff like this people want to throw out guys like Ben Carson or Alfredo Quinones and they will say, "These guys made it, why can't the rest of you?"  And you know what I have to say to those people, those guys worked hard, and were amazing, and were just fraking lucky?  Do you work that hard?  Are you that amazing?  Were you that lucky?  The truth is very few of us were or are but the reasons those cases stand out is because they were able to overcome what is obviously a system problem.  People we have a system problem.  We are not responsible for the things of the past.  As my cousin so tactlessly pointed out this week, "Our family never owned anyone."  And you know what, she's probably right.  But even if our family had owned someone we personally don't own that autrocity.  But the atrocity that we do own is that the research is all around us that our system is broken and yet we refuse to admit that and I'm telling your right now if we can't open our eyes to face it we certainly aren't ever going to be able to fix it.  So I'm going to watch Southern Rites and I'm going to keep my eyes open and while I can't do anything about the past I'm sure as hell going to do something about the present and future.  If you want to live in denial land I can't do anything to stop you but living denial isn't going to make the problems go away.  And just an FYI if you happen to listen to a particular "News" station (I say news loosely here, Dr. J personal thinks we should have federal oversight that forces them to just call themselves the Conservative Daily Show because news is a little misleading) that denies all the research in pretty much the whole academic community it might be time to ask yourself, "Do these people have an agenda?"  I'm just saying.....