Nobody looks good in scrubs... 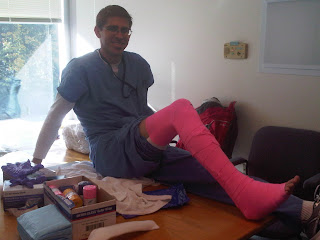 I had this really embarrassing foot in mouth moment over Easter Weekend.  We went up to my friend Jessica's mother's house for dinner.  More on this later because I actually took a few pictures and at one point I was in the kitchen with my husband, her husband, and her husband's cousin's husband who happens to be an orthopedic surgeon and we were talking about Dr. J and his new job (starting in July) as a pediatric/internal medicine hospitalist.  Just in case you were wondering this is a little odd.  Most places want to make you specialize but this is a small hospital so this is why he gets to do both, the reason we are moving to this small town in the first place.  Anyway Jessica's husband says to J, "So you are going to be Doctor Karev?"  And J is like, "What?" because even though I have watched like seven or eight seasons of Grey's Anatomy he has never watched a single episode with me.  And then the cousin's husband says, "You know on Grey's Anatomy."  And so this starts a conversation about Grey's Anatomy and then I say, because I really believe this is true, "Nobody looks good in scrubs."  And the men start to laugh and say, "What, don't tell me you don't think that Mcdreamy looks good in scrubs?"  And I'm like, "No, I mean he looks okay it's just he looks way better not in them."  And what I meant was, "He looks twenty times better in other clothes." but what they all heard was, "He looks way hotter naked."  Oh man those three just started to roar and then I'm trying to explain myself but my face is getting more and more red, I mean I'm just dying.  Then Dr. J says, "Look how red your face is."  And then they were just laughing harder and then I just had to get out of there, because my ears were seriously burning.  But here is the thing, nobody does look good in scrubs.  If you are a rounder build like me you look like a sausage.  If you are a thinner build like J you just look gaunt.  They make your shoulders slope, they either hang low on your waist or you have to cinch them up super high at a level reminiscent of Urkel, and they give you a flatter butt then mom jeans or those atrocities the President wears.  They make sense when you consider you might have to catch a nap in them, that they are easy to change, and easy to clean, that you don't have to spend a lot of time matching bottoms to tops, that you don't have to worry about people puking, bleeding, or pooping on them but attractive clothing they are not.  I submit in my defense these pictures. 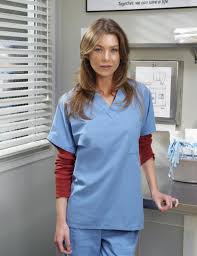 And here is the one I relate the most too because yes sometimes I like to do projects in scrubs because they are comfy but look at Chandra Wilson in scrubs versus in an outfit she picked herself.

Sure these people are all hot but they look so much hotter in regular clothes.  So maybe what I should have said is most of us look better in outside clothes rather then scrubs because scrubs are just like wearing blue sacks of flour.  That works right?  I can say that without my ears getting red.  But maybe I should be grateful for the lack of sexiness of scrubs.  The question I get asked the most when people find out I'm married to a doctor is, "What does he do?"  The second most asked question once they hear he works at a hospital, "Is it like Grey's anatomy?"  Well I'm the stay at home wife, so honestly I have no idea, but after watching seven seasons of Grey's anatomy I can honestly say, I certain hope not :)
Posted by Glenda at 11:05 AM