My Favorite Literary Character From My Son's Perspective

We had a TV growing up but most of my life it wasn't hooked up to anything.  My mom did let us watch movies though, mostly musicals and PBS and books that had been made into movies.  One of my all time favorites was the Anne of Green Gables and Anne of Avonlea the 1985 and 1987 versions.  I watched those movies a lot.  I also read some of the books although oddly not all of them (I think I should revise that) and when my kids were younger I read them the first book Anne of Green Gables (I probably should read more of series to them as well).  I just barely introduced the family to the Anne of Green Gables 1985 movie though.  I was so excited to share it with them.  Anne is such a spunky character.  I knew the kids were going to love her, and for the most part I was right, the kids did love her.  All my kids except one. 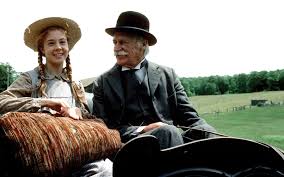 It isn't surprising that I loved Anne as a kid.  Anne was an orphan but she was so positive.  She was smart and eager to learn.  She was competitive and could beat all the boys.  She was adventurous.  She was mouthy.  She always seemed to be getting herself into trouble.   She was cursed with bright red hair that while she felt insecure about it, added to her charm.  She also had the perfect beau, Gilbert Blythe, her long suffering admirer really goes through the ringer for Anne and what girl doesn't want to be loved like that, unconditionally. 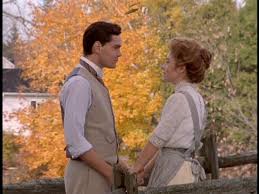 So I was excited to share this with my kids.  But while we were watching we got to the point where a certain Gilbert Blythe mentions Anne's red hair.

This scene is critical to the rest of the movie because it is the seed of Anne's grudge against Gilbert, which keeps his love unrequited for years.  This never bothered me as a kid.  The thing about woman is they don't seem to mind tortured relationships but when my son saw this and then all the slights that Anne does toward Gilbert as a result of it he turns to the whole family and says, "Anne is a jerk!" "No she's not," I instantly responded.  My husband happened to be walking through the room at the moment, "Yes she is."  "You guys are crazy!"  But then I started to think about it, and you know what, Anne sort of is a jerk.  She holds a grudge on this for so long even though Gilbert is one, obviously just trying to get her attention and two, from this moment on makes it clear he is apologetic, very interested in her, and continues to make huge sacrifices to improve Anne's life.  Funny how it took having a son to look at this story from Gilbert's side and darn it, the kid is right.  I've decided to hold off introducing the kids to Anne of Avonlea.  Don't want the kid ruining that one for me :)
Posted by Glenda at 5:45 AM