What Would Bridget Do?

Eight years ago I met two girls on a study abroad trip our husbands were all participating in one way or another.  There were other tag along spouses on that trip but those two were the two I felt the most kinship with and so eight years later even though we have never again lived in the same place I'm still following their lives via blogs, Facebook, and messenger.  Sometimes I feel like I know more about what is going on with them then I do about my friends in town.  I love reading about what they are up to because they are adventurers, they do things that are a little out of the ordinary.  This last couple years our friend Bridget has really just been amazing.  While her husband was working full time as a professor and she lived on the other side of the world from her extended family, while her girls were in school, and she was pregnant and then had a newborn she went back and got a masters.  She taught classes, and graded papers, and wrote her thesis all on top of doing the other things that I normally get done.  Since then along with working she auditioned to be the pianist for the vocal masters classes and a student choir and she got the job.  I was really inspired by how she's pushed out of the boundaries of her own comfort.  Sometimes I feel like middle age/the parenting years is the time when you get stuck in complacency.  Before this time you are going to school, getting new jobs, experimenting while you try to decided what you want to do with your life.  And then you settle down.  You find the guy you like and you stop looking, you find the job you like and you hope you can keep it forever, you have kids and they suck up all your energy and time and you just stop learning and pushing.  I'm not saying that these things are bad, I'm just saying, I looked at myself this year and I thought, I'm sick of letting fear keep me in the status quo.  And so I've started to ask myself when I'm faced with a situation I don't like, "What would Bridget do?"  Here are two examples for your reading pleasure. 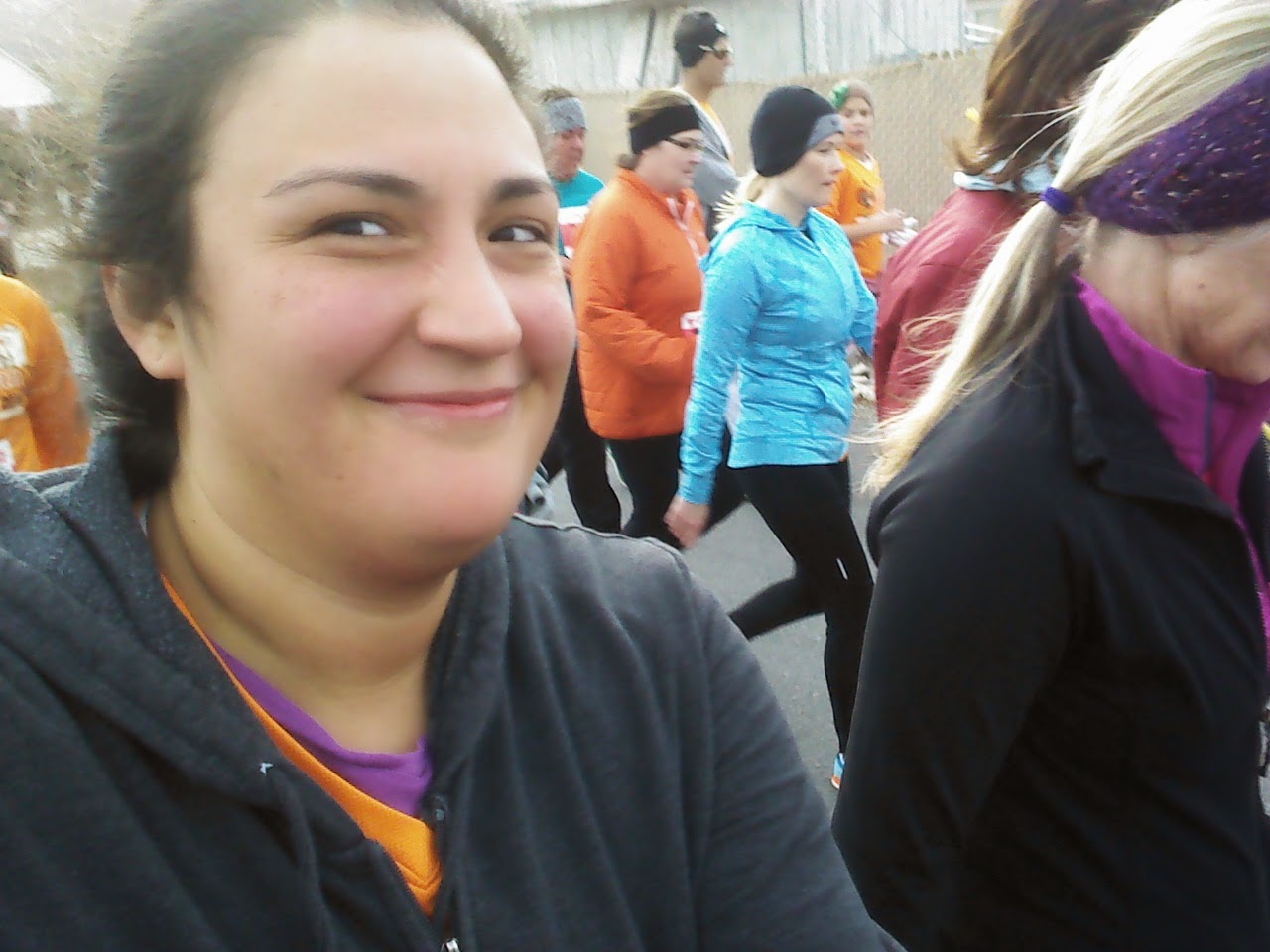 The first one was when my mother-in-law invited me to do a 5K with her Thanksgiving morning.  She brought it up two weeks before Thanksgiving and I immediately said NO!  First off lets just point out the obvious, I don't have a body meant for running.  Drought time, sign me up, I'm going to make it.  Running from invading forces, not so much.  I've got a lot of weight to carry and I've got short legs to carry it with.  You know those people who are long and lean...well I'm the opposite.  Secondly, I'm not in the best shape right now.  We cut our gym membership this summer when we were trying to cut all our expenses to well...zero and to be honest with homeschooling the kids, I'm just kind of trying to keep my head above water right now.  So there have been times when I've run a little bit, but this is not one of those times.  Third, it's Thanksgiving.  We had a lot to do on that day, it just didn't make any sense to me to sign up for a race.  And then the thought came to me, "What would Bridget do?"  and so without really even thinking about it I called my mother in-law back up and I said, "Yes."  So my mother-in-law signed me up and even though I told myself a million times this was the stupidest thing in the world, 6:30am Thanksgiving morning I found myself bundling up and heading to the outlet malls for my first official race ever. 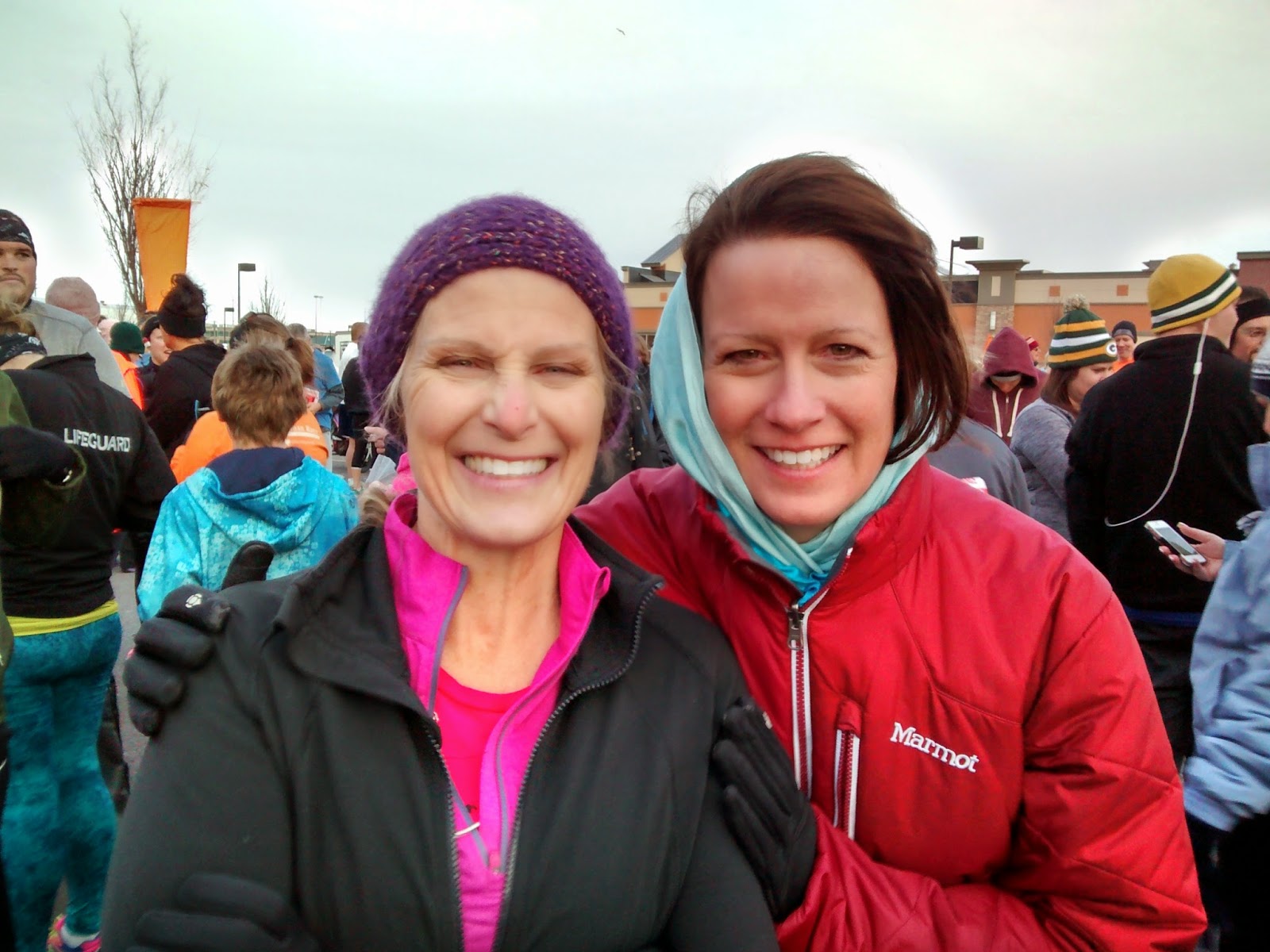 It was actually a blast.  This race is held every year to raise money for a local food bank and while there were a few competitive runners, most people were just there to have a good time.  There were a lot of families.  Along with my mother-in-law, J's uncle's girlfriend was doing the 5K with us, and his uncle, aunt, and his cousin's wife were running the 10K.  It was great.  There were still a few moments where I was like, "What was I thinking..." mainly when it was freezing at the very beginning, and then when I started sweating so much at mile one that I stripped off and was then carrying half my stuff, but it was super fun.  I would definitely like to do this again, and who knows maybe even want to get in shape enough that it would be such a dreaded thing :)  Plus when it came time to sit down and eat I actually felt not so guilty doing so.

The second thing that happened is the ward choir director asked me to sing a solo in our ward Christmas meeting.  My mom is a great alto singer, and man the lady can belt it.  When I was a kid I grew up singing duets with her in church, listening to her sing in the Arizona Mormon Choir, or having people turn around and compliment her on her signing voice.  My former step father actually heard her singing at a conference he was at and came home and told his mom all about this amazing singer he saw....turned out his mother knew her and that's how they met.  So I briefly enjoyed singing along with her.  When I was in Junior High I joined choir and I had a lot of solos but by the time I got to high school I was much too shy to audition.  And so my formal singing training pretty much ended there.  I still enjoyed singing, but I didn't necessarily like doing it solo and I'm not really into the whole ward choir scene.  I've been forced into a few musical numbers.  After we got married we served two and half years in a small branch where I had plenty of opportunities to sing.  It's hard not to be heard when there are only 16 people in sacrament and so my branch president would rope me into singing duets with him.  I didn't really mind though because he was a sweetie and at tops there was like 30 people who would hear us.  I also sung one musical number when we were in Jordan with Nancy.  It was Nancy and her husband Andrew and then some other random dude whose wife Ariel refused to sing.  I don't know how I got volunteered but it was sort of awkward.  When we returned to our regular ward I remember singing one musical number with six or seven other girls and my only real memory of the experiences is my next door neighbor came up and said, "Wow, I didn't think that was going to be any good, but you guys sounded great."  But it was in that same ward that I sort of decided choir and musical numbers weren't for me.  I can't tell you how many amazing singers we had in that ward but their were a ton.  People who had trained in music as their college degree or sometimes even degrees, people who had perfect pitch ear training, people who could read music quickly and singing everyone's parts just off that top of their head and I just wasn't one of those people.  Plus my husband was super busy, works most Sundays and keeping track of my kids during choir practice or performances just was a major hassle.  I let any performing go and haven't really minded that much.

But a few weeks ago the chorister of our ward choir asked me to perform a solo (she by the way has an AMAZING VOICE...I mean just lovely) and I really wanted to tell her no, in fact the word was right on the tip of my tongue and then once again I seriously thought "What would Bridget do?" and I said yes.  And so that's how I ended up singing Silent Night in our ward Christmas Program on Sunday.  I was not feeling great the previous three weeks when I had zero voice and couldn't even practice.  The pianist had picked out a Sally Deford arrangement I had never heard before.  When Sunday came around and I was finally able to sing it for the first time Dr. J told me he hated it....the arrangement he claims :)  I was myself not feeling very confident about it, especially since my voice kept cracking and the nerves were starting to get to me.  I sung it a couple more times, brewed myself a cup of throat coat tea and headed off to church to practice one time with the music before we performed.  Curse you Bridget I thought as I went on to meet the fate that my desire to take more chances like her had lead to.  When I got to church we went through the number once and realized it would be OK.  Then the choir director asked me to join the choir.  Turns out I wasn't the only one suffering from laryngitis this week, 1/2 the choir was gone and Jenny's voice was almost completely gone.  It really was a great experience.  I don't know how the number went, I tried to block most of it out.  I prayed before that my voice wouldn't keep people from feeling the spirit (I was seriously concerned about my cold) but my former Sunday School girls came in and told me they got goose pimples so I think God was with me there, but I have no idea how often I looked up or if I was connecting, projecting, or if I biffed it in any noticeable way.  Dr. J's only comments were, "I still hate that arrangement, your voice was fine."  So thanks for that honey ;)  But the rest of the program was just so great.  I was so happy to be with the rest of the choir singing my praises to God.  Singing is one of the few times I actually feel like I'm fully worshiping, like I'm totally committed to God and it felt so good to be a part of that moment with those ladies (there were only two guys not sick, two guys).  So I guess I should thank you Bridget.  Thanks for pushing.  Thanks for being an example.  Thanks for helping give me a reason to face my fears and not let them keep me from doing the things I want to.  Maybe someday I'll move past these baby steps and be able to WWBD my way into the big leagues of cool life changes :)