Ruler Height Chart Project for Under $20 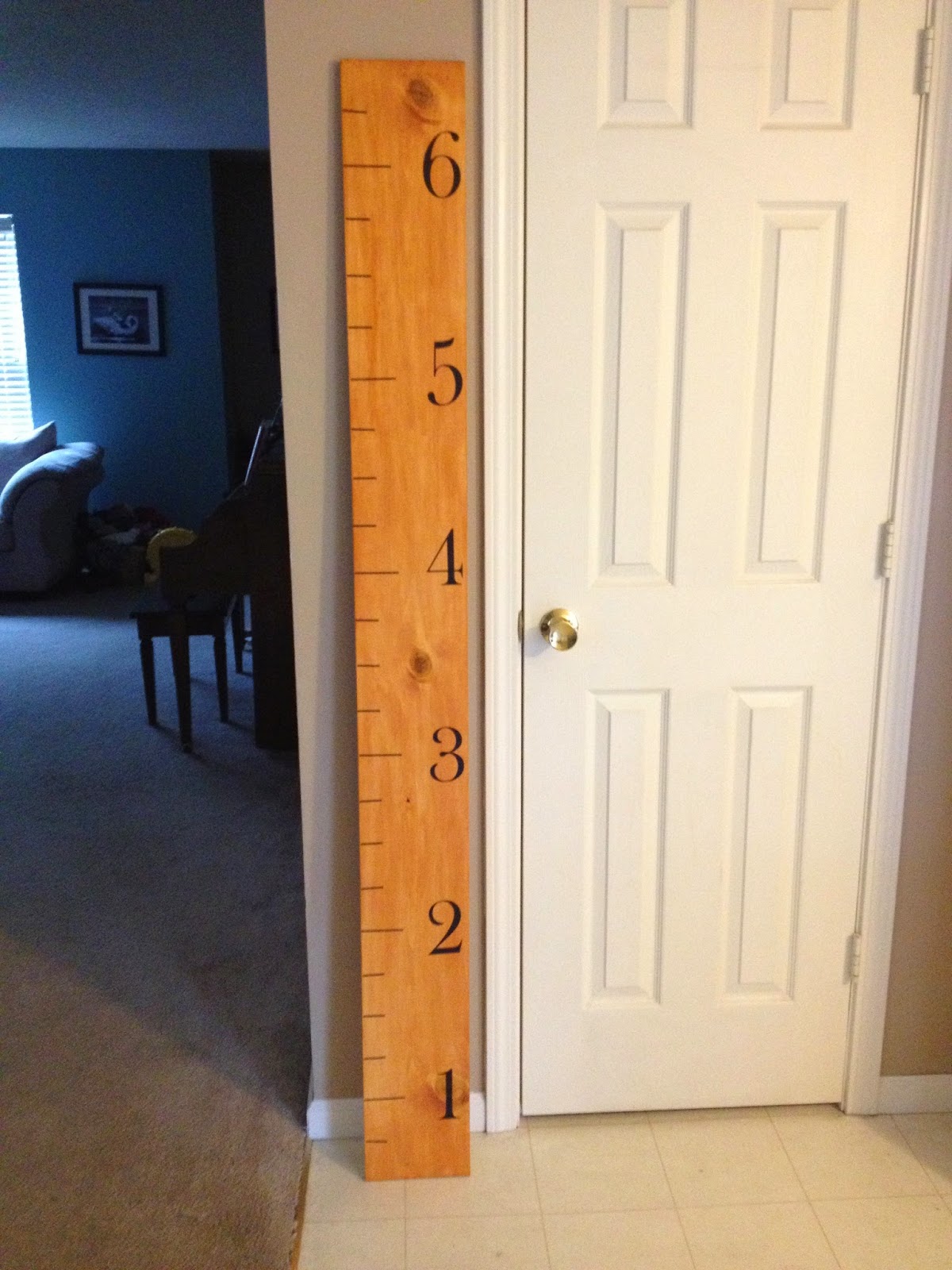 I finally finished it!  I've been wanting to put together a ruler growth chart for a long time now.  The kids love measuring themselves and seeing how much they grow but marks on the wall can't be taken with you.  When I first saw these on Pinterest I thought, "HELLO PERFECT!"  I actually ordered these vinyl numbers off a craft web site, but it has been a few months so I'm not sure who it was.  I've seen them on Etsy though or if you have a Cricut or a friend with one though you could easily cut your own.  I've also seen people just write the lines and numbers on with permanent markers or paints.  I don't think I have those skills but if you do that would make this project even cheaper!  This piece of wood I got at Home Depot. It is called common board.  I like it because it isn't as rough as some of the other "outside" woods they have there.  I looked for a piece that was relatively straight.  It is going to be on the wood so I don't want a lot of curve.  This pieces was 1 inch, by 6 feet, by 8 inches.  When I first told Dr. J it was 6 feet he said, "Wait what if Captain E is taller than that."  Hello wishful thinking :)  Dr. J is 5'10", I think hitting six foot is maybe a top off for our son, but since my brother are both 6'2" I guess it wouldn't kill us to have a little extra room on there.  The thing is I'd already planned for that.  Because almost every house in the world has floor boards these growth charts are started at six inches.  That way you can put them up six inches from the floor and they will sit flat without bumping over the floor boards.  The board cost me less than 5 dollars. 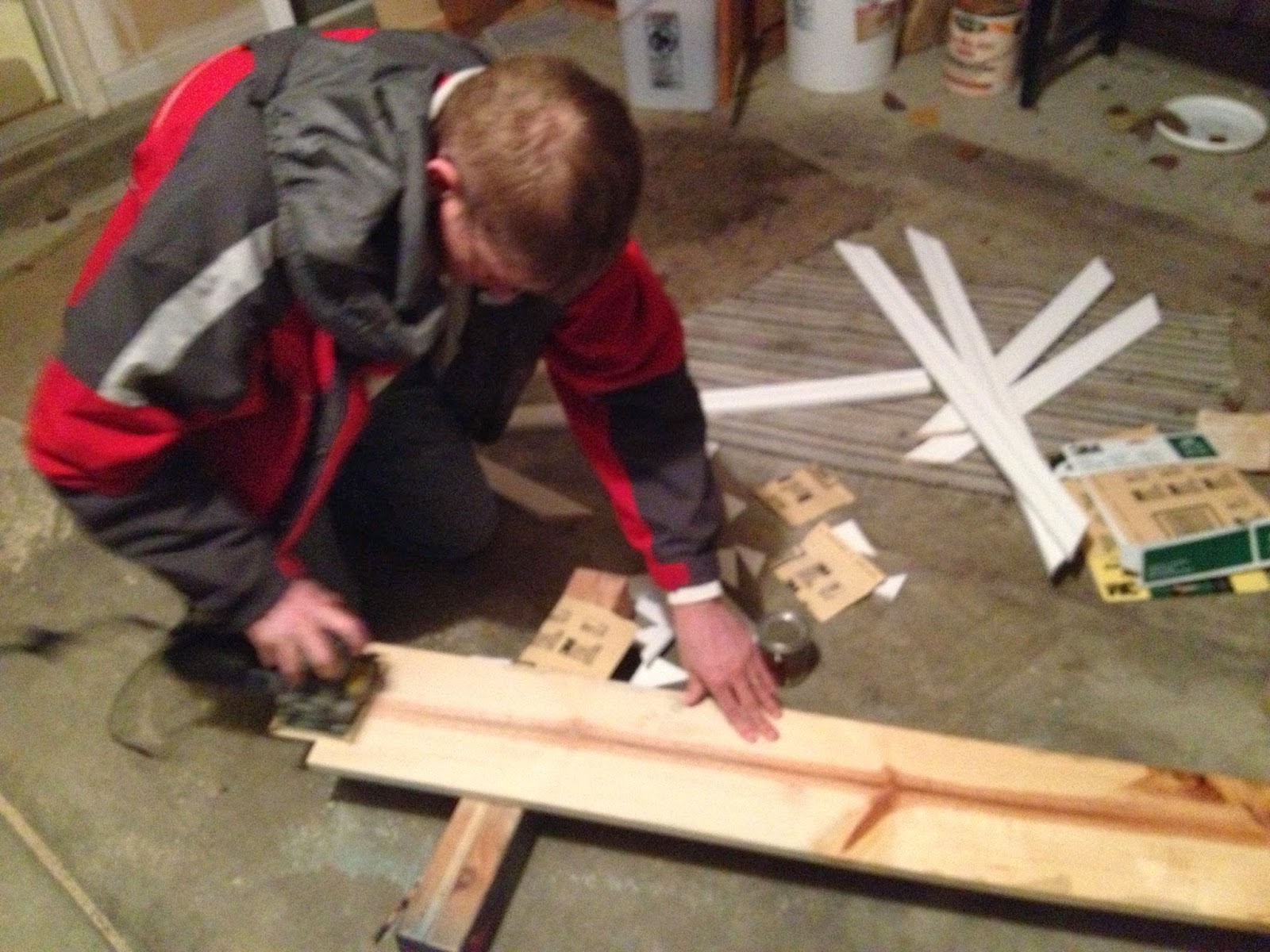 Even though the board was in my opinion pretty darn sooth my hubby took a few minutes to sand it down.  Thanks baby.  Then we wiped it down and I set to work on the stain.  Originally I wanted to paint it dark or white because I love all those colors furniture wise but when I was looking for stains I didn't want to buy a ton of stain because I knew it wasn't going to take much.  I found this color 716 Cedar Natural Tone at Menards in a sample size.  It was a stain and sealant in one, semi-transparent Pittsburgh Paints.  The 8 oz cost me less than $4 and I still have plenty left in the can.  Dr. J (who loves oak and pine colors...blah) loved this color and I even though I usually prefer other colors I think it looks pretty darn nice.  It kind of reminds me of a antiqued ruler color.  After the stain dried I put a coat of fast-drying Minwax polyurethane semi-gloss.  I don't know that it was really necessary after the two in one but I had it on hand so why the heck not. 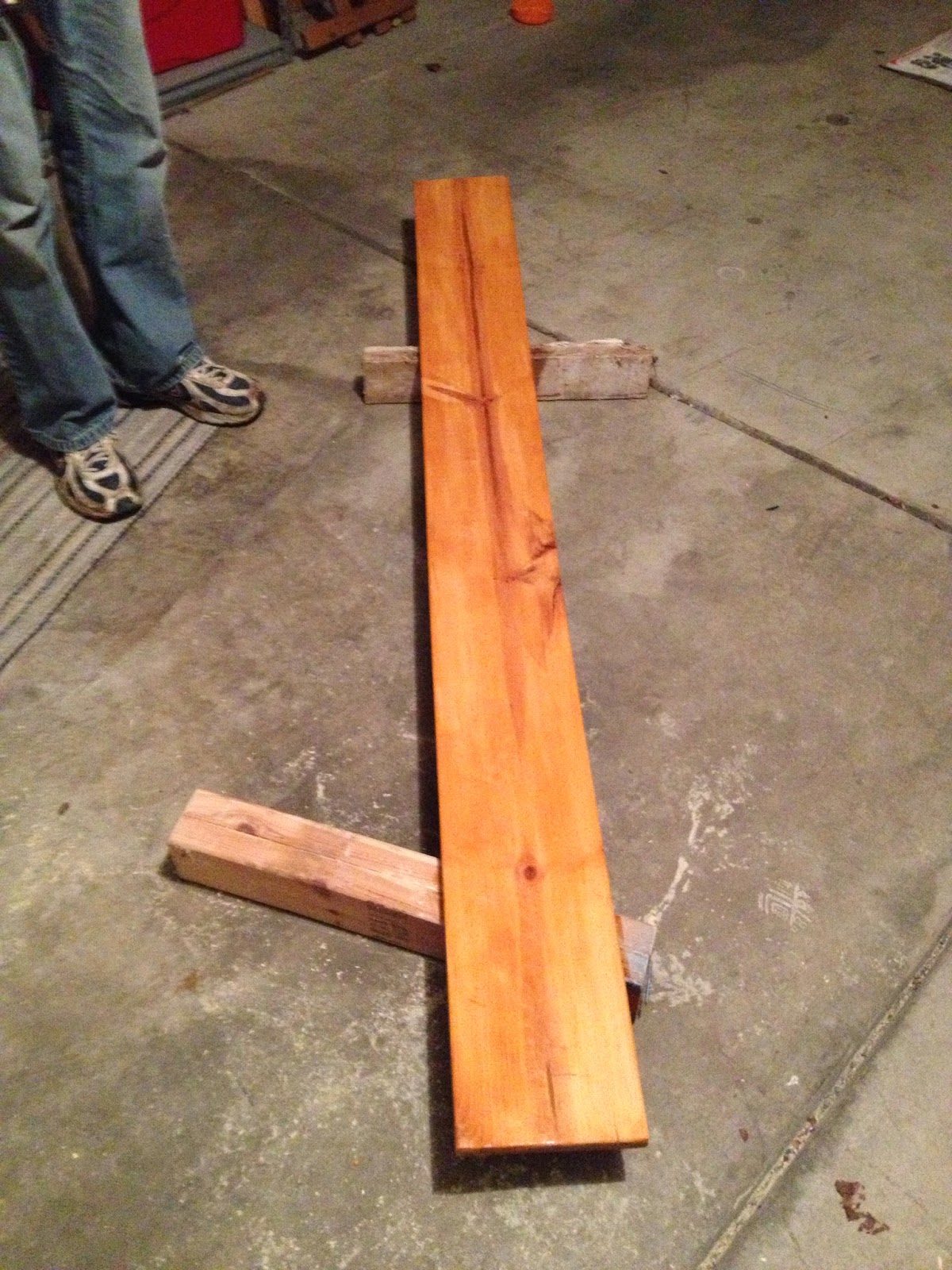 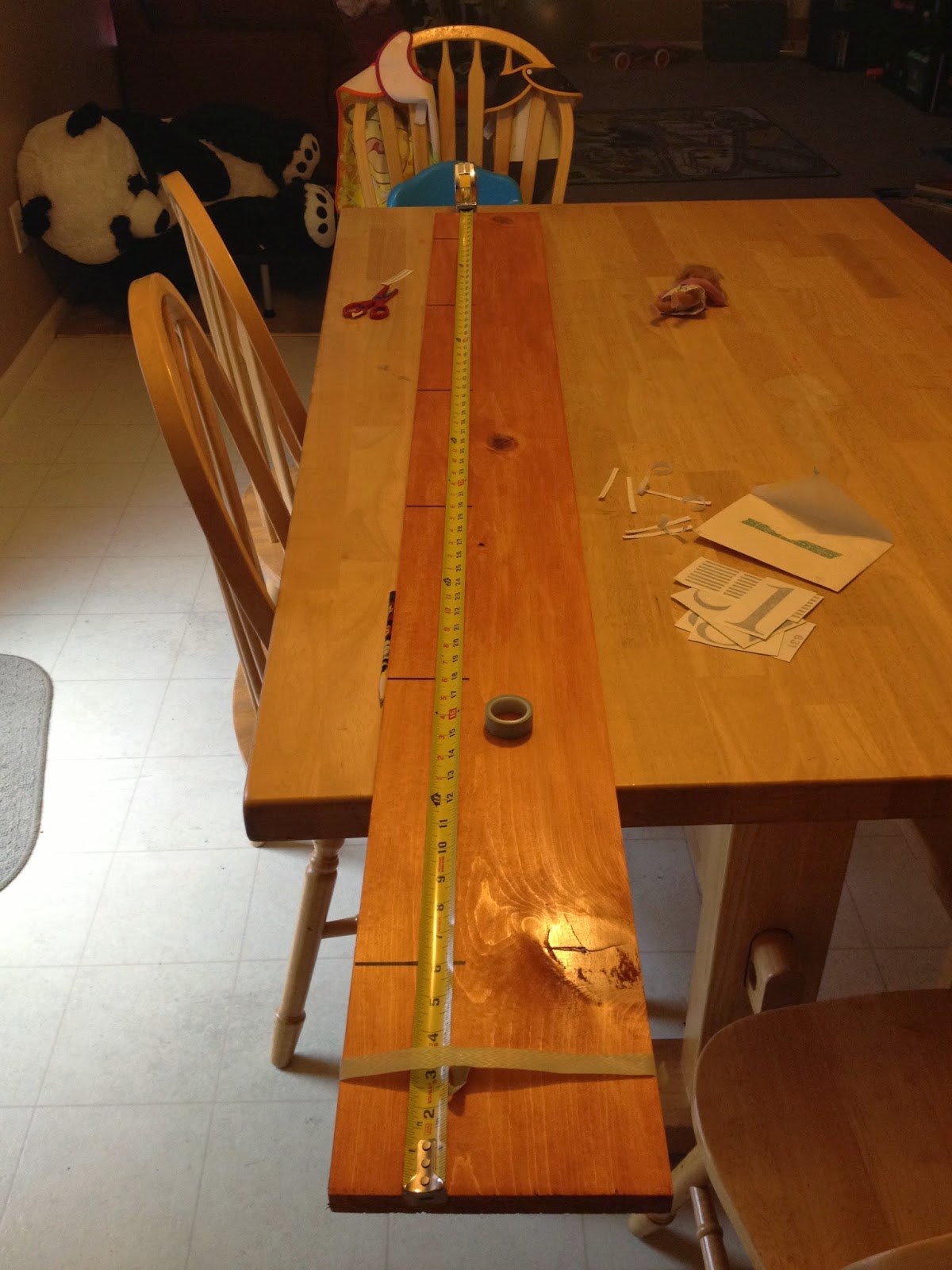 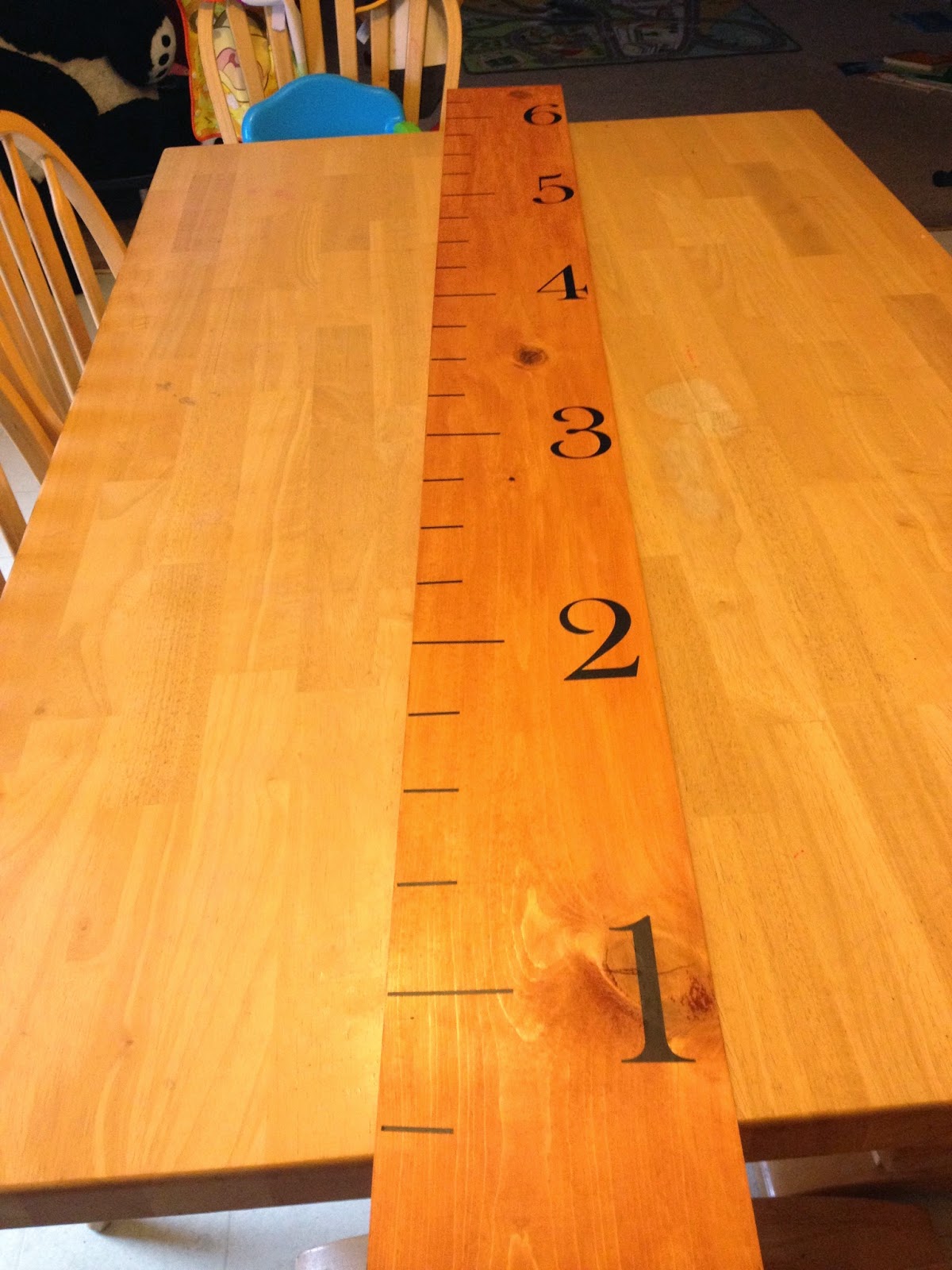 After the wood dried (over night) I put a measuring tape on the wood and used it to put the vinyl on.  At first I was getting all stressed out about the placement, then I thought, "Glenda, settle down this is for your enjoyment."  So maybe my lines are as straight as they should be, but it went relatively fast, and I'm happy.  Then I put the numbers on.  Originally I put them really close to the lines but then I realized I'd probably prefer to have more space there to mark the kids heights, names, and dates, so I moved them closer to the other side and I LOVE IT!  Seriously can't wait for Dr. J to get home so I can get it up on the wall and start marking the kids heights.  They are super excited.
Cost Break Down
Wood-$5
Vinyl -$10
Stain -$4